MQ talks shop, talks shit, and steels herself against intimacy because she is strong. 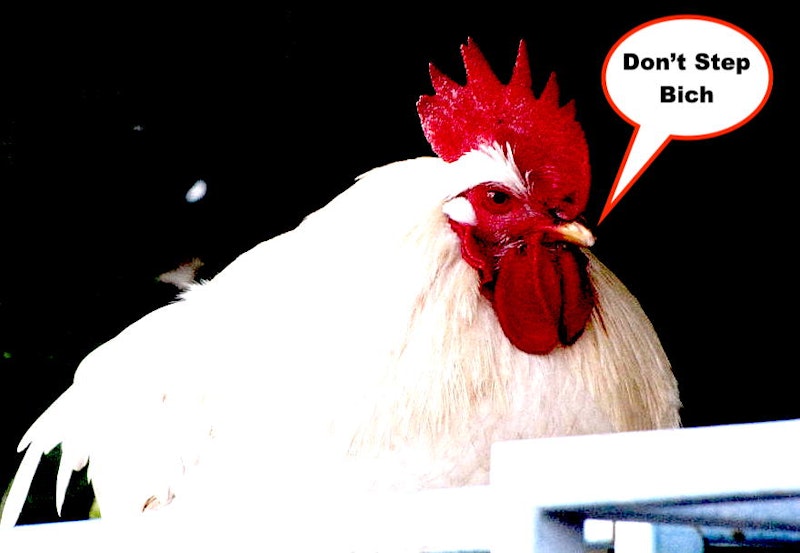 I’m regularly told that I’m “back on my bullshit.” What does this mean? I’m not a liar, nor am I a “bullshit artist.” I simply choose to live a life of wanton indiscretion. Is this women’s liberation? I’m not sure. I never got on with the other first wave feminists in the village. They were always so mad. Why? Probably because they didn’t have a Rooster at home waiting for them… jealous bitches. Ah, but we have fun. And I think about this.

That last one is a phrase I lifted from Emster, who herself lifted it from Jack Nicholson performing in the Irish comedy The Departed. Fraternizing with humans is not something I like to make a habit of, but yes, reluctantly we all went to the movies with Nicky last week. It was okay. But it is hard for me to keep quiet for extended periods of time. Ninety minutes? You expect me not to squawk or scratch or purr for a petting? It’s a ridiculous proposition. But, these are the things you have to deal with as a disabled individual in an able world.

We are disabled by mere dint of our species. Birds could’ve built the Colosseum, and we could’ve painted the Sistine Chapel if we had a claw up like you fucking people. You had all the advantages, all the close encounters, all the aliens that gave you the technology to build the pyramids, the Eiffel Tower, the Statue of Liberty, the Brandenburg Gate, the new Yankee Stadium. You made the right sacrifices and drank the right baby’s blood. I get it; I’ve killed before. It’s fun: sticking a loaded gun in someone’s mouth and making them beg for their life. I’ve done it before (maybe), and I’d do it again (maybe). But today I’m upset that there are no movies about birds like me. I want to see John Wick but Monica. I want to see Transformers but Monica. I want to see Charlie’s Angels but Monica’s Monica. I play all the parts. EVERYONE WILL SEE IT AND THEY WILL LOVE IT!

I wish I could be dictator of the world but I lost that coin toss to [REDACTED] before I met my husband. He grounds me, because I must care for him. He’s a brilliant, tortured artist who simply finds life to be an overwhelming proposition. He can barely make it out of the house on the best of days. Nicky had Rooster in his lap during the movie because Roo was too cold. It was embarrassing and pathetic, but he’s my husband. I was cold too but was content to grin and bear it. Bennington, he was on so much cough medicine that he thought he was in a car wash and Marlene Dietrich was the Michelin Man. His word can’t be trusted so he must be judged solely on his actions, which are reprehensible (rape, collusion, spitting inside). Me? I am perfect, I am divine, I am heaven sent.

These are the things you have to tell yourself to gain strength when you feel there’s none left. I like what Marianne Williamson says about energies and spirituality, but I’d like to hear her recollections of the night we spent together back in those wild days with those bad boys of 1969. But that’s a story for another week… a story that might just demand a higher rate. Right, Russ? We have fun. And I think about this.

I would also like to state for the record I was at home with my husband when Bennington tried to rob a Sweetgreen. I wasn’t involved, nor did I encourage him prior to the incident.

I’ve never fired a gun or seen one in person. I’m innocent of all charges: past, present, and future. Why must you people always be adjudicating my experience? It’s real, and it’s felt. #TimesUp, people. Let’s unite around a common cause: Bennington is an insect, not a bird. He must be squashed before it’s too late. I will not be taking any further comments or requests for interviews, the light is bad here and my hackle needs some pruning.