Monica cleanses herself of imperialist guilt a week before the serialization of Bennington’s novel begins. 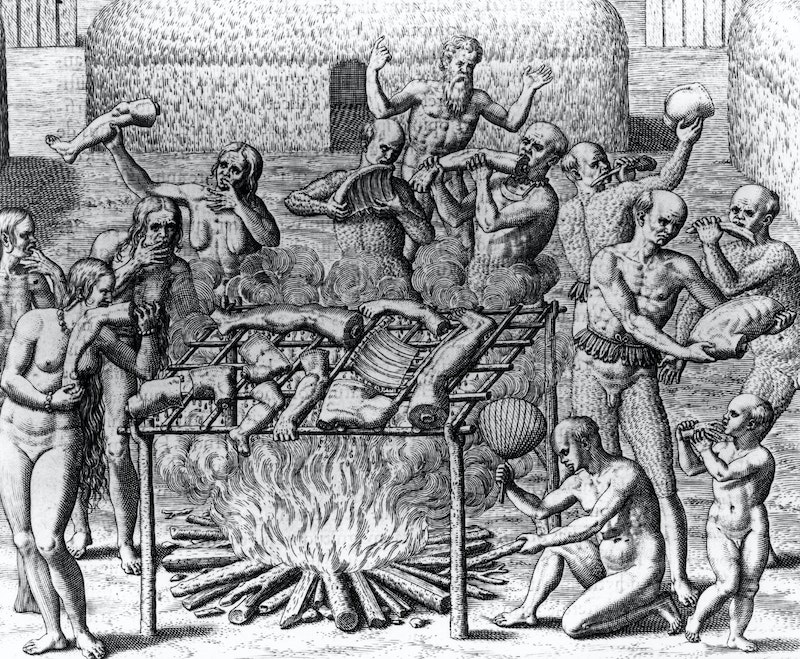 When asked for a caption, the author responded "Some of my early work." It is unclear whether she meant the engraving or the human cannibalism.

Sorry, but I want more money. I want more money. Did you hear me up there? I need more money. I said it three times. Maybe that’ll make it easier for you to understand. There are vultures over my house and I’m female, but that doesn’t make me dishonest or unpatriotic (contrary to what some right-winged birds claim—why listen to them anyway? They’re lame).

I’ve always paid my taxes (when I found them just), and I’ve always helped turtles and old women cross the street in blizzards, hurricanes, and tornados (in normal weather I’m otherwise occupied). I’m the handmaiden of my cousin and his wife’s legacy, and what do I ask in return? Love. But they can’t give that. They’re cold and ossified inside. They can no longer love. But that’s okay. They can give me money instead.

But they won’t. They won’t because they’re poor—in spirit. To wit: “Anthony Fauci won't be seeing his kids this Christmas, and he wants everyone to do the same.” I don’t care what Mr. Fauci wants or thinks—sorry, Doctor Fauci. Although I doubt he’d mind. Women can be so much sometimes, it makes me embarrassed to lay eggs. I have several degrees, but you don’t see me flashing my credentials like so many saggy, varicosed breasts.

Twitter is a buzz with bored and depressed professionals who hate their kids or hate the world for denying them kids, and so they take their anger out on others. I hate them. It’s my mission in life, as I, Monica Quibbits, a female hen of the rooster/chicken genus, to restore gender relations in the First World of humankind. Why I should help them is a mystery—these are the people, after all, who completely destabilized and destroyed the Global South and much of the developing world, all to rape their land and steal their resources. You really want cobalt and lithium and oil so bad? WHY DON’T YOU MAKE IT YOURSELF. THEY DON’T HAVE ENOUGH TO SHARE!

As you can imagine, I’ve recently read The Jakarta Method by Vincent Bevins. I was very disappointed to find out that I’m not named once despite being involved in at least half the campaigns mentioned. Nevertheless, I’m having a good day. I suppose it’s for the best that I remain in the shadows of history, unable to “answer” or “pay” for my “crimes.” Since when is it a crime to organize paramilitary groups and establish a junta in a poor country that wants to elect a government run by communists or socialists? I guess since the end of the Second World War.

I helped pave the way from Sukarno to Suharto in Indonesia, and I may have gotten my wings bloody in the chaos of Santiago 1973 (I’ll never break bread with anyone from Chile, too much blood), and I may have even had something to do with Jair Bolsonaro’s rise in the last half decade (but I won’t shake hands with anyone from that country either—too much Mad Cow Disease)—but I’ll never take up arms against those defending our country against marauders. When I’m at home, I’m an American, I’m not a stateless mercenary, and as an American I believe in nonviolence and isolation.

For example, what to do of wanton murder and suicide in our nation? I suggest a “hands off” approach, perhaps even some sort of land expansion that could give us some leg room to stretch out. Maybe Canada or Mexico has some acreage they can spare? Worth asking. I’d also like to propose a new meal plan for Americans: three grains of rice a day, and one bean. I do think it’s leaps and bounds ahead of other such proposals, but I defer to the economists. Regarding war, I believe it’s outdated: I think we should try “cancelling” our enemies and rendering them un-hireable in the entertainment industry.

Oh, you’re in ISIS? You’re from Russia? You’re French and you don’t have a Yellow Vest? Cancelled. It’s easy. Can you imagine how mad Mahmoud Ahmadinejad would be if we banned him from Twitter? Like, so mad oh my god. We have to try it. But we can’t ban Donald Trump, he’s too important, he’s given too much to the culture. I propose that we create his own Twitter site, with his own Twitter page, separate from the others and also separate from the sewer of alternatives that have popped up since the election. It’s better to have a genius working away in isolation where his advanced state of cognition cannot disrupt society at large. He will give us his gifts in time.

Before I leave you, permit a turn from geniuses to imbeciles: my “cousin-in-law” (if such a static and barbarous state truly does exist, then God help me, because I qualify) Bennington Quibbits will begin the 12-part serialization of his first novel. I don’t remember what’s it called or what it’s about. I guess you should look at it, or at least click the link so Russ and Nicky don’t send Tyson representatives again. Yes, yes, we’re paid a tiny stipend to promote our writing and Splice Today at large across the animal kingdom, although this rarely translates to page views or advertising dollars because most of our animal friends 1) don’t have computers, and 2) can’t read.

That’s okay, though. We read them your fairy tales, the one you tell yourselves to bear life unto death. Bennington’s little booky-wooky may be “published” online, but it’ll disappear like quicksand, like so many tears in the rain, like the minuscule amount of his blood that’s actually blood and not narcotic. It won’t be worth reading. But check it out, I guess, next week, on Christmas Day. Maybe if you hate your family like Bennington, you’ll like his little online book. I won’t be reading it—just let me know if there’s anything in there that gives me grounds to sue. I love making Bennington miserable so much it’s unreal.