Rooster recalls past roles and past lives with his beloved wife Monica. 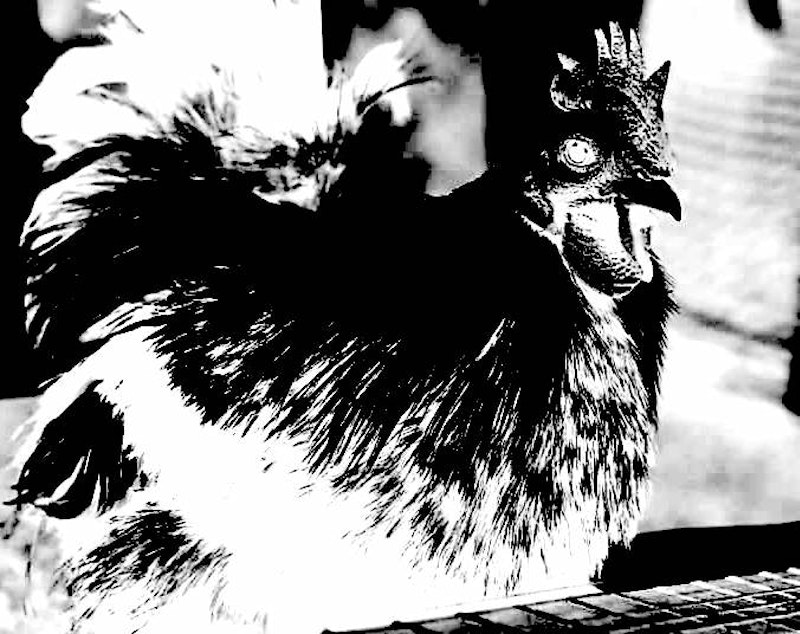 The author at his home, not working.

I’ve never met a Jolly Roger. Then again, I never sailed the high seas. Hi, good morning, Friday morning. I’m your host Rooster Quibbits here for a miniature revue of kaleidoscopic contour in the lives of your favorite neighborhood birds. We’re flightless so that we may remain relatable and calm in the eyes of mankind. In fact we are monsters: schemers, planners, evaders, deviants, miscreants, creatures up to no good. But we have fun. Do you have fun? I sort of doubt it.

There was the time that Monica bought cocaine from David Bowie’s dealer in 1978 in Manhattan. We enjoyed everything that Studio 54 had to offer, including each other. But oh so sordid the details, it’s not important—I’d like to share something Nile Rogers said to me that night. He spotted me on the balcony, did a double take, then turned and began to approach. I prayed he hadn’t read my first novel, The Doctor of No Health, or my disastrous attempt at a commissioned biography, Garfunkel: A Life (Almost), but before I could say anything, Rogers reached his hand down and gripped me by my hackle. My spur claws were caught in the grate of the balcony and I couldn’t escape in the very brief time he had me incapacitated.

“You look like a chicken fucking.” And then he dropped me and walked away. I’d no idea what he meant by that, still don’t, and honestly don’t want to know. But Monica looked at me different after that night. We’d been together only 700 years, yes, but even after that little time you can get sick of each other. I don’t think we had an argument for the rest of the 1980s—which is remarkable, considering I almost gave Bennington AIDS in 1987 (with a needle, get your mind out of the gutter).

Then there was the ecstasy 1990s. We didn’t last very long in the gabber scene, and I found it tiresome pretending to like Primal Scream all those months in Manchester. I always preferred Joy Division, The Smiths, The Cure: you know, that awful island’s depression music. Because the only way I can tolerate a British person is if they’re sad or suicidal (preferably both). Don’t think that their imperialism and colonialism only affected mankind—don’t be so naive. Birds hate the British, not least because the guards at Buckingham Palace wear those hats that make them look like storks. It’s confusing for us! We don’t appreciate it!

I was invited to the Queen’s residence once. I refused on principle, and after hiding out in a friend’s flat for four days under a rug in a closet, I was smuggled into Germany. I didn’t have time to see Berghain or Fassbinder’s grave before I had to jet back to the United States. Uncle Slippy helped me then, back when Monica tried to leave me for Smashing Pumpkins singer Billy Corgan, but luckily that didn’t last. Around the first week of April in 1994, a lot of stress and anxiety she seemed to be carrying around with her just disappeared.

You seem different, I said. “I don’t have to worry anymore. The deed is done.” The next morning, Kurt Cobain’s body was found in his home in Seattle. I haven’t asked Monica about this coincidence, and I haven’t listened to Cobain’s music since his death. Too painful—but perhaps I can be reassured in the notion that my wife relieved him of his earthly suffering, but who wants to leave this world when they have a wife and infant daughter? Not him… I didn’t get that sense, but then again, I never met him. I never got the chance.

No news in Massachusetts for now… people are happy that Joe Biden won. They’re secretly excited for Kamala Harris to become the president in February. And they’re not concerned with justice anymore. I suppose my wife can get back to her clandestine career as a mercenary if she wants. “My body, my choice,” she says. Well, okay, fine. But the next time she comes home with lamb vindaloo and garlic naan asking if we can have a “staycation,” I’m locking her ass out the house. I’m not sleeping with a desert ragamuffin. Maybe that’s mean, but maybe I’m just getting old. She can start a fire for herself out in the yard. It’s plenty warm at night now.