Working on movies teaches you to get real close with people for a short time who you never see again. 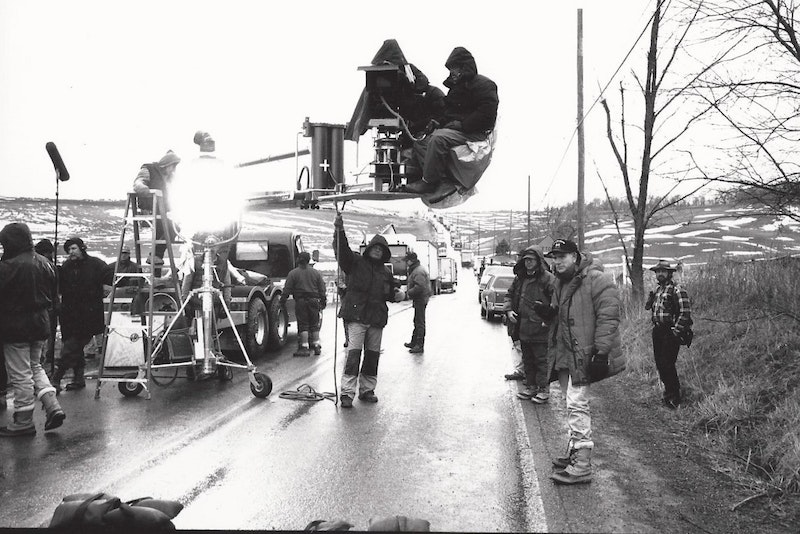 I spent my 20s working on film sets. I grew accustomed to the long hours, high stress, strange call times and constant traveling. Most film shoots last two-three months. You spend days and nights with the same ragged faces, everyone teetering from hangovers and lack of sleep. Film crews develop an intense intimacy. This leads to affairs, infighting, jealousies and petty squabbles. When a shoot finally ends, people go their separate ways.

Film production makes going back to “normal life” difficult. While society rises with the sun, film workers are hampered by a crippled circadian rhythm. It takes weeks of sleep to recover from the trauma of film production. This leads to problematic relationships. For a filmmaker, a typical romantic liaison lasts a few months, the same length of a film shoot.

“Working on movies teaches you to get real close with people for a short time who you never see again,” a cameraman once told me. “The only people who understand this are other filmmakers.” I asked if this meant I should stick to dating filmmakers. He laughed and said, “Good luck with that.”

I dated actresses, costume designers, production managers and script supervisors. A pattern developed. I experienced immediate intimacy, a belief I’d found a soul mate, a passionate few weeks bookended around a road trip, second thoughts, distaste, brutal screaming matches and then a quick breakup leading to an inevitable “What was I thinking?” crisis.

I came to a painful conclusion. Don’t date filmmakers. When a friend told me he was dating an editor, I advised, “Hope you don’t end up on the cutting room floor.” Based on my own painful encounters, here’s cautionary advice for dating filmmakers.

Actor/Actress: Don’t date an actor. This is the oldest adage in the book. They’re drama queens, narcissists, self-centered egotists who’ve mastered the art of faking emotion. They can be charming and entertaining, but their need for continual applause is exhausting. With an actor you’ll experience emotional highs like never before. You’ll also experience valleys of despair ending with broken glass and emergency room visits. Actors are financially unstable, emotionally fickle and always need to know your motivation.

Cinematographer/Camera Operator: Cinematographers are voyeuristic stalkers. They fixate on you and record your most private moments. They film you while you sleep, while you shower, while you make love. They have few social skills and are more comfortable with inanimate objects than with people. They’re arrogant, moody and think they know more than everyone else. They disorient you with bright lights and threaten to frame you out of shot to get their way.

Director: Directors are control freaks. They’ll take over your life, demand total supplication and reshape your personality to conform to their strangest fetish. Dating a director is like joining a cult. You’ll be instructed how to dress, eat, talk and behave. You’ll be forced to give up friends and family and to adopt the director’s world as your own. You can suggest ideas for the relationship but the director always has final say. You’ll be dumped the moment your Q rating takes a fall.

Editor: Editors work in the dark and can’t be trusted. They can shape your life into a tragedy, comedy, horror film or murder mystery. Editors are patient and relentless and with one carefully chosen snip, they can make you look like a buffoon. Editors like to watch. They’re secret megalomaniacs who yearn to control every frame of their world. They play with human emotion and relish the opportunity to cut people out of their universe. Because they work in the dark, editors are often pale and sickly. They’re anti-social introverts who prefer being alone.

Producer: In The Godfather, it’s the horse-owning producer, not the mafia, who’s portrayed as a villain. Producers are abusive, desperate and psychotic. They care about one thing: money. Their phone book is an FBI Most Wanted List. They cavort with drug dealers, warlords, gunrunners… anyone who’ll fund their films. They’re despots in charge of hiring, firing and controlling a film’s purse strings. If a movie hits it big, producers become rich. Most movies don’t hit it big, which means most producers are on the verge of bankruptcy. Not all producers are like Harvey Weinstein. But the Weinsteins of the world are usually producers.

Screenwriter: Screenwriters are moody, neurotic hypochondriacs who live in a state of paralytic indecision. They project their paranoid delusions on the world and see madmen and monsters everywhere. To date a screenwriter is to dive into a world of perpetual conflict. They offer witty dialogue but they’re trapped in a hideous internal monologue they can’t turn off. Screenwriters spend their days dreaming up new and creative ways to kill people. They think they know where they’re going but usually get lost about a half hour into their journey. They’ll betray your deepest secrets and refuse to acknowledge stealing your story.

Special Effects Supervisor: Special FX technicians love guns, bombs and ammunition. They’re the paid insurgents of the film world. Their job is to blow things up. The bigger, the better. With the advent of visual effects, Special FX jobs are in decline. This makes the FX people angry, which makes their pyrotechnics more dangerous. It’s never wise to upset a Special FX technician. They make Molotov Cocktails, military grade projectiles and IED’s. They’re ill-tempered, trigger-happy and would rather destroy something than try to fix it.

Stuntmen/Stuntwomen: Stunt performers are attracted to danger and addicted to painkillers. They’ll walk through a burning fire to save you but chances are they set the fire themselves. They’re accident-prone and rewarded for their suicidal tendencies. Their resumes include bar fights, car accidents, knife wounds and falls from buildings. They’re uninsurable and their idea of a good time is racing a motorcycle through rush hour traffic. Most stunt performers have lost at least one finger or toe and they’re always a stunt away from premature retirement or death. Their film careers usually end by age 40 at which point they become carjackers or getaway drivers for bank robbers.

Production Designers are nihilists who dream of apocalyptic landscapes. Sound Engineers are shadowy perverts who get off listening to private conversations. Special Effects Makeup Artists are closeted sadists who traffic in buckets of blood.

With an average production cost of $1200 per minute, film sets are uniquely stressful and toxic environments. Filmmaking attracts dysfunctional outcasts unable to fit elsewhere in society. The best advice for someone seeking to date a filmmaker is simple. Don’t do it.