My days at Larry Flynt Publications. 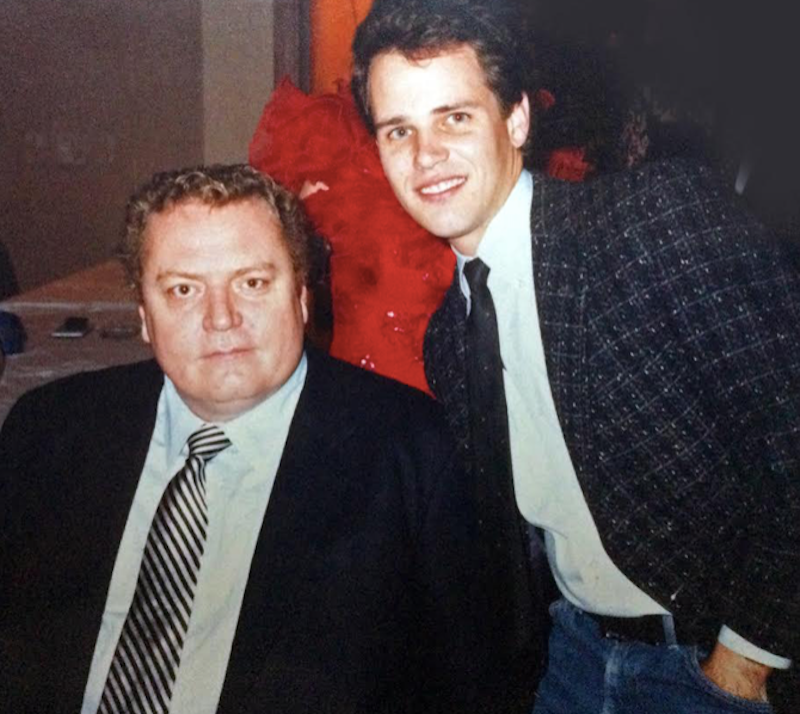 It was stop-and-go traffic heading west along Santa Monica Blvd. passing through Beverly Hills on a hot July morning. I was on my way to work as an assistant photo editor for the most notorious rude adult publication in the world. Seemed like business as usual, so far.

Then around noon, the Traci Lords scandal broke. Porn’s biggest star was underage. On the 38th floor of Century Plaza West an announcement was made over the intercom, “Attention all employees, do not release the following Hustler issues...”

Immediately, I was sent down to the “morgue,” the glittery tower’s scary subterranean storage archive. The dimly lit facility was filled with boxes full of t-shirts, coffee mugs and other junk surrounded by file cabinets. In typical East Coast fashion, all I could think about was if there was an earthquake, I’m doomed, no one will find me down here.

I’d always been attracted to outsiders—the misfits, outcasts, artists and offbeat lunatics who maintain an existence on the fringe edges of society. These are the true renegades. If one of those pariah maverick men or women broke into the mainstream and helped corrupt the status quo, that was great. Larry Flynt was one such person.

The world’s said its final farewell to Flynt. His rags-to-riches story can now be tucked away on library shelves across America. Captain Pink’s gold-plated wheelchair will probably end up in the Smithsonian.

When I worked at LFP, I flew under the radar and only dealt with Larry on a few occasions. He’d roll into the photo department, perch himself over a light table and look through a magnifying loop. “She’s good” Larry said while selecting models from slides for next month’s issue. Larry liked to be hands-on in the editing process.

I held a polite smile and listened as his distinct Kentucky drawl ebbed and flowed in a detached manner. To me, he seemed friendly and happy. Of course, that was on the surface. It’s well known that good health wasn’t Larry’s calling card. His life was filled with pain and drugs. Not a day went by without a court case in progress. But he was able to make millions of dollars along the way.

There was tragedy, too. I worked there when his wife, Althea, died at age 33. Years later, his daughter Lisa, a wonderful person who also worked in the office, was killed in an auto accident. Beneath all the bluster, filth and turmoil, there was a man in a wheelchair wrapped in an American flag diaper.

During the mid-1980s, LFP was headquartered in Century City next to Beverly Hills. The area was once home to 20th Century Fox’s studio backlot. After making Cleopatra in 1963, 20th Century Fox hit a cash crunch. What resulted is what’s commonly known as one the worst deals in Hollywood history: 20th Century Fox sold the 260-acre property for an unbelievable $50 million. It’s worth billions today.

The real estate development became Century City, and home of Century Plaza Towers. The tall buildings have a triangular footprint. In the tower’s middle were an elevator entrance, a reception area and the bathrooms.

Employees would often buzz each other over the intercom when someone interesting was at the reception desk applying for a modeling job. “Oh, my gawd, Gentile, get out front now! See if you can figure out what this is waiting in the lobby.”

For the record, almost every entertainment lawyer in LA had an office in the towers. Not a day went by without a celebrity sighting: Sean Penn, Dennis Hopper, Timothy Leary, Whoopi Goldberg and handsome Burt Lancaster stepping into an elevator.

For many, there wasn’t much until Hustler came along, only the underwear section of the Montgomery Ward catalog and National Geographic. Pornography, smut, X-rated material, whatever you want to call it, was strictly an under the mattress recreational pursuit. Our job at Hustler was to help provide adult men with Roman hands and Russian fingers a fantasy vehicle with hardcore pictorials.

A reasonable question to address, viewed through the Hustler lens, one might say, is that the models appear vulnerable, encouraging exploitation to sell sexuality at any cost. From my viewpoint that wasn’t always the case. Everything I ever saw or worked on at Hustler was completely within legal boundaries. Granted, some scuzzy, sleazeball perverts worked there too, but that’s the case anywhere.

Senior Hustler photographer James Baes, the person who claimed he gave Larry the idea to go hardcore and show pink once told me, “You know, Michael, once you show the pussy, the mystery is over.” Let’s pause and reflect on that.

Hustler’s lens men often shot the models on beach locations in Florida or Cabo San Lucas under natural light. Mirrors used during the “Golden Hour” gave the photos that special Hustler look. To give you a sense of what it was like, the highlight of each month was producing the Hustler centerfold, a three-page nude image that’s folded, placed and stapled in what’s known as “the gutter,” the middle of the magazine. During Hustler edit sessions, I’d assist by moving an empty cardboard page template around a blank white wall in a darkened room with no windows. The photo department head stood behind a slide projector. Baes would call out directions, “To the left, a little more to the right, that’s it, good, stay there Michael, don’t put the pussy in the gutter.” You never want it there.

The materials were sent to a vendor in a secret European location to make color negatives. They retouched the images: tan lines, breast enlargement scars, various skin conditions and an occasional pesky fly trying to get a piece of the action while lounging on a sandy beach butt. The gynecological content was always specified for a perfect shade of pink. My duties included circulating proofs of the magazine from various departments for approval before going to press. It was a quick walk around the building’s thick carpeted hallways carrying armfuls of production boards, eventually making my way to the final stop, the art department. I’d pass Larry’s office along the way.

When Larry’s long velvet office curtains were drawn shut, a “Code Pink” was issued. That meant Larry’s in. One day the curtains were closed with a slight crack left between them. This set the stage. I peeked in. On his desk, female legs were wrapped around his head while Larry was busy having lunch, lapping up clam.

I flew into the art department announcing, “Hurry up, go take a look if you want to see where our promised raises are going.” One by one, they did. The look on everyone’s faces upon returning was, to say the least, priceless.

The art department had big glass windows overlooking Los Angeles. Several pairs of binoculars floated around, so that on break you could check out nearby window activity in the Century Plaza Hotel, and there was plenty to check out.

President Reagan would occasionally fly into LA by helicopter and land on a rooftop directly across the Plaza. Before his arrival, Secret Service agents would line themselves across the roof. Once a few us pressed our faces against the department windows and flipped the agents the bird. The agents responded by flipping us back.

“Hustler was not the vilest magazine on the market, but we tried,” wrote former Editorial Director, Allan MacDonell, in his scathing 2006 memoir Prisoner of X’s, an eye-opening read on his years working at Hustler.

MacDonell’s a great guy, he brought in top name talent. Surprising to some, the LFP Art Department consisted mostly of women; Dot, Lauri, Karen, Susan, and many others. The “Flyntstones” I worked with all had a great sense of humor. You needed it to work there. Meanwhile, we’d crank out the smut, helping feather the Flynt nest.

In December of 1987, Russ Smith asked me to come to New York to help start New York Press. I did. Today, you can go online to see and hear just about everything to satisfy one's needs. No one buys dirty magazines anymore, they've disappeared. Guess it makes sense — different strokes. Now you can order a robot for that kind of activity.