Why does it always end up in my cloaca? 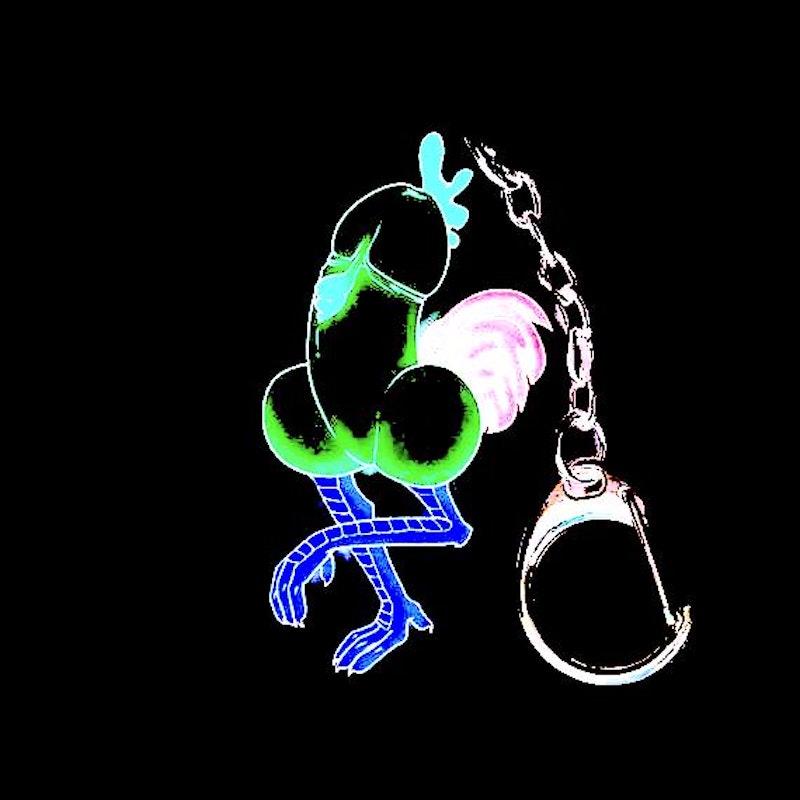 Keychain designed by the author. -MQ

Why do I always get the dirty end of the dildo? Last article from “the chickens” as our birdphobic editors call us before the American presidential election in four days. Rooster and Monica (bitch) are out on the trail, stumping for “Joe and Kamala” as they call them, speaking in bushes and small dumpsters in every town in every state in the country. Just kidding, my cousin and his wife would never do anything for anyone but themselves. I don’t doubt they’d accept an offer from the Biden campaign, but the fact is that all of us Quibbitses have been locked out of American politics since our debacle in 2016. No one wants to hear about the Quibbitses and their foibles any more than they want to hear about John Boehner crying about being deported or Rooster hallucinating in a waterlogged torture chamber somewhere off the coast of Cuba.

These are boring days. There’s nothing to report from the Quibbits family cabin in rural Massachusetts. Rooster and Monica have left town, but they didn’t go campaigning, they didn’t go to help anyone, they didn’t go to feed the ducks that are growing extra bills because of the chemical spill down by the river. They went on “vacation.” They’re calling it a “staycation” simply because they’re staying within Massachusetts state limits. I’m calling big-ole-honky-tonky-white-chicken-trash-malarkey-BULLSHIT on that one. Rooster and Monica wanted to take ecstasy and fuck in an industrial complex far away from nature and any other living lifeforms that they haven’t already invited, arranged, or bought.

My cousin and his disgusting wife are up to some wild Eyes Wide Shut shit right now. I don’t know if they’re having sex but they’re definitely putting on masks, and not the kind you see every day now. They’re also wearing robes—black robes. They said Amy Coney Island might be there. I was puzzled—isn’t she busy? She was just confirmed as a Supreme Court Justice. “You’re such an idiot, Bennington. A child. You still have no concept of power or the value of the dollar bill.” Well no, Monica, I don’t, because no one ever told me the value of a dollar. In fact, everyone that ever admonished me never made any effort to teach me, or even to suggest vaguely where to learn about such a value. Does it grow from trees? Fall from the sky? I don’t think so. Like most knowledge, financial acumen comes from books. I learned to read on my own. I can handle life.

Rooster and Monica can’t. They’re dysfunctional birds, pure and simple: they’re the swamp. On a weekend—Halloween, no less!—when most of America is tense as ever waiting for the results of an election we’re already being told will be delayed, perhaps indefinitely, Rooster and Monica will be enjoying their pleasures of the flesh aided by chemical intoxicants and “sexy toys” that they made or procured from perverse establishments on strip malls next to the very restaurants that serve the meat and bone of our brethren. I wonder if Monica can feel the secondhand grease of murder on the dildo when it slides into her cloaca.

I’m purging the darkness. I don’t have to imagine my cousin’s sex life, I’ve been living with them for the past seven months. They keep me up at night. Monica is not a good wife to Rooster. I don’t think she’s a good person and honestly I think she’s dangerous, too. She has a shotgun she hasn’t told Rooster about. She woke me up once in my bed and put a knife to my throat. Neither of us said anything, she just established her dominance over me and stared me in the eyes unblinking for what felt like an eternity but ended up being only 40 minutes. I didn’t see her the next day. Rooster looked haggard, and I assumed he had gone through one of his occasional “flights of fury” and beat Monica and threw her down the stairs and into the basement. He has moments like that. He scares me.

But don’t pity poor little Benny. Ole little Benny, sober as the morning dew, stuck in the barn contemplating burning the whole thing down. Maybe I can make a statement, maybe my meaningless life can end with something substantial. No—destruction begets destruction and I must end the cycle of abuse. I think I’ll send a stern text message to Rooster in the hopes of his ruining his high and thus his evening. If I had Monica’s number, I’d send her a picture of my shit sprayed inside of her dresser. I want to ruin all of her things like she ruined me, I want to destroy her objects like she destroyed the only object I have—my heart. I can only take so much.