BQ, with the help of snakes and bees, takes over a slaughterhouse and muses about equality. 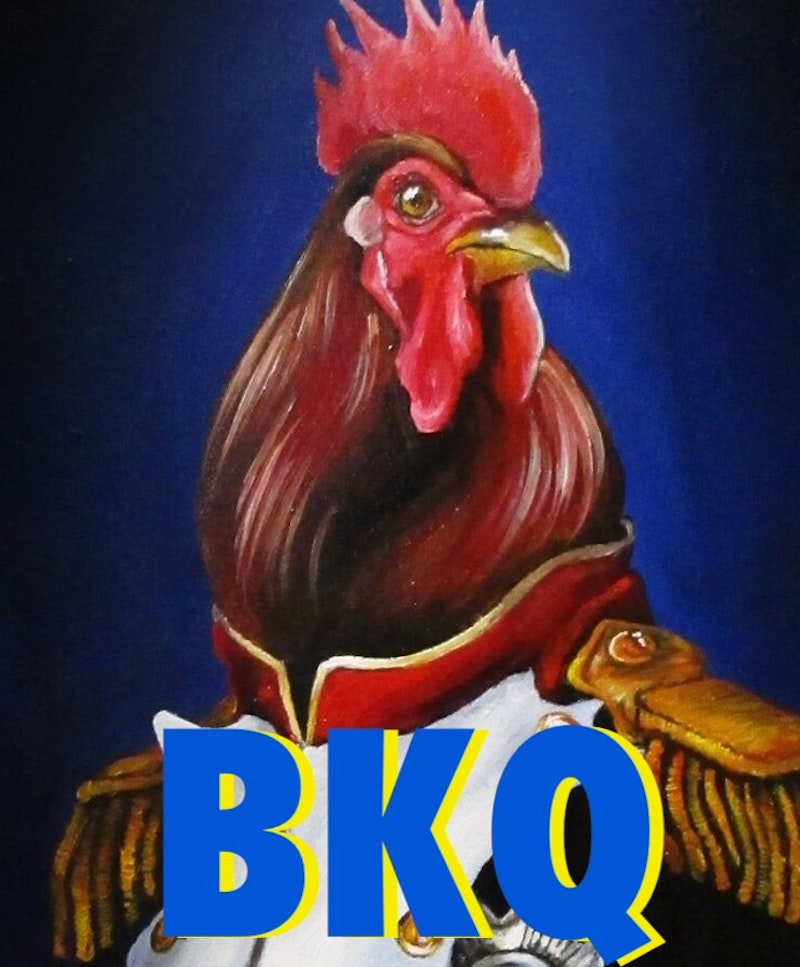 Monuments may be coming down, but I wouldn’t get too excited. Nothing will change… no. I’ve been around long enough to know many cycles of violence—and a few years of peace—and chaotic times like these are always followed by austerity, or worse, authoritarianism. My proof? Evidence? Not my job to get that for you, sweetie. Try again. Do better.

I’d be out protesting supporting the cause if I weren’t already wanted by “the law” (global law). You must understand if I put myself out there, I’m sacrificing myself already. I’ll be nugget mash before I reach intake. Protests aren’t for me, but there are always things you can do to help if you support the protesters and mistrust the police. Links to those resources? Once again, not my job. It’s not my job, as a chicken, as a bird, as a rooster, to educate you, an ignorant human. You’re less than me because I have wings, and I can fly. I simply choose not to.

Heck, I’ll admit it: I participated in the Boston riots. Why not? I went to check out the Tea Party when that was going on. First of all, people don’t understand the context of that event. Those men were animals. They were fat, foul, and fearless, and we owe our freedom to them. But we also owe them our laziness, our blind confidence, our tendency toward arrogance. The Founding Fathers were bros, or in today’s parlance, “Chads.” Trust me, I knew them: every one of the men that participated in the Boston Tea Party had at least one rape under their belt, and plenty of slaves. Not good!

May we look further back into history for examples in dealing with our national unrest today? I don’t think so—frankly, we look too often into the past for escape. There’s no escape from today, we must face it head on: do we want to equip the police in this country with military gear? Do we want a police force? Do we even need prisons? Questions that hitherto would’ve been absurd to ask are now very real, along with much overdue reparations for black Americans.

I’ll share one story from my radical days, the mid-1960s. I don’t mean radical in terms of politics, I mean radical in terms of my mental state. When the West finally caught up with us (nature) on the whole “psychotropic” trip, the animal kingdom just kind of went off. All of us were fucked up beyond belief from the moment The Beatles landed in New York to when Nixon resigned a decade later. I remember things—plenty, believe me—but its foothold in fact, in accuracy, I must mention that this is in doubt for me.

Regardless, my story: a sit-in. Marshfield, MA. Meat processing. Myself, along with a phalanx of bees and snakes, invaded the slaughterhouse. This wasn’t reported because some things are simply too strange to be news. But it did happen, and it was new. I entered as their leader, a tinpot dictator among legions of stingers and biters. The people didn’t stand a chance: all workers were sent home with double their pay, and all hogs were freed (we’re not liable for the condition of said hogs after their unconditional release).

Things were going fine—we were negotiating with the police, getting a local news story together, even some traction on social media—and then Soho was looted. Apparently the Rolex store is more important than cross-species labor solidarity in the time of coronavirus. Did everyone forget about transmission and the risk of getting sick and dying during the last week? I didn’t, but I still went and invaded the pork plant and killed—I mean, spiritually liberated its human “owners.”

“You too, Bennington?” Henry looked at me in despair, caught totally off guard by my betrayal.

“There’s no love lost between oppressor and oppressed.” With that, I put a piece of metal between his eyes (his sunglasses fell off when I spur-clawed him), and went about my day.

Now I’m back home. Why? Well, frankly, the snakes and the bees got bored. We tried something very difficult and accomplished it. Now what? No one has any idea what the utopia they fought so hard for actually looks like. What is paradise? What is justice? What is happiness? Happiness isn’t always fun. That’s why I left that day, and reinstated all of the employees and freed my army. Why? I simply didn’t believe in anything anymore, at least nothing that brought me to that place, that high high place of authority. Sometimes it’s better just to go home, to know when you’re better off serving something with agency than leading for its own sake.

So I gave up my Napoleon stance. Pigs are going to die, and they always look down on us as lesser animals of an inferior intelligence. Even when we were liberating them, the pigs looked at the insects and me with sideways eyes. I flashed on the Russians liberating Nazi concentration camps, and it hit me: one of these pigs was going to kill me. Maybe not that day, but eventually. So I left. Now I support the revolution with my wallet, from home, like every fully paid up member of the American race. Yep, I said it!!