Let’s get down to strategy, life advice: max out your credit cards and cry for Herman Cain. 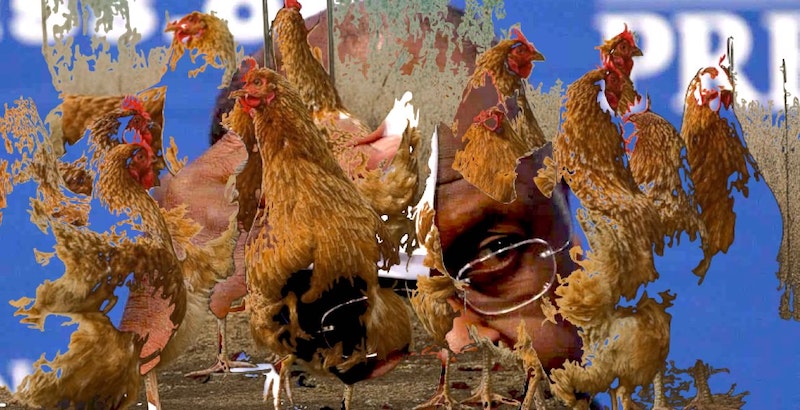 Having been open about my vitamin use I feel it’s high time I drop news of future sponsorships. No company wants to stand up for me despite the fact that I’m living proof that HGH (hen growth hormone) not only beefs up the body but also beefs up the mind. I don’t mean to suggest that HGH will make you think or look like a cow, because that would be obscene. It makes you solid and whole and basically immortal. I bought a million in stock last quarter just because I could. How? It’s called credit, honey. C-R-E-D-I-T.

A hen can’t get HGH at the local farmer’s market so natural bunkers are what we rely on. Oliver Bateman’s workout routines look impressive, sure, but have you ever seen a chicken ace a math test? Have you ever seen a rooster write a masterpiece? Have you ever seen a bird get the Nobel Prize in physics? No, you haven’t—because you haven’t been looking. If I ever wanted to start a podcast—which I wouldn’t, it’s an activity for virgins and sociopaths—it would certainly be more popular than Alyssa Milano’s.

“We live in a world WHERE JOE ROGAN’s PODCAST HAS TRIPLE THE LISTENERS AS MINE!! Dear god.” Bitch who are you? Were you on a show or something? Didn’t you play Arnold Schwarzenegger’s daughter in Commando? That was in 1985. You sat behind Christine Blasey Ford and Brett Kavanaugh at the latter’s confirmation hearings in the fall of 2018. Why? Because you couldn’t get work. I know because I broke into your agent’s office. Your talent agency doesn’t like your antics. They think you should either go “full McGowan” and assault someone, or you should just calm down and learn how to write romance novels and appear in a hot young director’s first film in 30 years.

I don’t miss Vanessa Redgrave and her anti-Semitism. It just hits different when the British do it. Her acceptance speech for Julia at the Oscars in 1978 is a classic example all Americans can point to when asked why we’re proud to live in this country. Redgrave is uptight, hateful, and bigoted—but she’s no fun. “Zionist hoodlums” is just not the same as “Hymietown.” There’s no love in “Zionist hoodlums.” Jesse Jackson’s “Hymietown” was a term of endearment. He loved New York, he still loves New York (I’m assuming—we haven’t spoken since he refused to endorse my husband in the Western Mass comptroller race in 2000.)

I’m saddened to hear of Herman Cain’s death. Rooster and I loved his Grandfather Pizza, and we enjoyed his novelty campaign for president in 2012. Some will say he was “serious,” but we knew the man. He was a big ole teddy bear. He really just liked politics and pageantry. I don’t mean to suggest he was a frivolous man—it’s not in my nature to speak ill of the dead—I simply mean that Cain had a genuine enthusiasm for all that makes up “politics” in a way that many others don’t. Some politicians loathe the Iowa State Fair, they loathe shaking hands, and they loathe having to have “beer summits” and “hot dog meetings.”

Not Herman. Before he was a politician, he even gave my husband some advice: “Don’t run.” They were in the back of one of his Grandfather Pizza restaurants. “It’s really a pain in the ass, from what I’ve heard.” He ate another bite of deep dish. “You’d be better off setting up an LLC in Omaha and running everything through there, I mean that’s what most people in your position…” Funny, my husband always ends the story right there. What goes on with LLCs in Omaha? Oh well, no matter. Herman Cain’s death is just another reminder for us to stay inside and keep healthy. We also mourn the death of the first dog to test positive for COVID-19, but we didn’t know him. Or her, if it was a girl dog. We don’t get along with dogs. A pandemic is not going to change that.

A mild week, honestly… my namesake was back in the news for a hot second, but no longer… Bill Clinton dissing John Lewis?… Yeah, well, I’ve heard him say much worse in private… One last thing: Trump won’t delay the election. He’s just going through the five stages of grief right now. I’ll admit I’ve no idea which stage he’s enacting, but it’s one of them. Worry not. I’ve been assured that should he refuse to accept a loss, he’ll be forced to “by other means.” I guess money really can buy anything!