Who are Rooster, Monica, and Bennington Quibbits? 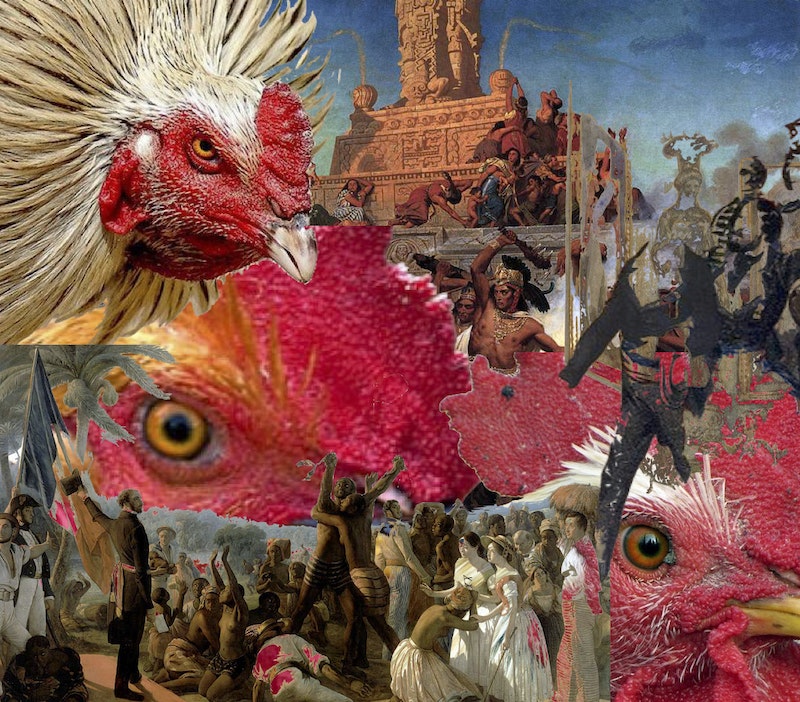 Sigmund Freud’s theories have been out of fashion for some time, but his dismissal in favor of pop psychologists du jour and Carl Jung, who no one seems to have read properly either, is rather silly. Freud introduced basic psychoanalytic concepts that can be mapped onto a wide variety of beings, not just people. I’m often asked, “Who is Rooster Quibbits?” Or “Who is Monica Quibbits?” Less often, “Who is Bennington Quibbits?” (Sorry, Ben). But most of all, people ask me why I talk to chickens and if there’s anything they can do to help me. They claim I’m having a “mental health crisis” when I talk to my three avian friends, and here’s the question: is society ready to reckon not only with their profligate consumption and abuse of animals, but are they even ready to acknowledge the humanity of birds? I doubt it.

People are thick and have a hard time of understanding who and what exactly the Quibbitses are. They’re not fictional, nor are they “magical.” They’re simply people, an extended family as dysfunctional and dependent on each other as most in this most diverse country of ours. But back to Freud: I think the best way to describe the birds to unfamiliar readers using the Austrian’s framing. I hope my butchering of the professor’s terminology isn’t too egregious—if it is, one of the birds will sic his ghost on me, and I won’t sleep without grinding jaw into dust.

Rooster is the ego, the eponymous representative of the species as is. He’s a model citizen, or at least that’s how he was groomed. He couldn’t bear being the Sidney Poitier of the avian community for years and years, and so he strayed. He started writing novels and taking drugs, enjoying the counterculture for what it was: a decade-long party where some marginally interesting art got made. He tried and failed to get rich off of charlatans in communes, and settled in New England near the end of the 1970s (although, as always, Rooster has travelled the world at a moment’s notice, as duty calls).

Rooster’s the driving force of the family and the only actively creative one. According to him, the others have absconded their responsibilities to the community and the world and are denying more literature and material produced by sentient birds able to communicate. Despite his commitment to the cause, Rooster continually encounters difficulties in his process. His novel, Always a Stone, has reportedly been “in progress” or “near publication” (depending on the day) since 2016. All three family members have confirmed the existence of the manuscript, but I’ve never seen a complete draft—only segments. And what I’ve read is brilliant. “You will never know the scope of my genius,” he once told me, “because most of the writing I’ve done was written in dead languages no longer known to man. But to the bird? The earth and all above…”

Monica is the superego, “striving for perfection,” the check on the primal and unintelligent id (discussed later). Rooster and Monica met sometime in the early Anno-Domini, near Jerusalem. In some circles (Finnish herring and Liverpool gulls), they’re regarded in a similar manner as Jesus and Mary Magdalene (some details changed). Bringing about the new age of alternating war and enlightenment and famine, Rooster and Monica became the shadow leaders of the shadow governments that so strongly sway our nation states. Their influence was supreme, as the Earth was still largely inhabited by cultures who respected its soil. Coming from the Earth and never succumbing to the Great Satan of technology as homo sapiens did, the Quibbitses’ never believed that technological progress necessarily created a better world.

Yet they were powerless to stop it. 1848 was a crucial year in the life of Monica Quibbits: prior to the bourgeois revolutions that swept Europe that year, Monica had a tight hold on her psychic sway of the planet. While dark pools of Hell existed and always would, they were isolated and less numerous than the various utopian oases and societies that Monica encouraged and allowed to develop for much of the pre-Industrial and pre-Marxist world. People were born into poverty and terror: Oliver Twist toiled under Monica’s watch. But so did Coleridge and Maupassant. I realize that the two writers I mention in her favor were drug addicts—with Maupassant, I’m assuming (“the amount of wine the French drink should be illegal,” said Monica when asked for clarification).

Point being: Monica encouraged pioneers and revolutions in the hope of bettering the world to a point where perhaps one day she wouldn’t have to care so much and work to hard to keep everything balanced. Not even her husband Rooster knew how much influence she had over world events: women of the world, take over. After 1848, Monica’s influence ebbed away. She was losing her grip on the planet, losing her grip on the story of the world… even the animals couldn’t forecast man’s submission to machines, an artificial intelligence developed long ago with the very first steam engine, through to the cinema, the television, and the air conditioning unit… these machines changed fundamental aspects of life so profoundly that they make life previously known untenable. Who would live in Houston or Tucson without air conditioning? Who would keep in touch with their third grade science class partner without social media? Monica saw none of this coming.

“If you want a quote for your story, your ‘primer’ on my family, I’ll give you a quick little log-line for the end, because I know you have a problem wrapping things up for us: I thought the world would move toward a more communal way of living. The utopian societies I was observing were largely communistic and socialistic, although isolated and very different in key aspects. People were happier than ever, more productive for a time than the Mayans, even. (I had no sway over Central and South America—Bastard Bennington robbed me of a hemisphere in 1864). Since the bourgeois revolutions of 1848, I’ve had to adjust to a nuclear family model. I am the mother supreme, the housewife, the homemaker, the woman who keeps the genius fed. As you know, this is all just a performance I am putting on for you.

“But remember that I must keep this performance going all the time, even for myself, because if the dance were to stop, I’m not even sure I would continue to exist. Such is the life of the world’s super-ego, striving for perfection, always at odds with the…”

That’s what five minutes in the mind of Bennington sounds like. It’s not a fun place. He’s allowed me into his “mind palace” only once before, and I almost had an aneurysm. Don’t ask to walk a mile in Bennington’s shoes, but to spend five minutes in his head, and you’ll understand everything and why he does what he does. “You see? I operate on nothing but instinct. Every word, every sentence I form and utter, is borne of fire and struggle as I fight against my ceaselessly screaming mind.” And so Bennington lives without thinking, acting on his immediate desires to silence the voices within. “I don’t even like what I do, but I have to keep moving, like a shark, or else I will die—there’s no way anyone can live inside of my head for longer than a week before eating a gun.”

Bennington is Rooster’s cousin, although their origin is still unknown to me (when asked if they emerged with the dinosaurs or with man, Bennington instead asked me to pass the Dijon, of which there was none. We were smoking hash. He apologized). They were running partners for a time, Bennington tells me (Monica denies this), explaining that they were the only friends they had. Bennington believes that his time with RQ kickstarted much of the progress that ironically lead to the 1848 revolutions and ended their reign of influence—but he doesn’t care. “We carried human beings up through the agrarian economy. That’s a major accomplishment.” He finished with his duck confit and lit another Gitane.

I must admit that when I’m with the Quibbitses I lose some essential aspects of consciousness: object permanence, linear time, language, gravity, the list goes on… Being with them is rather like being inside of a single, large birdbrain constantly at war with itself. I’ve never told them this, but I look at the Quibbitses for inspiration and for a model on human interaction and the development of societies and how individuals can shape history by being the right place at the right time and prepared… something the Quibbitses have rarely been since 1848. They don’t tell me much of substance about their lives when they truly had power, but one can assume that much of antiquity as we know it was shaped by the Quibbitses and other “Q” birds (no, this is not a conspiracy theory—I speak of Queztsacoatal, or however the fuck you spell that thing’s name).

The Bible? Written by Rooster? “Immaculate” conception? Mid-wifed by Monica. Mai Lai, Dresden, Hiroshima, Nagasaki, 100500 Cielo Dr.? Bennington’s work… I must remind my readers not to be too hard on Ben. He has had a very rough four months. Everyone is blaming the coronavirus pandemic on him, and he honestly didn’t do it. None of us know actually, and it’s been the only thing we’ve discussed at the Quibbits farm since March. Maybe they’re doing it for show for my sake, but they really seem to have lost their grip of influence on world events, and it’s making them wither away before my eyes. I feed them their adrena-chome and inconspicuously make my way back to Baltimore via [REDACTED].

They’re doing fine: they’re “immortal,” they say. I’m glad to have them as friends. But make no mistake: these birds are live wires. I wouldn’t recommend a visit to anyone who would like to keep their life expectancy past the age of 40. Spending any significant amount of time with any of the Quibbitses will take at least 15 years off your life, but it’s worth it. “Think about this, Nicky,” Rooster told me at one of our first meetings, in 1997. “There is nothing more lonely than being a God among men.”

“What about your wife?”

Family values, as you can see, are eternal.