An erotically themed visit to Walgreen’s is more shameful than anyone with a sex life deserves. 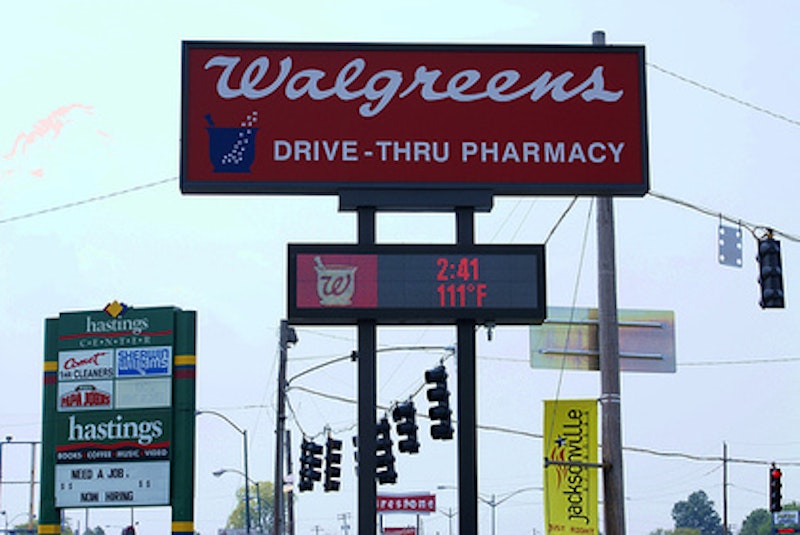 My boyfriend and I are making out and it’s starting to get hot and heavy. I mean we’re like really going at it. He reaches for a condom but then...uh-oh.

“We’re out of lube,” he announces reluctantly.

I don’t know if you know this, but the “I’m About to Have Hot Sex” section at Walgreen’s is actually more evangelically called “Family Planning.” Awkward. This, I believe, is their strategy straight out of the Sarah Palin playbook to discourage premarital sex. I’m not sure if I should be picking out lube or a boarding school for what is apparently my planned but still unborn child.

KY? Wet? Astroglide? Hmm. We make a selection and head towards the cashier to pay. Except that there are 100 billion people waiting on line versus a single cashier who seems to enjoy taking her time rolling people’s purchases across that scanner. Because I am unbelievably impatient, I brilliantly opt for the Cosmetics cashier, which always has fewer people waiting.

Uh-oh number two. The line is shorter, as I expected, but the cashier is my favorite old black lady with super big hair and even bigger glasses. She’s like my BFF every time I go to Walgreen’s. I always go to her line to buy, like, chapstick or whatever and she gives me discounts. But if I buy lube from her it’s going be like I’m saying: “Hi old black lady! Not only am I about to have gay sex immediately, but here this is the boy that’s going to do it.”

But I tell you the worst part of the whole debacle is that the old black lady reminds me of my grandmother. So now I really can’t buy the ass gel from her. “Oh my God we cannot buy the lube from her.” I say to Daniel’s laughter. Me: “I mean...maybe we can even it out if we throw in something domestic like, um, fabric softener.”

Am I completely alone here when I say that buying lube/condoms/vaginal creme/adult diapers/anti-fungal spray/foot odor power, etc. can be embarrassing? Like what if you’re a hot guy who’s super duper endowed and need to buy, I don’t know, Ultra Magnum condoms AND jock itch creme? Do you really want folks to know that?

It’s like: “Hi, I have a huge cock, and right now it really itches.”

I mean, it’s not like I’ve never had to buy lube before. You gotta keep your goodie drawer stocked like you do your refrigerator. Imagine going for that much desired bowl of Apple Jacks and—uh-oh—no milk!

But what sucks ultra hard is that I don’t think there are any goodie marts within walking distance of Yale. So I typically rely on those little shops that dot 8th Ave. or Christopher St. in New York. Much more anonymity. Besides, at least there they know what you want before you walk through the door. No shame in yo’ game.

What was so embarrassing to me about Walgreensgate was not just the grandma presence, but that I felt a Sarah Palin judgment placed on my sex life via the title “Family Planning.” This is obvi not the place for gay men and dykons. Clearly, it’s where Biff and Buffy go when—and only when—they realize they’re ready to start a family.

Parents should talk to their teens openly about sex. Talk to them about gay sex and straight sex since you might not know—and they might not either—if they are a homo or heterosexualist.     No more of this “Family Planning/Abstinence/Forced Babies” malarkey. No matter what Sarah Palin says, people are going to have sex, and there is no sense in making them feel guilty about it. You know, by forcing a young girl keep an unscheduled baby. Educating folks about sex is way better than punishing them for being curious.

I would love to see the day when I could confidently buy lube from the old black ladies or whomever, and instead of being chastised or judged, they simply looked me in the eye and said, in a deep, raspy voice...

Or at least the day when Walgreen’s invests in a self-check out.