I didn’t participate in the sexual revolution to the extent I might have. 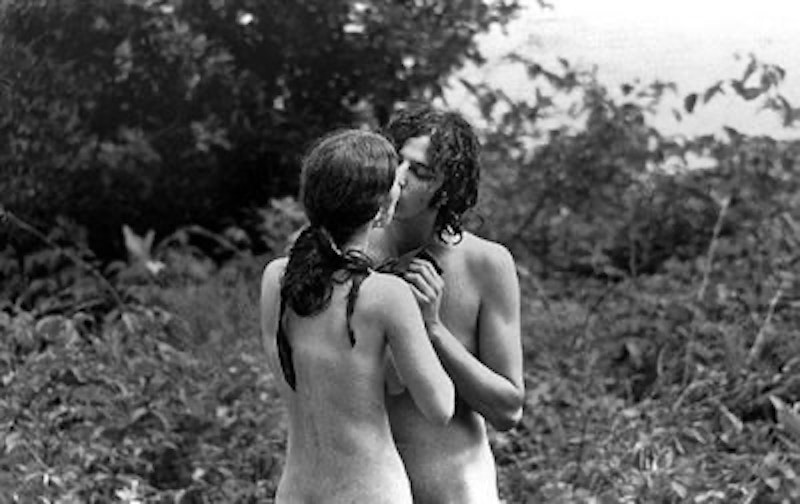 When I was a student at Washington College in Chestertown, MD, one afternoon in 1973 I went to visit a female friend in her dorm room. Knocking on the door, I heard a brief "Should we or shouldn't we" whispering between she and a boyfriend, followed by a "Come on in, but I hope you don't mind what you see." Walking in, I saw my two friends Susie and Richard fucking, on the floor, no blankets. Admittedly, I think he’d already finished. They were at the mutual squeezing stage. He looked a tad embarrassed, but Susie not at all. She simply said, "We're just horny people." I saw dozens of naked, beautiful young women in Chestertown, MD in my early 20s, but this may be the closest I came to witnessing actual coitus.

My attitude towards nudity in those days was to act as if it was totally normal and make the usual small talk. On a few rare occasions, I passed up some genuine come-ons. But on this day mine was a purely social visit. Richard put on his clothes and departed (we were all dear friends), and Susie and I hung out for at least another half hour. But other than a skimpy t-shirt that hid nothing from the waist down, she never put on her clothes. At one point, one of her somewhat younger roommates arrived, and the look of shock on her face was palpable, although I swear Susie never noticed it. I suspect Susie's friend thought that she had walked in on Susie fucking me, not quite understanding the mores of the hippie counterculture, which were as Susie and I sat there, already vanishing in the presence of these younger freshmen, never to return again.

During this time, sexual promiscuity was rampant, and not just among the younger generation. Married couples often had "threesomes" to "spice up" their marriage. I saw a fortysomething professional artist, with whom I performed in the Chestertown theater group (he played the Indian in One Flew Over the Cuckoo's Nest) having an open affair with a twentysomething woman right in front of his wife. To say I began to accept this behavior as normal and even desirable is an understatement. I’d decided at 13 that my mother and stepfather would’ve been happier single, and that the institution of marriage had to be destroyed. The sexual revolution only confirmed beliefs that I’d had for years. I believed in it before it even started.

One of the only regrets of my life is that I didn’t participate in the sexual revolution nearly to the extent I might have. I was brought up by a gay stepfather, and he and my mother never had sex after I was born. I lost my virginity at 19. But after we broke up, I got picky, and it killed me. My tastes ran towards hot-blooded, artistic, sexually active women between the ages of 18 and 23, and they ate me alive. Not that I was totally blameless. I was immature and did many stupid things. But I didn’t have sex for six years, while seemingly everyone else did. I had countless emotionally close relationships with women, many of whom would unburden their hearts to me at three in the morning.

The effects of these years linger to this day. I still tend to prefer bawdy, uninhibited women to more sexually modest ones, as charming as they often are. But all my life I’ve had a great love for all women. Indeed I’ve often felt like an "honorary feminist." For decades I’ve been in the presence of women, divulging secrets about their personal sexual lives, some bordering on the graphic, as if I wasn’t even in the room. I view that as an honor, and wonder if I’m unique in this way from most men. Certainly the presence of my wife, who had countless close female friends, may have given me a pass. But this happened even before I met Dyane. Perhaps women find me non-threatening because of my obvious feminine side.

My late wife Dyane Fancey told me she’d had about 50 lovers before she met me. We both agreed that we would have an open relationship. Dyane even encouraged me to go out with other women for a brief time, and once said, "Monogamy is unnatural." I frequently urged her to have affairs with other men, and occasionally women. And she had no shortage of come-ons, even when she was in her 50s. But other than a few rare "touchy, feeling" threesomes, mostly at my urging, she never went all the way with another man after I moved in with her.

Once in 1984, I stumbled into an orgy at the home of some friends in Northern Virginia. My wife and I were sitting in the living room, when a female friend appeared, wrapped in a towel, saying, "There's great energy in the blue room." It was two women and a black Republican (one of the ladies made a comment about "slavery is heavy") and a shy girl who tried to drop her pants, but decided to leave after I said, "Only if you're comfortable." (She phoned me a few weeks later, but nothing came of it.) I found one woman especially attractive, and we had a brief association. I remember thinking, "This is right. This is natural. This is the way all people should be."

But in spite of our "open marriage," Dyane and I did not count on the fact that "We're just horny people." Having affairs was simply unnecessary. Why bother? From the day I moved in with her in late summer 1981, Dyane and I would have sex twice a day, every day, for 25 years. No exaggeration. And that was just our average. One day in 1990 we actually had sex 19 times in a single day. In the last eight years, we slowed down to once a day, with an occasional one- or two-day hiatus becoming more common as Dyane's health problems started to interfere. But shortly before she died, Dyane said, "I want to keep having sex with you even if it kills me." I don't think anything in our lives meant more to us. Quite simply, she and I did not have the time to have sex with anyone else, because we were so happy with each other. Dyane cured me of every vestige of shyness that I ever had with women, and for that alone I will be eternally grateful. What an incredible woman! How lucky I was to find her! And sex was only one part of what made our relationship incredible, although a very important part.

If anyone finds my comments about my late wife inappropriate, Dyane was always publically candid about her sex life. (Just read her poetry.) To her it was recalled fondly and joyously, both past and present. I swore once she died that I would be as brave and foolish as she was in making these personal stories public. (Those who attended her memorial last summer heard me speaking of them that day.) It’s an important way for me to honor her memory, and all she continues to mean to me. I strive to be the courageous person that she was, as I know she would have wanted.

Many people my age seem to be in denial that the sexual revolution ever happened. I look upon a world in which sex is still considered a private matter. For those who wish it to be so, that’s your privilege. But I think about my mother and stepfather, who lived their whole lives sexually repressed. I watch the fabulous Showtime series Masters of Sex, which shows both the pros and the cons of the sexual revolution. And I can only say this: nothing is good that is hidden. To whatever degree we choose to do it, every aspect of our lives needs to be displayed in public if we wish to achieve total mental and physical health. And all religious and social mores that have repressed us for centuries must be cast aside. They’ve done way too much damage for way too long.

Writing about my memories of the sexual revolution, I sometimes feel like Candide, the innocent wandering clueless through outrageous events, none of his own instigation. And innocence is a key word here, as well as humor. How sweet and innocent to hang out with my naked friend at college! It gives me a warm feeling now to recall it.

Ultimately we hippies were all just middle class American kids, with enough security to "act out" without repercussions. (Bear in mind, however, that I paid my own way through college, and other than one year living with my parents after graduation, supported myself from age 18 on.) I experienced a lot of angst in my 20s, and wouldn’t be young again, even if I could. Yet I look back fondly on those free and innocent days, and can only hope that today's younger generation is currently experiencing something similar. The sexual revolution of the 60s and 70s may have ended in the early-80s, but the world did change because of what my generation did. And I say for the better!