Squishable boobs, but no squishable dicks. 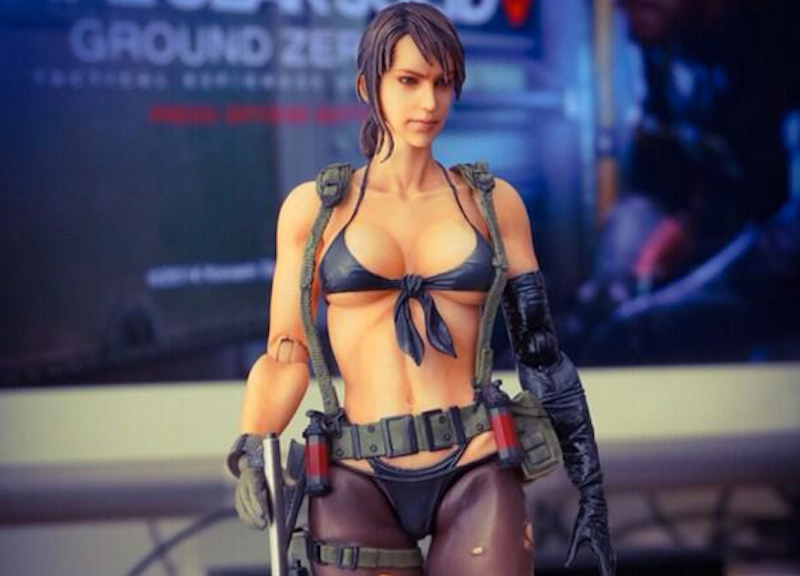 I’m slowly beginning to collect an impressive amount of video game memorabilia. I have a replica of an Alliance Cruiser from Mass Effect placed very carefully next to a bobble head of my favorite character from the series, who guards a never opened collectible figure of Garrus Vakarian that now runs for almost $200 on Ebay. I think video game action figures are great works of art, especially when you can appreciate the craftsmanship that went along with making them. I’ve yet to buy a female action figure, but when I browse the Internet for figurines of my favorite heroines I certainly don’t think, “Man, this action figure is great! Too bad it doesn’t have squish-able boobs.”

But the creators at Play Arts Kai have fixed the lack of realistic breasts on female action figures by adding some much needed bounce to them. Hideo Kojima announced on his twitter an action figure for Quiet, a character from the Metal Gear Solid franchise. One of the sneak peak photos of the action figure involve two fingers pressing against Quiet’s boobs, pressing them up into her neck. The boobs mold under pressure and respond to touch, as opposed to groping two plastic spheres that don’t supply any jiggle at all. Kojima also tweeted a photo of an action figure of Raiden, a male character from the Metal Gear Solid series. He comes with alternate pieces just as Quiet does, but he’s fully clothed and his junk is hard and plastic (no pun intended) and doesn’t have a squish factor.

News of the Quiet figurine popped up on my twitter a few hours ago and most of the stories I’ve read don’t go into much depth. To be fair, it’s still new. I’m no stranger to erotic looking figurines, but I’ve never seen one that responded to touch. It’s really disturbing and quite frankly, it’s creepy as hell and makes me feel super uncomfortable. I’ve bought my fair share of sexy figurines, especially when I was in Japan. The store that I remember walking into had walls of figures; they were all from popular manga and anime. I equate it to a PG-13 Barbie aisle. Although not realistically proportioned in the slightest, the females were cartoonish in appearance. Even though the female figurines didn’t represent actual women with their cartoonish eyes, bright neon hair, and unrealistic waists, I still felt like a pervert whenever I touched one.

The Quiet action figure is so much worse than the figures that I’ve bought, and that’s really saying something. It’s really obvious the Quiet figure was made specifically for male gamers and I guarantee you that there will be someone out there who is going to misuse Quiet’s squishy boobs. Action figures are supposed to be displayed with pride, to be admired as a beautiful work of art. The fact that there is a company that thought it would be a good idea to add a completely pointless feature to Quiet’s figure is disrespectful to her fans and to gamers in general. Why are the realistic boobs necessary? I can’t express how angry this makes me as a woman who appreciates action figure counterparts to video game characters. Unless you’re trying to market a blow up doll or a love pillow, I want squishy boobs off my action figures.