The Day My Dad Told Me He Was Gay

We were at a Chinese buffet. 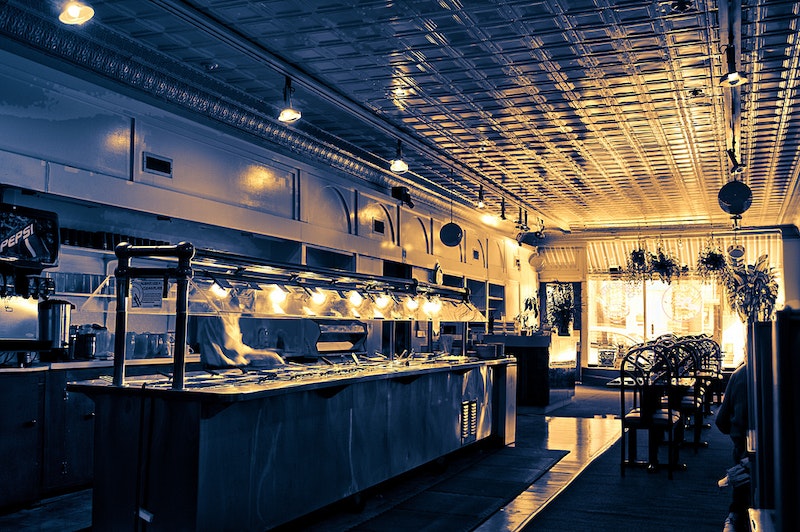 There are a few things to expect when you go to an all-you-can-eat buffet: salt, a lousy pizza, and shame. That shame is mostly from grabbing the last dumpling from an old woman across the sneeze-guard. There’s more shame: whether it’s assaulting an elderly woman with tongs or keeping a secret from your family. It weighs and starts to break you. It splinters your soul and compromises you. I can’t imagine that feeling, that burden. Recently, we saw Olympic icon Bruce Jenner confirm and go in-depth in a two-hour interview about her transition. I couldn’t picture being one of her children. Well, that’s not exactly true, because I’ve had a parent shed a skin of shame right in front of my eyes. Not in front of the bright lights of TV but under the low hum of the halogen lights of a Chinese buffet.

I was on the verge of my senior year of high school when I got the invite from my dad to join him for lunch near his office. It started with me showing off my new car and my new license, a celebration, a rite of passage. I picked him up, brimming with pride, and my whip, a rad 1998 Escort, had the sport package on it, so it was the definition of cool.

The drive to the restaurant was about three minutes; there was no heaviness in the air, nothing abnormal. It wasn’t until my dad asked the waitress guarding the door for a private seat. This was strange; I knew it, the waitress knew it, and my dad, well, he had bigger things on his mind.

There’s nothing more awkward than being seated at a buffet, because you don’t actually sit down, you just observe, take a mental note of where it is, and run for the plates. There was the small chit-chat between bites of overcooked dumplings and questionable meat on a stick. Knowing the oddity of the request, our waitress was attentive to the point that it felt like she was eating with us. As I picked up my second eggroll, my father dropped his fork and looked me in the eyes. His voice broke as he spoke.

“Paul, I want to talk to you about something.”

With a full mouth… “Yeah, aren’t we talking?”

“I’ve been wanting to tell you something.”

So there I was holding my eggroll, watching my father in the most vulnerable state I’ve ever seen.

“No, thank you.” My father dismissed the waitress.

“I‘ve wanted to tell you something for so long.”

“Tell me what? Are you telling me you’re gay?” I must’ve been a little loud or the restaurant was empty because the waitress began circulating.

“Yes, Paul. I am telling you I am a homosexual American.”

I chuckled as the waitress quickly ran back to the servers’ station giddy to share the news. I dropped my eggroll and started playing with the food left on my plate. We sat there for a little bit longer; I asked him questions and made nervous jokes.

I don’t remember much of the meal, or the rest of that day. As a 17-year-old getting ready to explore the world, I was torn on how to react. Did my dad being gay make me gay? Was I a product of a lie? Countless questions with few answers.

About 10 years later I’ve gotten the answers to many of those questions, while still some are taboo and may never be resolved. But I know I’m far from alone. As social pressures ease, as information and access to resources and supporters is a Google search away, and as, honestly, their parents die, more and more men and women like my father have become free to love and be the way they wish.

That day in the Chinese buffet added more to my plate and heart than kung-pao chicken and cholesterol. It gave me perspective that wasn’t in the form of a fortune cookie.