I'm Not Sure Marriage Is for Me 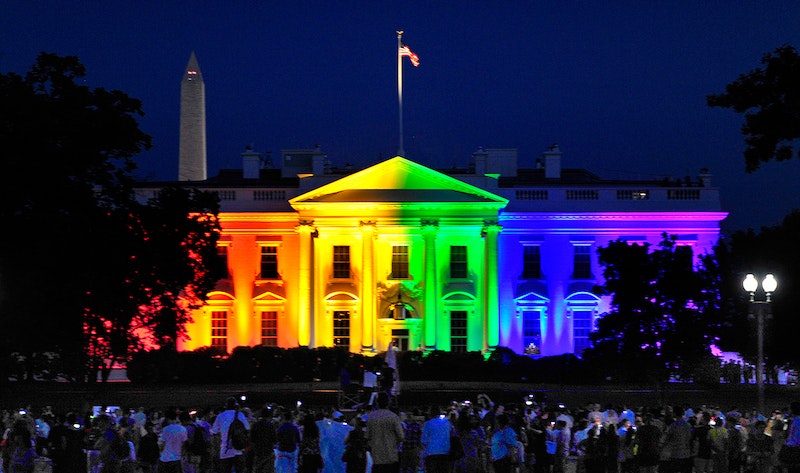 “WOW.” I was in the bus heading to a coffee shop when my friend Thomas sent me that cryptic Facebook message. There was a party he suggested I go to and messaged me earlier in the day to find out if I went. I told him I did and that the party was good so I thought that’s what this unsolicited “wow” was all about.

“Gay marriage” is all he said next. I forgot that the Supreme Court's gay marriage decision would be announced any day now, realizing that’s what he meant. I immediately got on The New York Times website but there was no news. I went on CNN, too, but there was still no news. I kept refreshing the page and suddenly there the CNN ticker was: "Gay Marriage Legal in All 50 States."

I’ve spent my whole life going to straight weddings, seeing pictures of straight weddings on Facebook and watching people change their status from single and in a relationship to engaged. Talk about stressful! No matter how many long-term boyfriends I’ve had—so far just two for about five years each—I never thought marriage was in the picture for me. I always knew I was relationship-oriented and hoped I could have a partner, someone to share all my crazy ideas and go through life with, but I never thought of it as “marriage.”

So when the Supreme Court finally made gay marriage legal across the United States on Friday I was shocked. This is the same country where gun violence leads to terrorist massacres in schools and movie theaters, where black bodies are largely unsafe from the police, where the Confederate flag still flies and where just recently a terrorist killed nine black people praying in a church.

But now the gays can get married.

On Friday my Facebook feed was of two minds. Some of my gay friends were elated about the 5-4 decision. These are people who have all kinds of relationships: one of my friends has been with his partner for 10 years. They’re in an open relationship and he has a college-bound kid from a previous marriage. Another is an academic who recently celebrated a 10-year anniversary with his partner. Some even got married months ago in a state where gay marriage was already legal but now have the freedom to have their marriage recognized everywhere.

And then there was the other thread. A number of gay friends of both sexes and different relationship combinations immediately began criticizing marriage as “not the answer,” rightly striking back at an institution built primarily on the notion of property and patriarchy. They pointed out that there is much more work to do relating to HIV/AIDS, queer homelessness, queer suicides, police brutality, prison abolition and trans violence.

The irony is that today you can get married in Texas or Virginia or Ohio or Georgia and show up to work tomorrow and be fired because you’re gay or transgender. You can get gay married in Indiana but you can’t have pizza at your wedding from this place. I sat back and watched both threads come in, one celebratory and the other important and nuanced. Where did I fit into the mix? The truth is I’ve spent most of my life in a place where gay marriage was possible. New York and Connecticut. So if I wanted, I could’ve already been married in Connecticut in 2008 or in New York in 2011.

Legalizing same sex marriage was absolutely the right thing to do. But I don’t know if marriage is for me. I’m not opposed to it, but I don’t think I need to buy into such an old institution. If I had a wedding it’d be fucking fabulous, because hello, and I might be convinced to do it just for the party. But I don’t believe marriage is necessary to prove your love or commitment to someone you care about. If you care about them, if you’re building a life together, then they already know where they stand with or without the legal jargon.

The major issue is this idea of “ownership.” You give someone a ring and then they are “yours” forever. If you fuck it up then they get to take half your shit. I want to be in love but don’t want to own anybody. I love you doesn’t mean I own you, and I don’t want to control someone through legal contracts or jewelry. I don’t need my love to be on a piece of paper. But I know that with marriage come a million other financial, property, family, adoption, health and immigration-based benefits. And frankly, I think more people get married for this stuff than for the other stuff.

Most opponents of gay marriage rejected it on religious grounds. Fine. But what if marriage as we know it eventually became something only religious people did, people who felt the need have their union acknowledged through religion? What if the rest of us, wanting the benefits only, embraced civil partnerships or something else?