A Conversation About Dick Size

I had it with this awful backpacker. 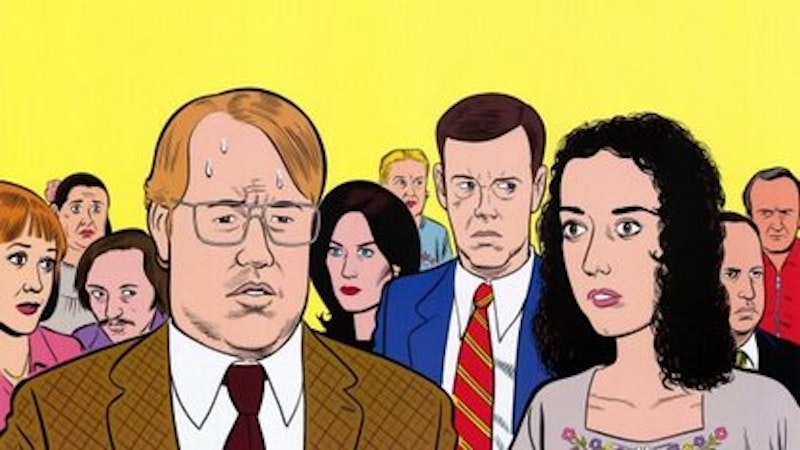 Years ago I had a conversation about dick size and didn't know it. Years passed before I clued myself in. I'm that out of phase. There are things I don't clue into.

The conversation was in Latin America. I'd fallen in with another backpacker, a subtly overbearing type who functioned as BMOC for left-wing gringos in Guatemala's second-biggest city. I forget the city's name. Tuxla? You can check it on a map.

I found the boy gradually unbearable. “Of course, I despise Steven Spielberg,” he would say and a minute later, as an afterthought, add that he did like Saving Private Ryan. He took the contradiction in stride. As long as he could deliver his applause line, he figured the conversation was basically on course. This tendency of his affected me like bad weather; it lowered.

By the side of a highway, about 1:30 p.m., we sat with the sun very much present and no traffic anywhere. We set out hitching on a day where everybody stayed home, whether because it was national holiday or because it was Saturday, I forget which. The Trotsky Beard hasn't thought of this staying-at-home problem. I lay the mistake to him because he has taken charge. He's a hiking guide in Tuxla and an alpha male, and I am just barely me.

The Trotsky Beard and I are talking about Happiness, a movie. It has been out for a year or so and it did good business for an indie. I'd seen it and the movie made an impression on me. I'd been seriously down when I saw it. Now, sitting by the highway, I say the movie strikes me as a cartoon of the depressed person's view of the world, of how things looks when you're down. Trotsky picks this idea up and puts it aside. It doesn't compute for him. Instead he presents a new topic, a head-nodder. BMOCs do that.

Here's what he picks, what he's got lined up. It's a scene where the movie's lead, a therapist, gives his son a talk about dick size and how it doesn't really matter. A kindly, man-to-man exchange in which he deals with frank sexual matters and defuses a young boy's fears and self-doubt.

What the lead has to say is nothing new. It's the kind of thing one hears from Dr. Ruth Westheimer and Dr. Drew and other TV doctors who get down with the people on matters of sexuality. But my companion, voice brightening after my downer topic, says this: “One thing that made the movie worthwhile. It's good to hear sexuality talked about in a mature, adult way. When Dylan Baker talks with his son,” etc. Dylan Baker being the actor who plays the therapist.

“Well, no,” I begin. “I mean, that's a sort of parody of the—” But how to explain? The scene in question is actually one of two. Later in the film, the therapist sits down with the son for another talk, one in which he has to explain that the police want him for rape because he's a pedophile and he tried to drug his son's friend and fuck him during a sleepover. The man begins, stops. He starts again, he has a sentence going; and then he breaks down. He was really going to go for it, to lay out in frank, healing fashion the facts about how sometimes some grown-ups have to...

The two scenes amount to a trashing of the therapeutic ethos. First we see the ethos played out in text book form, everything as it should be. Then we see it covered in shit, and the second version is the one that counts. After all, this is where the character has wound up. All that healing frankness didn't do him much good, since he's a pervert-rapist whose son is staring at him as he cries.

So I might say all that, except it will take me years to think of it. “Uh huh,” I say, and I wonder how anyone could be so in love with banality. My companion loves hearing a cliché stated just because it's a cliché. That's all the sense I can make of him.

Years later I think matters through. Frank talk between father and son wasn't the thing being held up by my companion for approval. What he had in mind was the specific content of the talk. That being the reassurance about penis size—there was Trotsky's head-nodder.

Our conversation about a movie scene involving penis size was not really about the scene. The conversation was really about penis size. I am the only person who wouldn't get that. Only I would need seven or eight years to get in tune here. I guess I care about ideas more than most people do; maybe not in a productive way, but I'm fixated. And there's point of view. Men with small or normal-size dicks no doubt like hearing that they can relax, they can stop fretting. This would be a pressing issue; I can see how they would care. But it just didn't occur to me.

I have no idea what happened to Trotsky Beard. I Google his name and college every now and then. Nothing. To tell the truth, I don't wish him anything good at all. But he did get laid a lot; he said so and I believe him. “Most sex is mediocre,” he said, and I guess it was.