The Problem With Sexual Orientation Labels

There are lots of people having all sorts of secret sex you don’t know about. 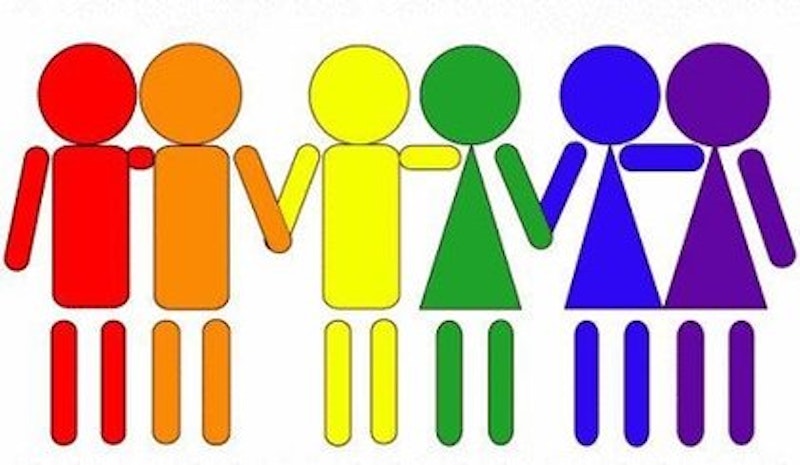 I had a crush on this guy in my high school named Corey, and sometimes I’d have little study sessions where I’d invite him and a few other people over, but in all honesty I was just trying to get him in my room. I needed a ”no homo” pretext to get him alone, and didn’t care if any of the other people showed up. At the time I knew I was gay, not as in a Rainbow Toting Gay, but I knew that I liked dick and was extremely attracted to guys. I had no reason to think Corey was gay like me, but that didn’t mean I couldn’t lust after him, you know?

There were so many times I thought Corey and I were going to get it in. I flirted with him and he very clearly flirted back, or at least that’s the way I remember it. But even after all the flirtation it went nowhere. He was straight; I was gay.

When straight people develop crushes on other people it’s often pretty easy to act on them or make your crush known. When you’re gay, especially a young gay person, you sometimes feel like you need to keep those urges to yourself. Or just between you and your BFFs. The thing is though, gay people lust after folks they are attracted to and whether those people happen to identify as gay or straight is immaterial. There are a lot gay people out there who have had at least one sexual encounter with a person who identified as straight at the time of the boning, I guarantee it.

On Wednesday, I read Noah Berlatsky’s fine Splice Today article on new research suggesting that sexuality may be a choice after all, and the first thing that came to my mind was that it doesn’t matter what sexual orientation you identify yourself with or where you see yourself on the spectrum of sexuality. That’s because Sexuality, with a capital “S,” is more about having a label than it is about whom you are fucking or, in some cases, who you are willing to fuck under the right circumstances.

Really? Can’t he just be a guy who likes to suck a dick every few months or who otherwise likes sex with men here and there, but who ultimately sees himself marrying a woman or falling in love with a woman? Or is that just a bisexual?

There are lots of people having all sorts of secret sex you don’t know about. Your co-worker? Oh she kinky. Your boss? Yeah, he likes to pee on people. Sex is happening inside, outside, and between the boundaries of “sexual orientation.” Sex that’s not talked about even with close friends, sex that only happens once you’ve had a certain amount of coke and alcohol and when the music is pretty good and you’re feeling kind of good right now. How does a temporary or even situational sexuality fit into all of this?

Sexual attraction is always about chemistry. That much we know. But chemistry doesn’t depend on what sexual orientation label you give yourself or identify with the most. I’ve written previously about how I’m a gay man who loves cocks but who finds specific types of girls really attractive, and I’m sure I’m not alone in this, either.

We get so wrapped up in labels that we forget about chemistry. Can’t you be a straight-identified person who enjoys gay sex every once in a while? Can’t you be a gay-identified person who might enjoy straight sex, too? My point is that it can’t always be so cut and dry because when we are we don’t allow ourselves to explore possibilities and to take things as they come.  If I was really attracted to a girl and she was really attracted to me and if the chemistry was there, why shouldn’t we have a sexual experience? What is stopping us?

As a gay man I automatically inherit a set of communities. I get my own bars, clubs marketed at me, and a cultural and political history. I get a special genre on Netflix and I get RuPaul! What I don’t get is the opportunity for me to define myself for myself and away from this community that I’ve inherited. That’s why for me, sexual orientation is more about having a convenient label and an identity than it is about whom you fuck.