Is There Such a Thing as Objectifying Men? 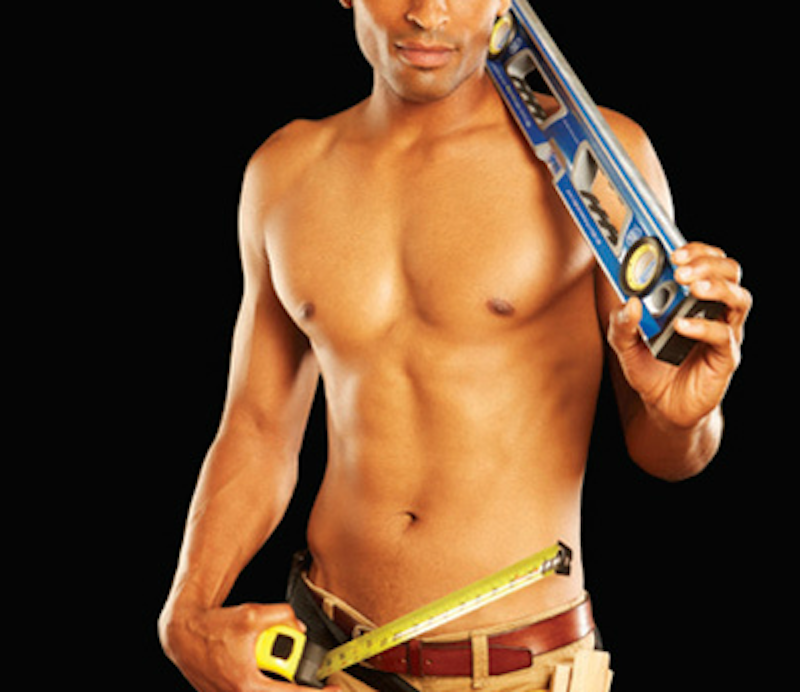 The book arrived as I was taking a break from working on my novel outline to eat a cheesesteak: ding-dong, UPS left it at the door. Great lunch reading, I thought. I started flipping the glossy color pages to an assortment of fabulous-looking, mostly naked men “fixing up” a house—each chapter is a different room: “Hands On in the…” bathroom, kitchen, den, bedroom, etc.

The book, in addition to emphasizing that one must “match the tool size to the job” offers additional sexual euphemisms like:

"You just can't know how sexy he really is until you've seen him performing with a cordless drill."

“An hour break will give your handyman the energy he needs for all that afternoon pounding and banging.”

“A well-charged battery keeps you safe from calling an old boyfriend in an emergency."

And perhaps most blatantly: “This caulk isn't the only thing that's loaded with creamy white filling."

Sexy men in glossy pictures beside projects with names like “Well-Hung” have quote captions like “Just hold it steady and I'll nail it in." You get the idea. Mainly because you’re being hit over the head with it by a shirtless hot guy.

If the tables were turned on this book, and it was about women serving men (dinner, laundry, sex), the feminist establishment would go positively apeshit. Objectification of women! Degradation! Sexism! The book would never make it to a Barnes & Noble. But these books don’t seem to be met with any outrage.

Is that what women (and you did not just call us “the fairer sex,” did you?) “really want?” Perhaps I’m non-traditional, but I’d honestly rather have hot R photos of hunky men doing far sexier shit than asking for directions.

We know sexism against women is still alive and very much kicking. Does anyone ever even talk about sexism against men? In his piece “When Men Experience Sexism,” my colleague Noah Berlatsky writes that “men suffer because of the same gender role stereotypes that hurt and restrict women—though men, being of a different gender, fall afoul of those stereotypes in different ways.”

“What if these sorts of photos were the norm? What if we stopped perpetuating the myth in advertising and art that men are more visual? What if women's appetites for sex were catered to just as much as men's? What if this was a common spread you saw in women's magazines growing up? How would that have changed your feelings about your own lust, your own sexual appetite, your own attraction?”