Why They Suck: Bruce Nauman and the Art of Lameness

I don't hate conceptual art, but it had better be smart. 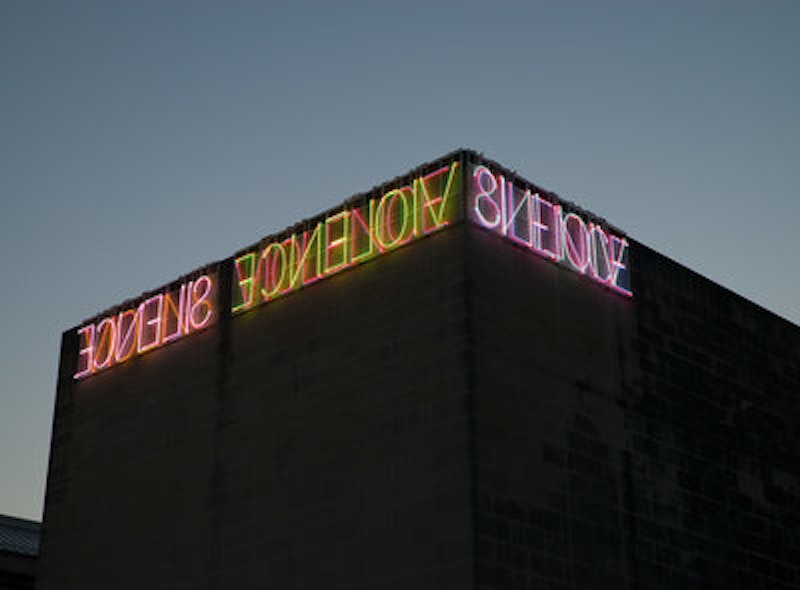 For years, I lived near the Baltimore Museum of Art, over which loomed a large neon sign that flashed "VIOLENCE, VIOLINS, SILENCE." It was a “conceptual” yet all-too actual work by the celebrated Bruce Nauman. Was it deep? Was it clever? Was it funny? Not even a little, but perhaps it got more hilarious in later years as the homicide rate in Baltimore climbed. A version of the work sold for $4 million at auction in 2009.

I don't hate conceptual art, but it had better be smart. I don't hate visual art that plays with text, but it's a problem when the artist can't write. Jenny Holzer's "Protect Me From What I Want" has haunted me for decades, but from one moment to the next I can't remember Nauman's "The true artist helps the world by revealing mystic truths." It's like the O'Jay's "We've Got a Message in Our Music" or Elton John's "Sad Songs Say So Much": perfect self-refutations. At least those people didn't portray themselves as mystics.

Perhaps "The true artist helps the world by revealing mystic truths" or "The true artist is an amazing luminous fountain" are intended to be ironic. I hope so. His own account is, "It's true and it's not true at the same time. It depends on how you interpret it and how seriously you take yourself. For me it's still a very strong thought." He holds that these neon apothegms are intended both seriously and ironically, which is really hedging his bets, and also emptying the things of any meaning they ever could possibly have had.

This emptiness is an opportunity for art critics to make Nauman's work mean whatever they like; they can pile up layers, or display their own cleverness in the face of Nauman's extreme non-cleverness. Meaning itself, they often say, is at stake in Nauman's work. It’s folded, doubled, transcended, etc. "THIS IS THE COVER THAT DESIRES THE MASK OF LACK THAT CONSUMES THE NEED FOR HUMAN COMPANIONSHIP. THIS IS THE COVER THAT DESPISES THE TASK OF THE NEED OF HUMAN COMP." Robert Storr's gloss of this text runs like this: "Closing in on their psychic import without ever fully stating it, these linked but incommensurable propositions tighten the vise that holds the reader and increases painful awareness of the breakdown of the subject's relation to itself and with other subjects. Rock is obdurate and stupid; the consummate mask is mute. From such stony silence Nauman squeezes blood."

“bbbbbbbbbbbbbbbbbrrrrrrrrrrrrruuuuuuuuuuuucccccccccccccceeeeeeeeeee,” he chants, like 40,000 middle-class baby boomers at a Springsteen concert. "PLEASE PAY ATTENTION PLEASE," he pleads. But how? Why? And yet these are purportedly fundamental works that many people pretend to admire. No collection of contemporary art is complete without some.

Since he popped up in the 1960s, Nauman has done all sorts of things. Some work better than others, but none work well enough to attract me to a museum. I’d go to considerable lengths to avoid Nauman's work, though it seems like the stuff is everywhere, lying in wait at the art venue like the world's limpest ambush. One time I got trapped in the Philadelphia Museum, watching an interminable video, projected on a gigantic scale, of Nauman doing a funny walk in a narrow corridor. I think it was in St. Louis that I was subjected to some of Nauman's video installations depicting the torture of circus clowns. "Art," says Nauman, "is a matter of life and death."

"My work is about how people can be cruel to each other. It's just such a frustrating part of human experience." "The earliest performances things were things like you sit in the studio and what do you do. It turned out I was pacing around the studio a lot." Approaching Nauman's work more sympathetically, it recalls the pointed, seemingly intentional lameness of Andy Kaufman's comedy, or makes you groan as though you're trapped at a family dinner next to your beloved Uncle Fred and his continuous stream of puns. It seems to last a long, long time, but you'll get through it by shaking your head and groaning.

The difference is that you already love your Uncle Fred. Also, Uncle Fred does not charge admission.