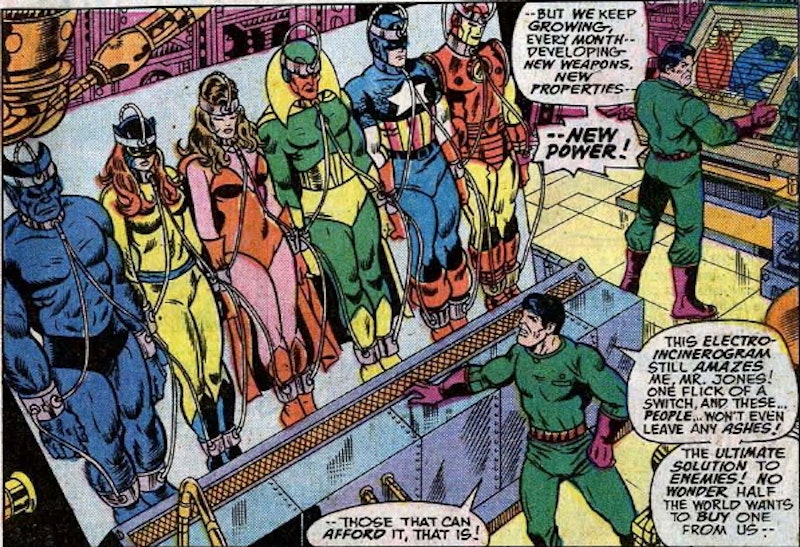 This week brings not only July 4 but a new Spider-Man movie—which reminds me of my near-simultaneous childhood introduction to American politics, Marvel super-heroes, psychedelic drugs, and conspiracy theories. (I’ll try to visit these and comparably important topics on a weekly basis here on Splice Today.)

Forty-one years ago was the Bicentennial, with the funky museum-on-wheels called the Freedom Train making its way across the U.S. and a few copies of Avengers #149 still on comic book racks. It’s only in the past year or so—as conspiracy theories about Atlantis, shape-shifting reptilian aliens, and government mind-control experiments have been all but mainstreamed in American politics—that I’ve come to fully appreciate how that one comic book prepped me for the cultural future at a time when I could barely read.

You see, the plot of Avengers #149 was that the world’s mightiest superhero team had newly returned from an alternate Earth within the multiverse but found themselves facing an evil government/corporate conspiracy run by then-Vice President Nelson Rockefeller. He was mind-controlled by a demonic alien Serpent Crown and aided by a flunky giant from ancient Atlantis. This led to the Avengers briefly being captured and trussed up on slabs with brain-shocking electrodes before they fought their way to victory.

I know what you’re thinking: How could so many important truths about how our world really works have been crammed into a single comic book? The answer may lie in the fact that according to the writer of that issue, Steve Englehart, he and some of his fellow Marvel writers and editors were on acid in the mid-1970s.

His comics were a big influence on last year’s trippy Marvel movie about Doctor Strange (who, like Spider-Man, was co-created by libertarian Ayn Rand devotee Steve Ditko). Marvel’s psychedelic period also helps explain those shining gold aliens in the most recent Guardians of the Galaxy movie, one of whom would apparently have been played by David Bowie had he lived a bit longer. I hope next year’s Infinity War and other space-based Marvel movies will continue to mine that weird cosmic streak in Marvel history. If they do, they could prove to be the most psychedelic thing to happen to mainstream culture since the Beatles.

Another touch of cosmic conspiracy in July 1976 came in the form of Marvel co-founder Jack Kirby’s premiere issue of The Eternals, the cover of which sported one of numerous giant, ancient head sculptures created by alien astronauts that cropped up in Kirby’s work for decades, long before the topic became an oft-mocked cable TV trope. The artist and editor of Avengers #149, George Perez and Marv Wolfman, went on to blow up the multiverse altogether over at DC Comics in the miniseries Crisis on Infinite Earths in 1985, which seems to have been a banner year for time-travel stories (see: Marty McFly, Rorschach’s journal, etc.).

If my brain to this day seems to some people to whipsaw between the weird and the mundane, no doubt an early education in comics had something to do with it. One minute they’re depicting a bank robbery, the next they’re revealing gods who can rewrite the history of the universe.

Indeed, what may have been the very first DC Comic I ever picked up, The Brave & the Bold #124, just a few months prior to the Avengers issue, I no doubt got because I loved the harmless Adam West version of Batman from TV reruns. In their goofy, kid-friendly way, though, those broadcasts had prepped me for unsettling meta-fictional things like Brave & the Bold #124’s tale of terrorists holding the artist of that issue (Jim Aparo) at gunpoint, forcing him to depict them triumphing over Batman.

Even belief in the multiverse has crept into everyday discourse lately thanks to the weird YouTube subculture of people (presumably with faulty memories) who believe the so-called “Mandela Effect” is rewriting the past, altering events from history that the believers swear they recall occurring differently. (I very much doubt most of these people did well on history exams.) Fittingly, the idea of the Mandela Effect was apparently born at a sci-fi and comics convention, specifically the 2010 Dragon Con. Or should I say “reptilian deception” instead of “dragon con”?

Stats on the site KnowYourMeme suggest that interest in the Mandela Effect peaked in a big way exactly during the 2016 election, when apparently a great many Americans were so desperate for explanations they began questioning the very fabric of reality. Who can blame them? It may be time for a reboot, as they say in the comics and film industries when too many continuity errors have piled up.

There are dangers to thinking in the free-associative, wildly open-minded manner of a conspiracy theorist, obviously. One might become obsessed with something trivial such as, say, the fact that Martin Starr seems to be virtually the only actor who gets to play two roles in the Marvel Cinematic Universe—computer geek Amadeus Cho in 2008’s The Incredible Hulk and high school principal Roger Harrington in Spider-Man: Homecoming—and then begin wondering if this has anything to do with his character from Silicon Valley, Guilfoyle, being in league with Satan. (And is it mere coincidence that Guilfoyle bears such a strong resemblance to Satanist vlogger Styxhexenhammer666?)

On the other hand, being steeped in open-minded paranoia might just empower you to save the world from actual stealthy threats. I’ll try to play up that socially-responsible side of the phenomenon, like a more straight-laced Hunter S. Thompson, here at Splice Today. Meanwhile, people like self-proclaimed autistic conspiracy theorist Outer Light can do the dirty work, like drawing attention to the fact that Spider-Man and his fellow Disney property Elsa from Frozen are now being used in a vast array of presumably unauthorized YouTube cartoons that seem consciously designed to inure toddlers to imagery involving bondage, violence, alcohol consumption, and water sports.

I wish it weren’t true. But then, I wish a great many things weren’t true these days. Time at last to confront it all, no matter how strange, with open eyes. Face front, true believer!