How he mapped the soul. 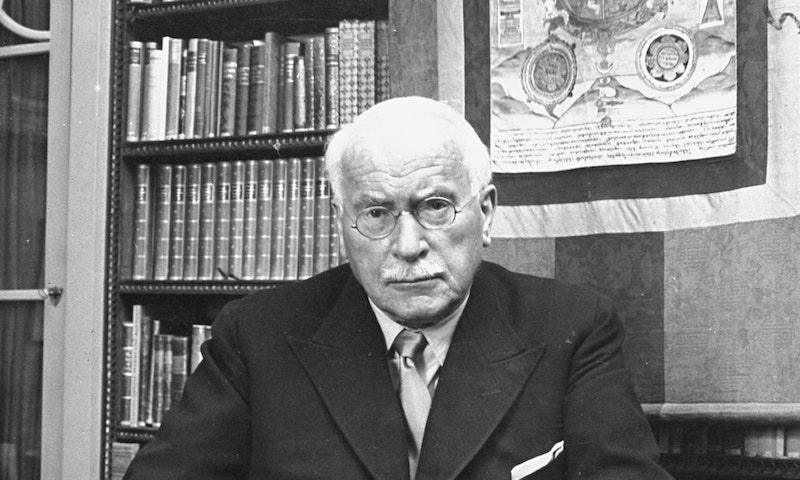 The main challenge to modern Christianity is not secularism. It's the work of Carl Jung. His theories have genuine evidential currency in the modern world.

Unlike Sigmund Freud, Jung (1875-1961) did not dismiss traditional religion. While Freud drew a line between neurotic behavior and religious rituals and called belief “an illusion,” Jung saw in religion an expression of age-old archetypes that could be useful for people negotiating both their inner and outer world.

Jung's thought of the unconscious of individuals as a vast ocean, and the ego like a small floating paper boat. Inside the individual is the ability to connect to the divine via universal archetypes that reside in the unconscious. “Even the enlightened person remains what he is,” Jung observed, “and never more than his own limited ego before the One who dwells within him, whose firm has no knowable boundaries, who encompasses him on all sides, fathomless as the abysms of the earth and vast as the sky.” Jung saw Jesus as in the process of individuation, the process by which we bring the conscious and unconsciousness minds into harmony. This is why Christ went into the desert to confront temptation even after he'd been baptized and declared his ministry.

The problem with traditional belief, as Jung saw it, is not the great symbols of religion like the cross. It's the dogma that resulted years after a culture's initial religious experience. As Wallace B. Clift observes in his book Jung and Christianity, “While institutional religions were originally based upon direct, personal experience of individuals (such as St. Paul's conversion), they tended in succeeding generations to become a matter of 'faith'… the original experience became impersonal, rigid, and unchangeable as it was gradually incorporated into a ritual to be repeated. The 'creeds' disputed the original numinous experience of individuals.”

While Freud reduced the psyche to simple causes and neurosis that enslaved people, Jung held that the psyche had a dynamic “calling.” Instead of rejecting Christianity like Freud, who thought religion was just the yearning for a protective father figure, Jung pointed to the important symbols in the faith and the antecedents in Christianity's story of the death and resurrection. He argued that Jesus “may have been an individual who was the fulfillment of an archetype.”

Jung's theories, while not entirely plausible at times, have nonetheless been largely born out by psychotherapy and modernism in the arts. The last 100 years have seen a wide acceptance of psychotherapy and the reality of the soul. Painting went from strict representation to the skewed, imaginative world of modernism and then surrealism, which sought expression of the pre-rational subconscious. Jazz broke away from the strict signatures of the brass bands, with Louis Armstrong singing from the soul as well as the head. The beatniks explored spontaneous writing and Buddhism, living to have numinous experiences and break away from Judeo-Christian walls. Since the 1960s, rock 'n' roll offered wide open vistas, often accompanied by psychedelic drugs.

For many of us raised in the mid- to late-20th century, these artistic expressions were our church. I recently heard from my older sister, who called to tell me she was going to see U2 perform. We talked about our history with the band, how I heard them on the radio in high school in the early 1980s after they released their album Boy, then fell in love with them after the release of 1983's War. The intense, martial, otherworldly sound of the band had been a pivotal experience for me, one as great as anything learned in my years spent in Catholic schools. With John Paul II and C.S. Lewis I could get to God through my mind; with U2, a band steeped in Christian imagery yet playing in a spiky modern style, I could feel God in the blood pumping through my veins.

In other words, and as Wallace Clift writes in Jung and Christianity, God is still speaking to us today. He has spoken to me through rock 'n' roll, fashion poetry, film-including, of course, the Jungian-inspired Star Wars-sex and the stories and myths of Catholicism, if not the dogmas.

Freud's sex-obsessed skepticism is dead. Jung's map of the soul is the great modern challenge to Christianity. Unlike the sophomoric doubt of Bill Maher and Richard Dawkins, or the reductive idiocy of fundamentalists, Jungians hear the voice of God in today's world while accepting the archetypes in Christianity that give the religion power: the singular power of the cross, the genius of Dietrich von Hildebrand, the profound moral power of the saints. Jung's spirituality accepts Jesus while also allowing for modern art, contemporary music, and the fascinating, divine depths of the subconscious. It says look around you, and look inside. You've already found what you're looking for.