When Comics Were Weird 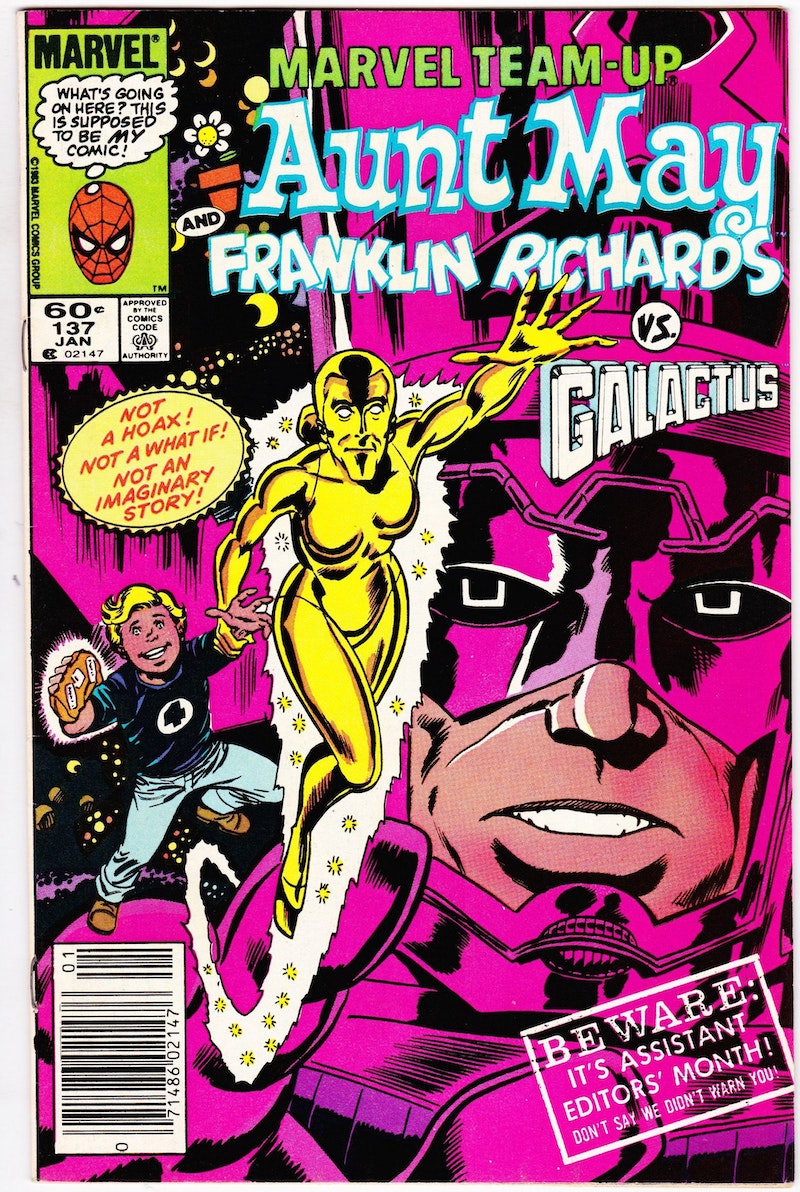 When people describe comic fandom as cultish they’re not playing around. While no one ever sacrificed their first born for an issue of Captain America, there’s no doubt that a large section of society views the new publication date of their favorite comic as a time for thanks. The stories, the art, the characters, the people who create them, and all of the elements that go into putting a comic book together have become legendary. When Marvel Comics finally realized that the full breadth of the comic experience was fetishized, the publisher came up with an ambitious project that celebrated the bond shared by the medium, its creators and fans.

The Marvel Assistant Editor’s Month was a concept art outburst that linked an array of different titles all published with a January 1984 cover date. During the previous month Marvel’s entire senior editorial staff attended the 1983 San Diego Comic Con, leaving the assistant editors and subordinates in charge. The Marvel Assistant Editor’s Month (AEM) united stories using only clear aesthetic threads without any corresponding narrative. Each AEM book had one or all of the following: prominent guest star appearances from Marvel creators and staffers, story elements highlighting the disparity between the comic pros’ everyday occupational routines and the action-packed exploits of their creations, and an absurd upending of fantasy tropes.

Under normal circumstances Marvel Team-Up was a series in which Spider-Man co-starred with a revolving cast of super heroes. This wasn’t the case in Marvel Team-Up 137. This issue featured the story “Twinkle, Twinkle,” writer/assistant editor Mike Carlin’s genius contribution to the AEM event (it was drawn by Greg LaRoque and Mike Esposito).

While baby sitting telekinetic child Franklin Richards Aunt May Parker (the mother figure of Spider-Man alter ego Peter Parker) is confronted by Galactus who seeks to utilize Franklin’s power for evil purposes. After wacky plot twists, the planet-eating scourge transforms the elderly Parker into Golden Oldie, a sleek platinum version of The Silver Surfer. It gets weirder when Franklin feeds Galactus a cream-filled golden sponge cake called a Twinkle. The giant villain instantly becomes addicted to the processed delicacy and “the vast energies of all the Twinkles on Earth.” To sate Galactus’ hunger, Golden Oldie criss-crosses the globe gathering up every Twinkle she can from every continent and region imaginable. When that still isn’t enough she zooms off into deep space where keen super senses lead her to a colossal “sponge planet” created by an alien who looks exactly like the Pillsbury Doughboy. Galactus sinks into the strange world’s quagmire of cakey sweetness and the tale ends with a clever twist that explains how this odd situation ties into Marvel Universe continuity.

The AEM’s irreverence tweaked books regardless of popularity or obscurity. Perennial fan fave Captain America and the short-lived sword & sorcery title The Saga Of Crystar Crystal Warrior flaunted narratives that were just as peculiar as “Twinkle, Twinkle.” In Crystar no. 5 the book opens with its eponymous main character ranting about his gaudy new costume while standing in the middle of Marvel’s 1980s Manhattan headquarters surrounded by office supplies, storyboards, an overflowing waste basket, his co-creators (writer Mary Jo Duffy and artist Ricardo Villamonte), and assistant editor Bob Harras. Crystar begs his creators to alter the inappropriate attire; Duffy and Harras rudely ignore the glimmering statuesque humanoid as they bicker over his destiny; Villamonte frantically scribbles and erases away while a grumpy office manager shouts orders in the background.

Captain America 289 repped the AEM absurdity with “Bernie America, Sentinel Of Liberty,“ a story written by J.M. DeMatteis and drawn by Mike Zeck. It's a madcap parody, an anti-sexist polemic, and a surreal dream sequence all rolled into one.

“When the cat’s away the mice will play” is the underlying message. Since the idea was born in the 1980s maybe the assistant editors could be viewed as Michael J. Fox figures and the AEM as Marvel’s answer to Risky Business. No matter how you look at it, Assistant Editor’s Month represented the first time a major publisher broke the fourth wall by giving comic buffs en masse an informal peek at the wild office in-jokes and genre-warping daydreams that their favorite creators usually had to leave on “the cutting room floor.” It was the first time Marvel used its creations to treat fans more like friends.