Scouring the details of a grade school picture. 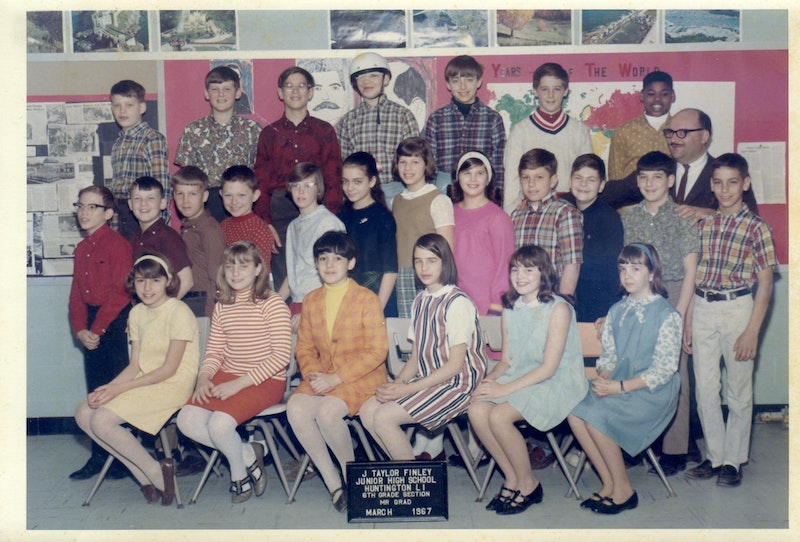 Take a look at me, kiddo, I’m your grade school dream.

It’s March of 1967, months before Bob Dylan, horsing around with The Band, wrote “Teenage Prayer,” one of the funniest songs from what would become known as “The Basement Tapes,” from which I paraphrased the first sentence above. (That Dylan, supposedly recovering from his motorcycle scrape in the summer of ’66, banged out over 100 songs that were goofy and dead serious—like “This Wheel’s On Fire,” “I Shall Be Released” and “Tears of Rage”—shows what a roll the 26-year-old was on.)

I look at the picture above—for reasons I don’t remember, Southdown Elementary School, where I went K-5, was in the process of renovation and we were shipped off to the foreign Finley Jr. High, which was unsettling—(I’m second on the left, middle row, and looking, ahem, uncharacteristically dorky) taken more than 53 years ago, and have a slew of observations. Look at all the madras shirts boys are wearing; that surprised me, thinking they went “out” a couple of years earlier and were replaced by paisley and polka dots, represented by a few of the young fellows. All dresses for the girls: I suppose this sixth-grade class snap was the last time before jeans were no longer prohibited by a dress code.

There’s Lisa Gordon (third left, bottom row) looking very smart, as if she’s imagining a future legal or business career; there’s Kate Baum (fourth left, bottom row), a sweetie in a groovy striped dress—my mom and Kate’s were friends, so I spent some time at her house a few years earlier, and, she sang, in ‘67, “Maria” and “Tonight,” from West Side Story for our class production, and as I’ve noted before, the teacher tapped me to sing a duet on those numbers, but I refused, and instead, Bruce Humm, always an amiable and bright guy (second left, top row) was the fill-in.

There’s Mark Stilwell (second right, top row) in a preppy sweater that could’ve predicted his future as a Yale graduate and high-level professional—I liked the Stilwells; Mark, his brother Teddy and their no-bullshit parents; Mrs. Stilwell, later on when we were in 10th grade, had the thankless task one night of driving several of us home from Howie Nadjari’s house, and one minute in, I barfed out the window, loaded on beer, and, after her instinctive, and warranted, barking, Richard Hoblock, doing a cut-rate Eddie Haskell, said, “Yes, Mrs. Stilwell, I admit we did have one Rheingold apiece,” and from the look she gave him, I’m sure it left the equivalent of a tattoo on Rich’s forehead that’s there to this day.

There’s Dicky Howard (second right, middle row), his mouth full of braces, a neighbor of mine who I played with, by default, as a younger boy, who once asked me, “If one of your brothers died tomorrow, whom would you choose?” I looked at him blankly, as if he were a total (in 1960s parlance) retard, and remember that the afternoon that JFK was shot, four years earlier, he rode his bicycle around the cul-de-sac on our hill, shouting “Kennedy’s dead, Kennedy’s dead,” as if everyone didn’t know. Dicky was just a little off, but he was a smart kid who, at least at that age, just wasn’t tops in social situations. In high school, he was weirdly anti-drugs, but we didn’t see each other much by then. I did receive a letter from Dicky in 1978, full of news about former classmates and he seemed to have blossomed into a productive adult; sadly, I learned many years later that he was killed in a car crash in Seattle in the mid-1980s at the age of 30.

There’s Bobby Walton (third left, middle row), sixth-grade innocence on his face that would give way to later risky business. He was always called “Walton,” even by some teachers, and I never figured that out, but I’d known him from kindergarten through high school (we hung out a lot, and shared pot dealers) and saw him on occasion during college years and right after. As a young adult, he entered the financial industry—obviously far different in ’79 that just several years later—and we traded lengthy emails in 2006, centered on business and family, and it was very cool, since although not a natural writer, Walton, at least once every other sentence, cracked me up with a turn of phrase. But since the crippling recession that began in 2008 I haven’t heard a peep. His company email defunct, and I hope at 65, he landed on his feet.

And there’s Bobby Ringler (fourth right, middle row), my first best friend, and we met in Mrs. Keebler’s kindergarten class. After nap time one day in December, I stood up, at the teacher’s request, and recited all the United States presidents in order; an educational tic that dovetailed with my still-present facial tic, and a quirk that a few of my brothers, laughing, asked me to perform, like a monkey, for their friends. In truth, I loved the attention and the older boys were sort of proud of their baby brother.

Anyway, Bobby, one of the brightest men I’ve ever known, took notice, and we were inseparable during those early years. His parents, How and Glo, were lovely, as were his grandmothers (who introduced me to kugel and other Jewish staples) and his brother Jackie and sister Susie. Since my mom rarely let any of my friends come to our house—too messy, not surprising given her bookish nature plus the wear and tear of five boys—I was often at the Ringler’s home on Strawberry Lane, where Bobby’s father, a doctor, had a portion of his house for patients, hours limited to when he wasn’t at Huntington Hospital. Bobby, who was at the top of our class—if not valedictorian, pretty damn close—and went on to Dartmouth and then his own medical career. He married well, to Robyn, and they have a grown and accomplished daughter, and are active in political causes in upstate New York. We always trade birthday greetings, and try to stay away from politics, which is difficult, but when all’s said and done, it’s a lifelong friendship, and those aren’t all that common today.

I see Chip Meehan (fourth left, middle row), a good guy, although when in Simpson Jr. High, he nabbed away an 9th grade girl I was sweet on, which left me bereft (playing The Doors’ “The End” back to back to back) for about… two weeks. I see Amy Sutherland, Liz Beers, Sten Sandlund, Ellen Simon, Benjie Smith and Andy Stone; at the moment, I can place the face but not the name on others.

One more note: what song do you think topped the Billboard charts in ’67? I was taken aback: it was Lulu’s “To Sir With Love.” And a shocker: The Beatles were only at #30 with “All You Need Is Love.”