Mutated Moppet Toys of the 80s

Unconventional toys of the 80s proved that even innocuous trinkets could symbolize a revolt against mainstream standards. 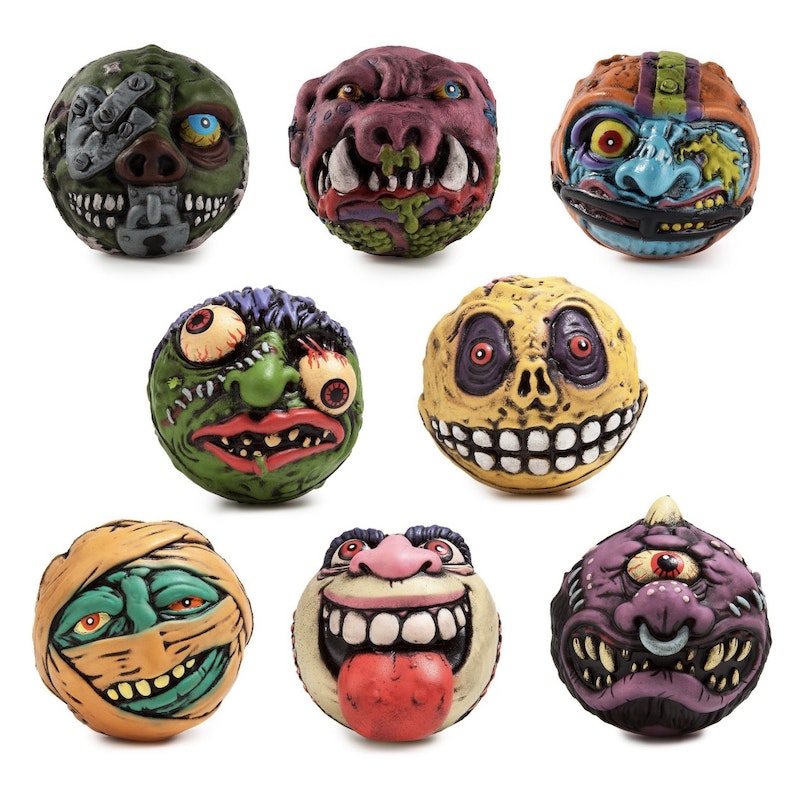 In the 1980s, The Smurfs, My Little Pony figurines, and Cabbage Patch Kids were some of the most popular toys made for young children. At the time influential far-right groups like The Moral Majority and the PMRC were vying for control over every last vestige of consumer culture and the entertainment media. The Cabbage Patch Kids and their harmless ilk then became ideal gifts prized both for their trendiness and inability to offend any moral or religious sensibility. The G.I. Joe, Transformers, and Star Wars action figures were equally ubiquitous. Though these offered a less childish mode of play, they were charged with the same clear-cut sense of right and wrong exemplified by the items aimed at younger children.

Fantasy archetypes and cherubic dolls were flying off the shelves, but inevitably the market became oversaturated thus setting off a backlash that materialized as unique toy concepts inspired by surrealism, satire, and a playful grotesquerie a’ la the short lived “little furry monsters” craze (i.e., the TV show A.L.F. and movies like Gremlins, Munchies, Critters, etc.) From the Madballs’ gratuitous deformity, to the hallucinogenic My Pet Monster doll, to the Garbage Pail Kids’ litany of low brow puns and perverse caricatures, unconventional toys of the 80s proved that even innocuous trinkets could symbolize a revolt against mainstream standards of beauty and morality.

Madballs: The Reagan era’s most bizarre toy was TCFC’s Madballs. These disembodied heads were sculpted foam rubber balls bearing the deformed/mutilated faces of monsters and victims of violence. Each different Madball design had a lurid name that playfully mocked its own image. There was Swine Sucker, a wild boar’s head with menacing tusks and frothy drool; Slobulus, another drooling monster, a green-skinned gouge victim with an eyeball hanging from its socket; Bash Brain, a zombie head with a shattered skull and exposed grey matter.

Including the football and basketball-sized Super Madballs, there were 19 different varieties of the toy, plus nine Head Popping Madball action figures. These featured “poppable/swappable” projectile heads. There couldn’t be a better metaphor for the subversion of reality and logic than disembodied monster heads blasting through the air. Madballs joyously scared the shit out of conservative parents, child psychologists, and educators.

My Pet Monster: Am Toys’ My Pet Monster was the strangest product ever created as competition for Cabbage Patch Kids, Teddy Ruxpin, and other plush dolls marketed as imaginary friends complete with complicated back stories, clothing and other accessories, and a stature similar to that of the kids who played with them. My Pet Monster dolls generally came in three different sizes: 16,” 22,” and 26.” There were different creature varieties in the MPM line. The fuzzy blue flagship version was the most famous, a kind of Gremlin on steroids crossed with something you might find in the acid soaked comix art of Rory Hayes. It had a purple-red punk rock hairdo, bulging bloodshot yellow eyes, stumpy horns, leathery paws with koala-esque talons, a furry purple mouth filled with jagged rubber teeth, and a shiny teal nose covered in gnarly ridges and warts.

The toy’s accessories included a pair of adjustable orange breakaway handcuffs made of plastic. These could be worn jointly by Monster and child. Kids often put the cuffs on themselves and pretended to be chain smashing super heroes. My Pet Monster dolls also came with a VHS cassette containing a direct-to-video movie that explained the beast’s supernatural origin.

Like Madballs, My Pet Monster’s big hook was wacky surrealism, yet the toy had a deeper purpose. While Cabbage Patch Kids and My Buddy gave children a replicated familial experience, My Pet Monster gave kids an imaginary friendship born from little more than extreme individuality. This thing was weird as hell but just as charming, soft, and huggable as any of its humanoid toy counterparts. It taught kids that comradery could be based upon much more than conventional family structure.

Garbage Pail Kids: It’s hard to imagine the 1980s without Topps’ Garbage Pail Kids. This series of bubblegum trading card stickers formed the perfect Rabelaisian caricature of the Reagan era’s crass materialism and all of the obnoxiousness and depravity that came with it. Absurd, scatological, and violent, the illustrations on each GPK card were more than just evil funhouse reflections of the Cabbage Patch Kids. These mutated moppets were rendered in an eccentric style that recalled the best works of Jack Davis, Richard Corben, and other giants of satire and underground comix.

It’s no surprise then that renowned cartoonists Art Spiegelman and Mark Newgarden were the creative duo who gave birth to the Kids. Their efforts were supported by an all star cast, a “who’s who” of the 80s alternative comics scene: John Pound, Jay Lynch, Howard Cruse, Grass Green, Paul Karasik, Mad alum Bill Wray, and comedy writer Frank Santopadre, among many others. The cards remain almost as popular today as they were decades ago; there are plenty of fan sites where you can learn about GPK minutiae. Beyond its aesthetic power, the Garbage Pail Kids series is important as a historical document of the relationship between childhood and the Cold War milieu’s darkest elements.