Watching Ballgames on ESPN is a Chore

Bonus: a brief look at a strange and “ritzy” CinéBistro movie theater. 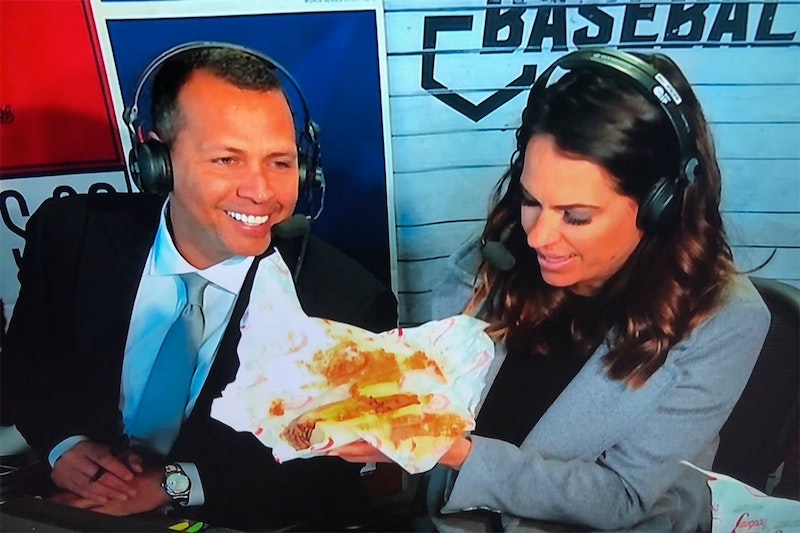 Last Sunday night’s coverage of the nearly six hour Red Sox/Dodger game on ESPN was torturous. It’s not that Boston lost (Sox fans know even nabbing the second Wild Card is an uphill battle this year, with starters lasting so short that the team’s relievers have slings on their arms), although that stung after 12 innings. This is a common complaint, no matter what team you root for: the trio of Matt Vasgersian, Alex Rodriguez, and Jessica Mendoza is the worst lineup of broadcasters since Sunday Night Baseball began in 1990.

Vasgersian, the putative play-by-play commentator, is the best of a lousy bunch—mostly straight-up calls and the benign comments that are found on any baseball broadcast, although he’s an enabler of his colleagues—but I rolled my eyes when he said that he wished he could’ve seen Paul McCartney and Ringo Starr play in Los Angeles the night before. I’ve no interest in seeing septuagenarian icons trot out a slew of hits from over half a century ago, but to each his own. But what does that have to do with baseball?

Mendoza is just awful: chattering non-stop, it’s clear she knows the game, but the litany of clichés and flat-out mistakes she sprinkles in breathlessly are grounds for muting the sound. (That’s an option many exercise, but when there’s a controversial call or replay, I like to know what’s going on.) On Sunday, the three were perched in the Green Monster Seats (274 seats) of Fenway Park, and Mendoza wouldn’t stop yakking about how they were partaking in one of the game’s very best sections.

In reality, as most real Sox fans know, the Monster Seats are a spiffy adornment introduced by the current ownership years ago, but the vantage point for actually following the game isn’t good. You can’t see half the field; most importantly, the many plays in left field, whether a hit scrapes off the edifice or an outfielder makes a spectacular (or bone-headed) play aren’t visible. Of course the seats cost a fortune—far more than the already expensive “regular” seats at Fenway—but they attract celebrities, wealthy locals, and fans who are checking off a “bucket list” item. I love seeing games at Fenway, but let’s be honest: it’s not among the most comfortable ballparks in the country, and I do get sick of people blithely referring to the landmark as a “shrine.” Owner John Henry and his management team have vastly improved many aspects of the decaying stadium they bought in 2002—the drainage system, for example—but like Wrigley Field it was built for an early-20th century clientele, which means the seats are tiny and the restrooms dumpy.

Then there’s Rodriguez, the former superstar for the Mariners, Rangers, and most notably, the Yankees, who’ll never reach Cooperstown because of his PED violations. If only he could tone down the superlatives, ARod, with a wealth of knowledge about current and former players, would be valuable. But he speaks too loudly, repeats phrases like “I LOVE IT!” throughout the game, as well speculating upon the “damage” a player’s about to inflict on the other team. Talking about the NL’s MVP rivalry between Cody Bellinger and Christian Yelich, he said, “I love it.” When an infielder is “putting on a clinic,” he repeats, “I love it!” Dissenting from Vasgersian and Mendoza, on the subject of extra innings, “I love it!”

I don’t care for Boston’s hometown NESN telecaster Dave O’Brien—not his fault, but he replaced the wonderful Don Orsillo who was disgracefully let go by the Sox two years ago—since he’s a “homer” and really boring. Fortunately, on many games he’s side-by-side with Hall of Famer Dennis Eckersley, easily the best “color” man in baseball, who’d be perfect for ESPN, but on occasion he lets a “shit” slip out and that won’t do. Not to mention the invaluable Jerry Remy. But O’Brien, for all his faults, is the legendary Jon Miller (who was the main Sunday Night Baseball personality for two decades; he was marvelous, successfully tamping down the sour Joe Morgan) in comparison to the current lineup.

On Monday, my son Nicky wrote on Splice Today about the CinéBistro, a small chain that has a location in Baltimore’s Rotunda complex. Nick complained about place’s smell, like “a McDonald’s ball-pit,” which I don’t notice. It’s an odd theater: for Baltimore the matinee prices are very high ($65 for four as opposed to $36 at The Charles), and there’s a strict “21 and over” policy because they sell booze. This makes no business sense (which makes me think the venue is a money-laundering operation, although that’s my own unsubstantiated conspiracy theory) since they shut out kids and teenagers who’d be prime targets for their mainstream fare, meaning superhero and horror movies. Downtown, the Landmark Theater at Harbor East also has a bar, but there are no restrictions. Obviously, if you want a drink and look underage you’ll get carded. Why won’t CinéBistro do that?

As Nicky said, the seats at the “luxe” theater are very comfy, the aisles wide, and although it’s freezing inside, that’s par for the course, an abomination you’d think conservation activists would jump on. The couple next to me was really doing it up: huge salads and a mountain of fried chicken parts, with glasses of red wine, but I didn’t get any waft of the grub. I can’t imagine eating a big meal in the dark and the waiters are unintentionally obtrusive, but can’t really complain, we chose CinéBistro to see Stuber, so these are mere observations.

Right, Stuber. I’ve seen worse films this year and it zipped by in just over 90 minutes. As Manohla Dargis wrote in The New York Times, Stuber is “A breezily violent two-hander and a dubious feature-length commercial for Uber,” but who’s not used to promiscuous product placement? It’s an action/comedy that made me laugh half a dozen times, mostly from the performance from an actor I usually can’t stand (Kumail Nanjiani, a weak link on HBO’s Silicon Valley) and has the ubiquitous cop-killer revenge plot, which is fine by me.