Goodbye Serialites and delusional yappy bores: Red Scare's "The Zoo" is the best podcast ever recorded. 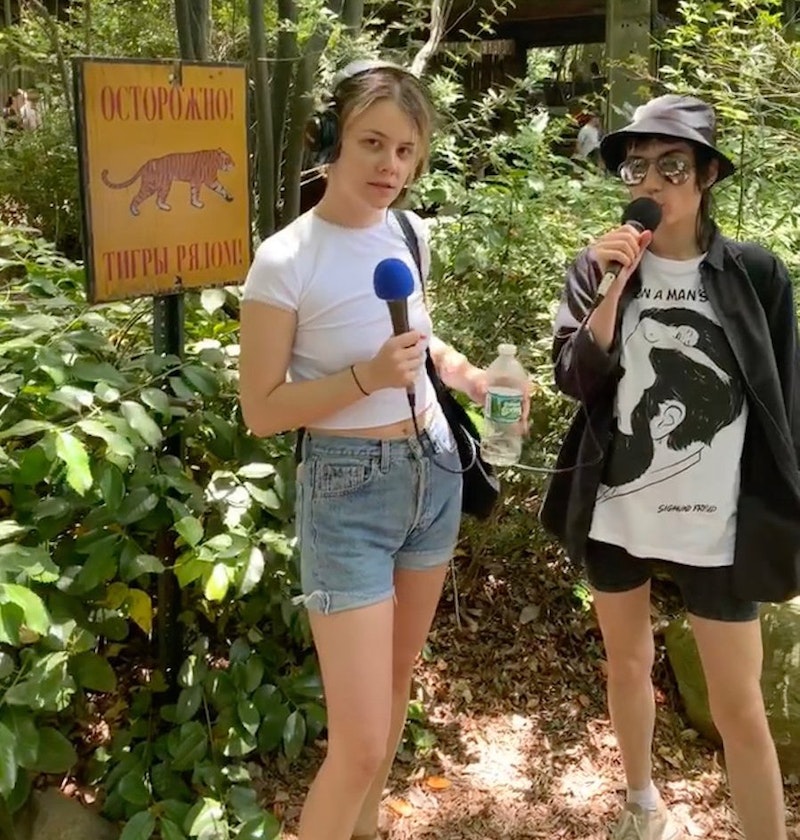 Dasha Nekrasova and Anna Khachiyan at the Bronx Zoo

Last week, Jennifer Miller in The New York Times asked, “Have We Hit Peak Podcast?” Yes. Please. No more. People have asked me to start a podcast. Never! This is the podcast. I have other outlets. I’m not going to scream into a microphone for an hour for free. If someone wants to pay me minimum wage ($15).

One of the subjects of Miller’s piece, Morgan Mandriota, started a podcast in 2016 that lasted exactly six episodes. That was The Advice Show, but now she’s back with Hard and Deep, another sex and dating show. “I’m going to have a set strategy, do the research and make sure I know what I’m doing, instead of just seeing what sticks […] It definitely won’t be taped at a library where janitors are walking around, yelling in the background of each episode.” On the failure of The Advice Show, Mandriota said, “You can talk about the trees outside as much as you want, but if you’re not going to serve listeners and do it in a way that’s engaging, your chances of going viral are low.”

Why not record in a library with people fussing about in the background? If you’re interesting, you can make a show anywhere about anything. Look at Red Scare: best known for periodic recriminations from jealous leftist detractors (like Noah Berlatsky), if you ask me the best show they’ve ever done is “The Zoo,” an hour long recording of hosts Anna Khachiyan and Dasha Nekrasova walking around the Bronx Zoo talking about what they see: monkeys, lizards, bears having sex. There’s no agenda, there’s no politics, very few “hot takes,” and little else other than “theater of the mind.” Nekrasova and Stavros Halkias (of Cum Town) say that ironically fairly often, but remember that it was Howard Stern who first harped on it and proved that anyone interesting can carry a radio show by themselves—they just have to keep going forever.

This level of interest has nothing to do with their politics—they’re compelling in and of themselves. “The Zoo,” just like a classic Howard Stern rant, proves that the problem with podcasts isn’t abundance, but illusions of importance. Most people just aren’t that interesting. The best broadcasters can make speech sound like music, and they remain compelling whether or not you agree with them or not. It's as rhythmic and a performance as music, even dance. There is a dance! Not everybody has a speaking voice that others will volunteer or even pay to listen to—meanwhile, Nekrasova and Khachiyan make thrilling radio running around the zoo letting minutes of dead air go by. It doesn’t matter, and it works because they’re interesting. Sex puns are no compensation for a lack of a personality.