Five years ago, I never thought I'd be working on a televised comedy show as a production assistant. 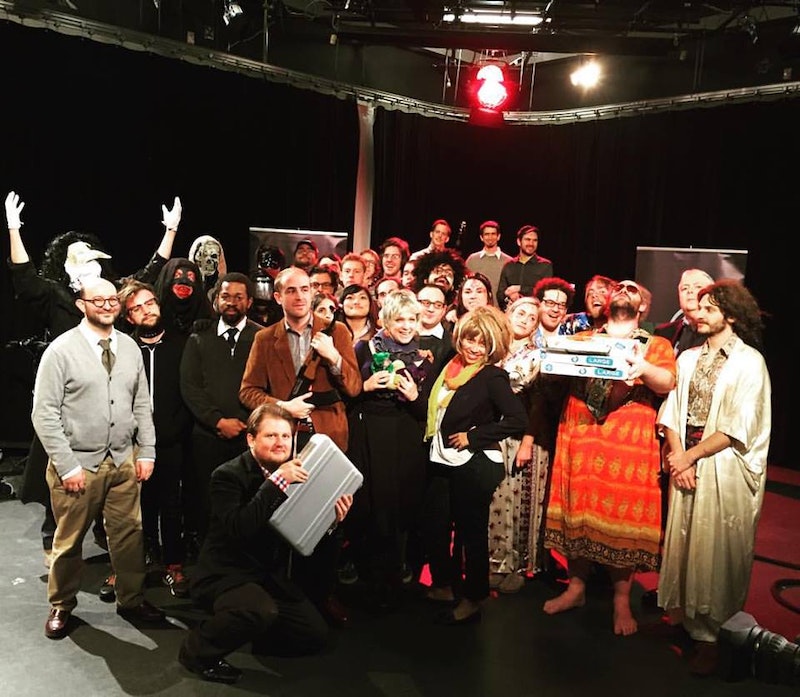 If someone told me five years ago that I'd be working on a televised comedy show as a production assistant and mingling with celebrities like Rose McGowan, Michael Shannon, and Janeane Garofalo, that'd I'd be playing the role of "Lil Abe The Amish Executioner" acting opposite Gilbert Gottfried, that I'd be twirled around in mid-air by a pagan hippy mystic while I wore an occult master's beak and shroud, or that I'd be dancing in glitzy/Broadway style choreography which doubled as a marriage proposal for New Jersey's most pathetic English geek, I wouldn’t have believed it. No one ever said life would be blessed by these nutzoid adventures, but this all happened. It was business as usual on the dearly-departed NYC TV show The Special Without Brett Davis.

Often called The Special, from 2014 to 2019 the show was shot live, and broadcast locally and on the net every Wednesday night usually from 11 to midnight near Manhattan's Columbus Circle from the TV studios of the MNN public access channel. Central Park, Lincoln Center, and the Plaza Hotel were only a few blocks away from the show's headquarters. Despite its surroundings, the roots of this program go back to the mid-2000s to culturally remote northern New Jersey. Comedian/performance artist Brett Davis grew up in Roxbury Township where he made a name for himself as a regular caller on WFMU's The Best Show portraying the sub-skid row rapper MC Steinberg. As MC Steinberg, Davis found regular gigs on local TV and at NJ basement venues, house parties, and indie rock bars. With Andy Kaufman as his main influence, Davis/Steinberg aggressively blurred the lines of reality and fantasy using his appearances to turn the indie rock scene's cookie-cutter atmosphere upside down. His outrageous dedication to Steinberg's public portrayal created a lot of confusion and a dedicated local fan base. One of Davis' early supporters was a bizarre multi-media artist from Sussex County named Darren Mabee.

While MC Steinberg was psyching out drunk college kids at New Brunswick basement gigs, Mabee was billed on the same events performing in We Are The Seahorses, a half-naked/high energy/dayglo/gender queer electro-music explosion that confronted the mindless homogeny and heteronormative fascism of American pop culture. They were too transgressive for the p.c. crust punk/straight edge prudes of the all-ages hardcore community, too exhibitionistic for Brooklyn's aloof retro rockers, too lowbrow for John Cage worshipping avant garde "purists," and too old and weird for the quasi-glam fashion plates of suburban Jersey's teen emo scene.

Nonetheless, The Seashorses' originality and live electricity couldn't be denied. Like spiritual forebears (WWF, John Waters' early work, The Crazy World Of Arthur Brown, The Jerry Springer Show, etc.), they were maligned as a trashy gimmick act and yet the quartet maintained a sizable fan base packing in crowds at unconventional music and art events all over the Northeast and mid-Atlantic U.S. They even brought their metaphysical storm along on a few d.i.y. tour dates which found them performing for unsuspecting audiences in places like Virginia and North Carolina.

Around 2010 the main minds behind MC Steinberg and We Are The Seahorses began developing their work into something that transcended the parameters of music concerts and college parties. Davis and Mabee, along with ex-Seahorses Sally Burtnick and Frank Flaherty and a host of like-minded artists and comedians from Jersey and Brooklyn, started producing their own live comedy events regularly at NYC venues like Shea Stadium, Over The Eight, and Big Snow Buffalo Lodge. The mutant breed of characters that'd be prominent on The Special first came to life at these affairs. Their attendant storylines were no less complicated than those found in the works of Lucas, Rowling, and Tolkien.

A well-known artist who took note of Davis/Mabee's creative insanity was the legendary comedian/writer Chris Gethard. Gethard became the number one fan of the pair's first Brooklyn comedy productions and had an early guest spot at Davis' monthly live comedy event “The Macaulay Culkin Show,” which was initially a staple at the now-defunct East Williamsburg loft venue Shea Stadium. When Gethard's talk show was picked up by the commercial cable network Fusion, he relinquished his MNN time slot to Davis/Mabee. The swap was immortalized in Gethard's final public access episode, which boasted a fourth wall-blasting storyline co-starring Davis as the high-strung conspiracy theorist/self-righteous MNN producer Smith.

Shortly thereafter, this was followed by the first of several episodes of Davis' hallucinogenic show-within-a-show Truth Or Myth with Smith and then the official debut of The Special Without Brett Davis. Naturally, The Special's first episode depicted the "real" Brett Davis murdered by an off-camera sniper after it had only been on for a few minutes thus creating a quick origin story for the show's odd title.

I discovered The Special via Mabee and We Are The Seahorses. During the 2000s my multi-media art project Human Host was based in Maryland and we brandished beat-driven electro music, theatrical singers, and physically demanding performance art. These were also big elements of The Seahorses' work, so HH was frequently booked with them as our two projects performed on the same circuit of day-glo art freak venues that dominated much of the northeast's DIY scene back then. HH and The Seahorses became close friends and played together so much that I was regularly assigned the task of videotaping their sets. If it wasn't me, there was always someone shooting video for them at these gigs, so there are recordings of nearly every We Are The Seahorses concert. As 2014 rolled around memories of this crazy group's comprehensive self-documentation were still fresh, so I wasn't shocked when Mabee took to social media to announce that the ex-Seahorses and all of their NY/NJ friends were putting on a live TV broadcast.

What was shocking was how complex this turned out to be. In the 2000s The Seahorses improvised most of their comedic between-song banter and non-music shenanigans. Though The Special's dialogue was mostly improvised it followed an expertly crafted plot line, printed rundowns were supplied to the cast and crew, and stage manager Kate Sweeney was constantly (sometimes frantically) giving cues to keep the continuity and timing of each episode on point. Even with this attention to detail, it was hard to understand the show's ongoing story lines, most developed during The Special characters' pre-TV days (I was still living in Maryland at that time). Consequently, when I began regularly attending its tapings it seemed like nonsense. One of the most powerful testaments to The Special's greatness came from the fact that even without awareness of its narrative minutia it remained mesmerizing, albeit in absurd ways which had nothing to do with the creators' epic-building intentions. With or without dense interwoven plot twists the show stood as the best possible evolution for Davis/Mabee's innovative early work.

What made The Special Without Brett Davis an unforgettable experience for those who worked on the show? How did I begin working on this program? What adventurous new ideas did The Special bring to comedy and television? Did the show really have three different guest stars who'd been convicted of violent crimes? And what is Gilbert Gottfried really like?

More in a future installment!