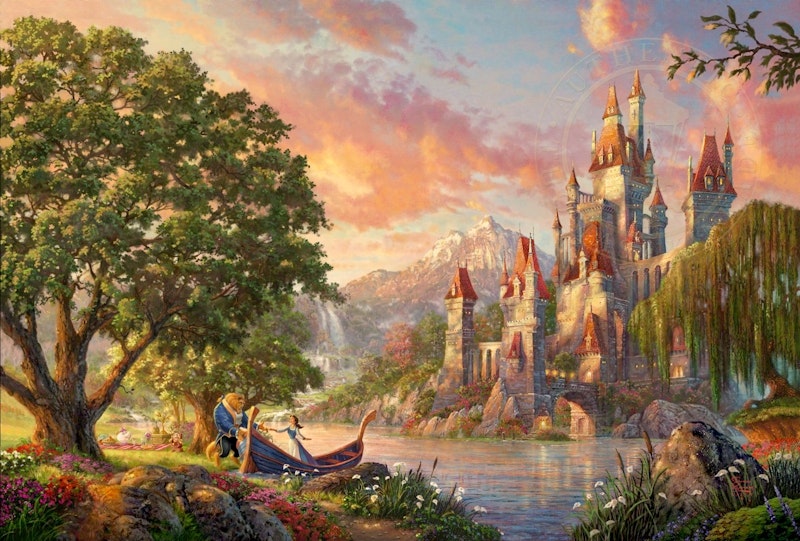 It was all about “the glow,” they told me. The special “Thomas Kinkade Glow.” Whenever they said it, I imagined a trademark symbol after the phrase.

I hated the glow. To me it was the epitome of all that was wrong with the world. Draping reality in layers of gauzy tulle so it’s easier to take. Reducing the world to a village of Cotswold cottages, with cobblestone streets and old-timey streetlamps, a whitewashed church and a gathering of carolers, a milkman and a general store. It represented a selective way of viewing the world—you never saw “the glow” gilding rows of office cubicles filled with people secretly on Facebook; you never saw it halo a river of gridlocked cars. The glow didn’t reach places where there was war, or poop.

For a long time I went into “art print” stores at the mall—certified Thomas Kinkade “dealers”—and sneered at the paintings. There was a succession of pictures that idealized each season—New England covered bridges in fall, pastel meadows in spring, Christmas trees through windows of snow-covered houses. There was even a series done in partnership with Disney—Beauty and the Beast having a picnic beneath a rainbow, their pink castle in the background. I hated it, but something always pulled me into the store.

“Can I help you?” a certified Thomas Kinkade dealer would ask me.

For a long time I just said no.

Then one day I said, “Maybe you can.”

We were standing in front of a giant print: a wisteria-crowned Victorian house at twilight, tiny fireflies blazing in the dusk air. The picture frame was golden and baroque. The painting cost $400.

I said, “Why do people think this is beautiful? I just don’t get it. I mean, I’ve tried.”

He peered at me with a wicked little grin. He beckoned with his index finger for me to lean forward. “Look closer,” he softly said.

So I stepped closer to the painting. I got weirdly close to it, so close that I was breathing on it. And then I saw it. I saw what all those salt-of-the-earth Americans found so stirring, so evocative, so powerful and profound in these paintings.

It was porn. If you looked close enough, through the windows of the cottages or into the horse-drawn carriages going to Grandma’s for Thanksgiving, you saw it—people were having sex all over the place. In all sorts of positions and couplings. Some of the animals were getting it on as well. In one meadow I even spotted a couple of nymphs with a satyr. You had to really lean in and squint and concentrate, but there it was, and there it had been the whole time. It turns out that the secret to our universe is also what powers the magical world of Thomas Kinkade.

The dealer said, “Now you know.”