If you can stand him at all. 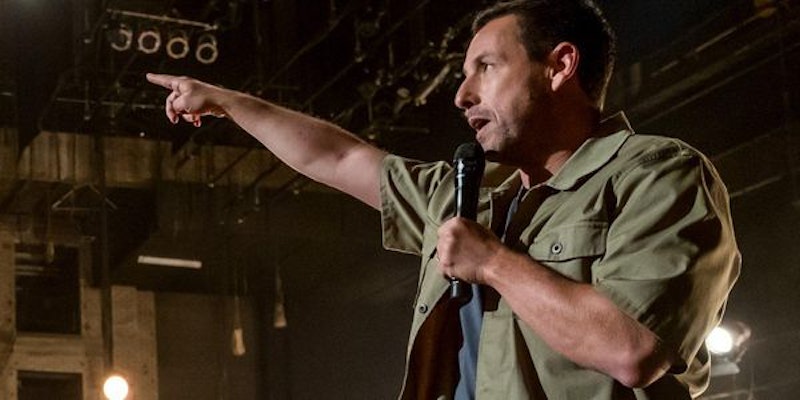 “Uh oh, this Honda Civic smells just like a butt-hole” may be the most Adam Sandler lyric known to man. The song (“My Uber Driver Smells Bad”) also has a quintessential Sandler finish: “I can’t believe the smell in these Uber cars/Oh wait, I shit my pants, I’ll give him five stars.” It was him all along—Sandler. He had his pants loaded and he didn’t know it. He was the problem.

“Uber Driver” is from 100% Fresh, the comedian’s first stand-up special on Netflix. The material is all new and includes 20 songs, a good number. If you can stand him at all, Sandler’s dumb-ass songs are infallible. In three minutes he’s got his dirty thumb atop some main artery of existence. Then, no matter how you feel about it, you’re laughing. Worse, the tune kind of stays with you. Last night my head kept playing the refrain of “Bar Mitzvah Boy” (like “We Didn’t Start the Fire” danced by a Keebler elf). I’ve been trying to remember the chorus. There’s something about it. This thing, whatever it is, is conventional. Any musical effect part of a Sandler song has been heard and half-heard a thousand times on radio and CD. Whatever I’m thinking of, recording engineers have a name for it: a frosty, subdued echo that made the chorus linger. I feel subverted for liking it so much.

The chorus proper was just the song’s title. Sandler has help with his musical output. (The helpers are Dan Bulla and Paul Sado, with Bulla playing keyboards at Sandler’s appearances.) Even so the songs sound like they lunged out of his head, perhaps during a shower or a long shit. If they didn’t sound that way, they wouldn’t sound like his songs. Sandler puts them across with an authority that I find key to his act, at least as a musician. He doesn’t take a given song and make it goofy, the way Weird Al does. He takes the idea of song, just song in general, and makes that goofy. He constructs a recognizable musical framework—“Pissing in the Shower” sounds like a New Wave song, “Uber Driver Smells Bad” sounds like rap—and assigns the singer a bupkis motive for speaking out, such as detailing one’s bathroom habits or complaining about a stinky Uber driver. These dumb things are why the singer’s going to all this trouble with the beats and the notes and the rhyming, or half-rhyming. When Sandler commits music, the results are born shambolic; yet they become advanced enough for ambition to be mocked. It’s like the monkeys in 2001 using the gift of tools to bang each other on the head. Some musical equivalent of the desire to stand upright is being played for a chump.

“Unexpected, groundbreaking,” Netflix says of the new special. No, the material is the same old, now entering late middle age and showing no strain. Your balls get bigger as you get older. It’s weird to get up at 4:30 a.m. and do things. He and his wife really go at it sometimes, bed-wise. There’s a dickhead Tesla that reminds me of the cow that feuded with Farmer Stinky Thumbs Arbuckle. (The Tesla wears a neck brace for a court appearance.) Grandma is still taking her lumps. The Sandler male still experiences a gravitational slide toward the rectum and private parts of other males.

This last tendency reflects homosexual panic less than homosexual whadda-ya-gonna-do. Life is skidmarks and snot. You can’t record your kid’s soccer game and share it with someone else, because all the time an idiot commentary was running out of your mouth and now you’re embarrassed. You can’t take a simple dick pic and show it around (“At least I can be part of the conversation”) because a ghost shows up in the background, and the ghost is holding a ruler against your dick. So if you go on the roller coaster with some guy you don’t know, it’ll be gay. Worse, you’re going to miss him. “I think of you a lot, sir,” Sandler announces from the stage. “I think of you a lot.” And now the subdued echo effect from “Bar Mitzvah Boy.”