Shark Tank: A Celebration of Capitalism

Show that allows the rich to flaunt their wealth has to irk socialists. 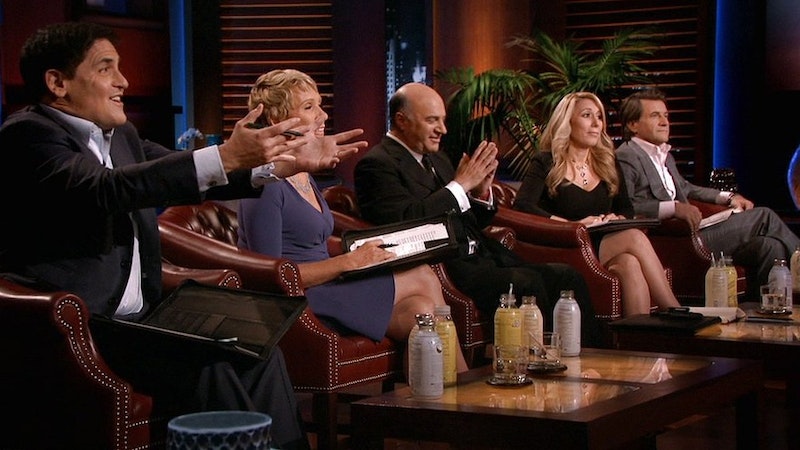 A nerdy-looking guy named Steve, who possesses no discernable artistic talent but has considerable goofy charm and humor, walked out to face the five sharks on Shark Tank—a reality show in which entrepreneurs make presentations to solicit investments from a panel of business moguls—and did a dance as part of his presentation for his business—"I Want to Draw a Cat For You"—a one-man, online operation in which he draws stick-figure drawings of cats in about 10 minutes for 10 bucks a pop. Four of the sharks quickly passed his investment offer, but billionaire Mark Cuban ponied up $25,000 for a 33 percent equity stake in his business.

That’s the beauty of Shark Tank. A nobody with a dumb-sounding idea has the gumption to go on the show and ends up hired by one of the nation’s most successful entrepreneurs. Try escaping the drudgery of the cubicle like that under pure socialism! Shark Tank is an unbridled celebration of capitalism.

But the show goes dark sometimes, such as when an overly-optimistic striver’s yanked back down to earth by the cold-eyed sharks. It’s heartbreaking to watch an earnest, hard-working casualty of a nation that tells them to dream realize they’ve wasted so much time and effort. This happened to a guy who’d dipped into his childrens’ college funds to pursue a wacky scheme to replace all the magazines on doctors’ office with his invention. The pain was written all over his face after undergoing an ordeal that nobody should be subjected to in public. On the other hand, the show offers moments of satisfaction, such a pair of former frat boys asked for backing to to start a business called College Foxes Packing Boxes—hot girls who help you move—and the sharks sent them packing.

Shark Tank’s producer, Mark Burnett, who was behind Survivor and The Apprentice, tinkered with the cast in season three, replacing the bland, taciturn infomercial honcho Kevin Harrington with the garrulous and often caustic Cuban. It was like a basketball coach who found the one player he needed to make his team into a championship contender. The addition of Cuban, who’s much richer than the rest of them, is the equivalent of Larry Bird joining the 1979-80 Boston Celtics.

Burnett made his show into a boy’s club, so there’s normally just one female shark—either it’s brassy NYC real estate mogul Barbara Corcoran or Lori Grenier, aka “The Queen of QVC.” Corcoran holds back nothing—she once called fellow shark Daymond John, founder of FUBU apparel company, “a short man,” and John hadn’t even provoked her. Tech mogul company Robert Herjavec’s the “nice guy” shark who often bristles at the abrasive comments his fellow Canadian, Kevin O’Leary, who doesn’t act Canadian at all, makes to some hapless contestants, perhaps as “tough love.” O’Leary co-founded and sold The Learning Company to Mattel for $4.2 billion—a bad deal for Mattel, by consensus.

O’Leary, who only half-facetiously calls himself Mr. Wonderful, plays the “heavy” role that Simon Cowell performed on American Idol, but he’s genuinely funny too. When someone turns down his offer and begins to walk off the set, he’ll often yell, “You’re dead to me.” He told a contestant who was crying, "Don't cry about money. It never cries for you." O’Leary’s essential to the show’s success. He’s the hard guy, but also the main provider of humor, if not the only one. O’Leary’s a socialist’s nightmare—an unrepentant capitalist who brags about his love of money and the $2000 bottle of wine he drank last night. He rails against the “murder” of money, by which he means throwing it away on a bad investment. A signature O’Leary line: “I’m a very simple man. I just want to make money. I can listen to anyone until I get to the point where I can’t make any money and that’s where I’m at with you.”

Don’t overvalue your company if you want to court the sharks—they see that as greed. Make it clear the sharks will be able to get their money back in a reasonable time period, a make-or-break issue. Don’t talk about sales “potential.” Tell the sharks you have a pile of inventory parked in a warehouse and be prepared to explain it, though you’ll most likely fail. That’s one of the biggest warning bells on the show—it tells the sharks you’re either lazy or can’t sell.

A memorable moment on the show came when a guy who was trying to pitch a massage business revealed his minuscule sales figures. “You did 30 people in four years?” O’Leary asked him in disbelief. Bringing up your strong sales figures is the single best way to get a once-skeptical shark’s eyes to sparkle—it never fails. They emit a collective purr. It makes you think that someone could go on the show, tell them their sales numbers and margins and walk away with a deal for “product x.”

Reality shows are mindless fluff, but Shark Tank has teaching potential. Budding entrepreneurs could learn how to impress investors, and the pitfalls to avoid. Don’t call Cuban “Cubes.” One guy tried that and Cuban said he was dropping out of the negotiation.

Shark Tank’s not for hardcore socialists, for whom the sight of five cocky moguls gathered in one room could make them verklempt. On the other hand, performative socialists like actor Jim Carrey and other woke Hollywood luminaries would probably dig it. It’s not clear how much of the utility, pleasure, nourishment, or entertainment Shark Tank contestants offer the public would be available under socialism. Bernie Sanders has said, “You don't necessarily need a choice of 23 underarm spray deodorants or of 18 different pairs of sneakers when children are hungry in this country.”

This is an implied threat of government control of the deodorant and sneaker businesses, and the private sector in general. Who knows, maybe Bernie would want to limit the number of cat drawing websites too. That’s the thing about dyed-in-the-wool socialists—they just don’t have much of a sense of humor.