An evening with the SETI Institute. 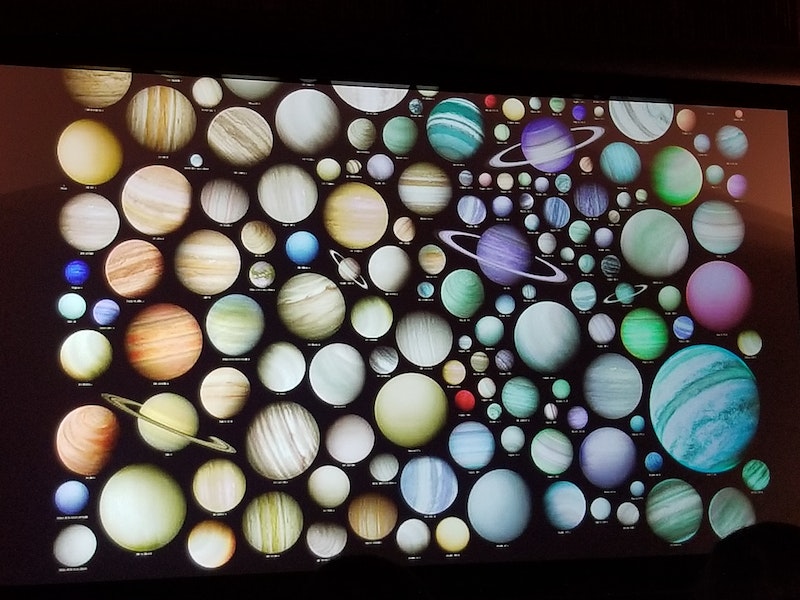 I received an invitation to attend an event held by the SETI Institute at the headquarters of the Explorers Club in Manhattan. When I saw the requested attire was “after work cocktail,” I knew no historic announcement of a positive finding in the Search for Extraterrestrial Intelligence would be forthcoming that evening. On the occasion that aliens are detected, it will be either white tie or biohazard suit.

It was a fun evening, which included seeing a prototype of a form-fitting spacesuit under development at MIT that’s designed to be flexible, unlike the pressurized-gas-filled shells astronauts now wear. MIT engineer Akshay Kothakonda discussed this research, the subject of his PhD dissertation. He also brought a virtual reality headset programmed to simulate a walk on the surface of Mars, which I experienced after my third champagne.

The SETI Institute, based in Mountain View, California, was in town to develop contacts of the crucial financial kind for its wide-ranging research and outreach regarding the scientific possibilities of life in the universe. The organization is involved in activities ranging from sifting through radio signals for signs of extraterrestrial civilizations, to sending field trips to Chile to examine conditions analogous to Mars, to working with the Girl Scouts on science education.

The universe is rife with planets, pointed out Bill Diamond, the institute’s president, in a presentation that included a slide showing a multitude of worlds, an artist’s conception based on data such as that from the recently retired Kepler spacecraft. More planets mean more chances for life and perhaps intelligence to emerge, in accordance with the Drake Equation.

Diamond was upbeat about the science the SETI Institute performs and the possibility of finding life somewhere out there soon, perhaps in a microbial form in our own solar system. But he also confessed to being particularly interested in the Drake Equation’s final term, L, with its possible limit on how long technological civilizations survive. Plus, Diamond muttered something about not wanting to talk about current-day politics, as being too depressing.

An image flashed across the screen of the SETI Institute’s founders, including the late astronomer Carl Sagan. This evening, I thought, was much in keeping with Sagan’s interests: the SETI discussion alongside the prototype spacesuit and virtual reality glimpse of Mars. Sagan was an enthusiast of human space exploration, unlike the many astronomers who see it as a waste of money and a diversion of resources away from space probes and telescopes.

Sagan’s vision tended to the optimistic. He speculated there might be advanced civilizations throughout the galaxy, which had survived by overcoming their own self-destructive tendencies. He imagined that humanity might gradually improve itself while moving outward from our planet over many generations.

I admire that vision, even share it to some degree. But that evening, I also was thinking of someone else, someone I’d once known, who to my mind represents much that humanity must overcome if it’s to have a future: Lou Dobbs.

Nearly 20 years ago, at the height of the dot-com boom, Dobbs quit his job as CNN anchor to found Space.com, a media company focused on space. I was with the company from the start, working as a writer and editor as the company grew rapidly and then as it encountered turbulence when the dot-com bubble began to deflate.

Dobbs was a difficult boss, and nearly a year in, at a contentious, crowded meeting I told him that the company was “dysfunctional” and its “management style” needed to be “improved.” He promptly said he’d accept my resignation. I asked if he was firing me, and he repeated that he’d accept my resignation. I asked what if I didn’t want to resign, and he said that then I had to change my morale and get back on the team. My answer was “I resign.”

I saw Dobbs years later, since we have the same periodontist, and we had a friendly conversation in the elevator. However, when he later floated a possible 2012 presidential run, I felt I had to warn the public about what a Dobbs presidency would be like, which I did in an article at David Frum’s website FrumForum. In retrospect, Dobbs touted Trumpism before Trump, and it’s no surprise that he has emerged as a close outside advisor to the latter.

At the SETI Institute event, I scanned the cocktail party attendees to see if Dobbs was there. He wasn’t, perhaps because space has long since faded among his interests. In any case, he’s been busy whipping up paranoia about the other type of “aliens,” people coming from Central America and Mexico.

I put those dark thoughts aside and focused back on visions of the stars and planets. Lou Dobbs is alive, and Carl Sagan is dead, but I’m betting humanity’s future will be shaped more by the astronomer than by the blowhard.

—Kenneth Silber is author of In DeWitt’s Footsteps: Seeing History on the Erie Canal and is on Twitter here: @kennethsilber