NBC's Thursday night lineup leaves me nauseous. A decade or two from now, will this be my social downfall? 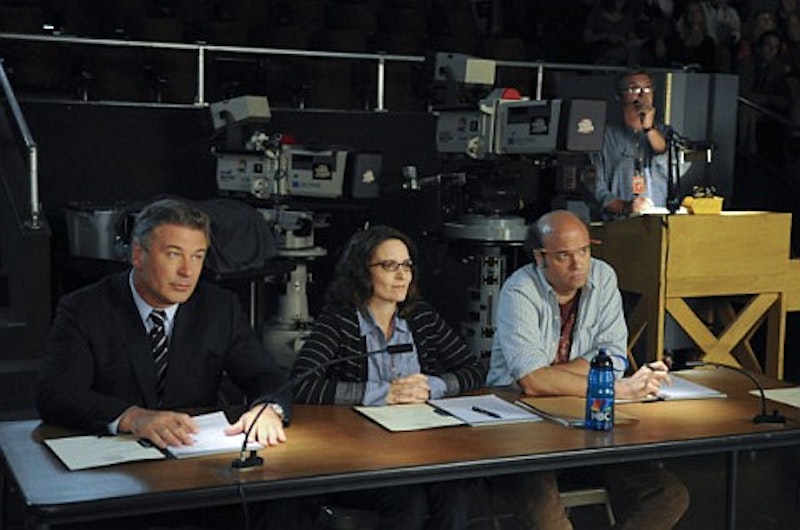 Tangent A: As my four-year old son is drawn deeper and deeper into the multi-media matrix—his obsessions, these days, are Transformers and costumed superheroes—I wonder whether it would have been better had we somehow cut him off from television, the Internet, popular entertainment, and opted to rear him in a sealed-off, commercialization-free environment where a lack of pixelated stimulants might result in greater imagination and creativity. Then it occurs to me that without a shared commercial heritage, he might be socially crippled upon reaching adulthood.

Tangent B: Recently, in a semi-social situation, I heard the Strokes’ Is This It in its entirety and experienced a warm, intense nostalgia for free-wheeling good times that I didn’t live through at the time the album was released.

Tangent C: I don’t follow any current television comedies. None.

It’s not like I abhor The Office, NBC’s flagship Thursday Night comedy; I’ve enjoyed the bits and pieces I’ve caught over the years without actively watching an entire episode. There’s an artful design to the forced artlessness the show proffers, a sort of joy to the cinema verite/hand-held cam/fake documentary whatever one has to buy into to take Dunder-Mifflin seriously on a not-funny-ha-ha level. But see, I can take it or leave it—and when I take it, that’s mostly because on this show Steve Carell is working on some 50th floor level of comedic brilliance that makes everything else he’s accomplished totally irrelevant—which is more than I can say for the network’s other Thursday night fare, none of which I’ve actually seen, though I’ve suffered through several batteries of promos. Exactly what puts me off about Community, 30 Rock, Outsourced, and Parks and Recreation is difficult to put into words, but just the idea of being strapped to a chair and forced to watch all of these shows, back to back to back, gives me the shakes. I think of this modern, laughtrack-free brand of comedy as “smugwave,” a celebration of awkwardness and cluelessness that’s less laughing with than laughing at, a cerebrally cruel perspective that views life through irony and values affectation and catchphrases and a relentless, purposeless nihilism—an heir apparent, of course, to Seinfeld, but somehow shallower, more disposable.

I’ve spent a lot of time lately trying to figure out why I can deal with Seinfeld re-runs, but not Liz Lemon’s hipster-mom glasses or network-approved xenophobia or the return of Chevy Chase to prime-time, and I think it comes down to this: when Seinfeld was in its heyday, I never, ever, met anyone who reminded me of Jerry, Elaine, Kramer, or George. Seriously. Nobody. They were fictionalized narcissists who were a decade or two older than me who lived in a city I’d never been to, but wondered about. In contrast, I’ve worked with, passed on the street, and loathed people whose quirky personal style is borrowed from or is exactly the same as 30 Rock and The Office and Community characters; it’s all a stage-y, over-exaggerated simulation of whatever the writers and producers think thirtysomething social/work/school life is supposed to be like right now, Dilbert but way more surreal, cult reference on top of cult reference, winks slam-dancing winks, a vacuum of pregnant pauses.

In other words, NBC’s Thursday Night lineup feels less like an escape from reality than a distorted mirror of it, and the popularity of these shows causes the audience to unconsciously attempt to recreate them, which just makes life more hellacious for those of us whose Indian co-workers aren’t goofball Western-culture conduits but real people who are at work to actually get shit accomplished. The promos NBC uses to collectively pimp these shows try to mass-market them as vicarious orgasm, alt-comedic drum rolls and fist pumps and air-quote displays of excitement, but I’m not fooled, and I just can’t get pumped for smirking as community-college misfits blow a show trying to find someone’s pen or Amy Poehler gazing into a camera lens like a lobotomized public servant or Pam and Jim pulling that chagrined, non-expression expression they favor whenever Michael Scott or Dwight do something outrageous that are supposed to be representative of the expressions smug viewers are flashing at home.

What scares me is that someday in 10 or 15 years, I’ll find myself in a situation where intimate knowledge of one of these travesties is key to being able to relate to someone I want or need to impress for personal or social reasons, and I’ll have to feign ignorance or just come right out and admit that, “Well, not to be crass, I didn’t waste time with any of those abominations when they were happening, I guess I adopted a seriousness into my personality, and I relished procedurals, and found enlightenment and transcendence in the small, precious morsels of black-comedic gold they had on offer.”