Leap Into the Void 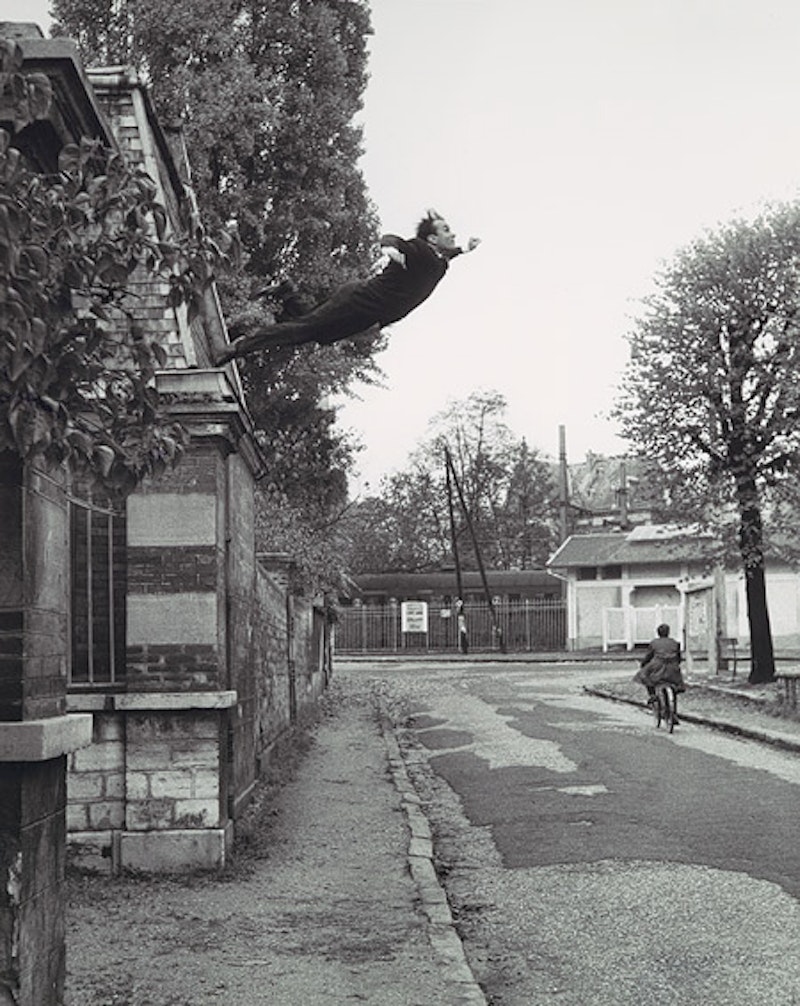 I have never understood people who stand for hours in art galleries, in the same spot, jaws trailing, before the same great ancient oil painting. I’ve tried. I’ve tried to force it but the only result is that my feet get tired, my brain becomes dulled with the grayness of effort and I start to see patches of color or opaqueness on my retinas, like heat rising on tarmac.

Do I envy those people in art galleries? Perhaps. But my jaw does drop.

Like when Yves Klein jumped into the void and I Googled him to find out what number he gave to the color he patented and caught him doing it. He dives out of that first floor window like a wave, like a drawn back bow, like the beginnings of an exponential function leading straight into heaven. His arms are outstretched, his gaze raised high; like he’s diving out of oxygen into rich, thick water. It’s the most graceful doctored suicide I’ve seen in all my life.

The road beneath the window is so straight, the unaware cyclist so upright, the scene is so commonplace that I adore this little shred of fiction. Ignoring technological advances, I pretend to fall for this hoax. More incredible even than finding fairies down the bottom of my garden, here is Yves Klein LEAPING INTO THE VOID. Thankfully, Man Ray was around to capture the scene and dutifully dodge out any mattresses that might have been lying around on the pavement all beery-stained and out of focus; and Yves Klein truly believed in the miracle of documentation.

I do sit and stare and this image for hours. This is my favorite masterpiece, this and the hundreds of weather-shaken walls I see down unwanted backstreets in overlooked neighborhoods. Rothko was nothing compared to erosion.

Yves Klein leaps out of the wallpaper of all my houses. A crappy representation of this remarkable photograph, printed off in a spare moment at one paper-based job or another, has been following me around for years.

I’m staring at it now. It makes me think of Kierkegaard. Kierkegaard leapt a lot too, but he didn’t pose for as many photographs.