An Open Letter To Snooki From Joan Rivers 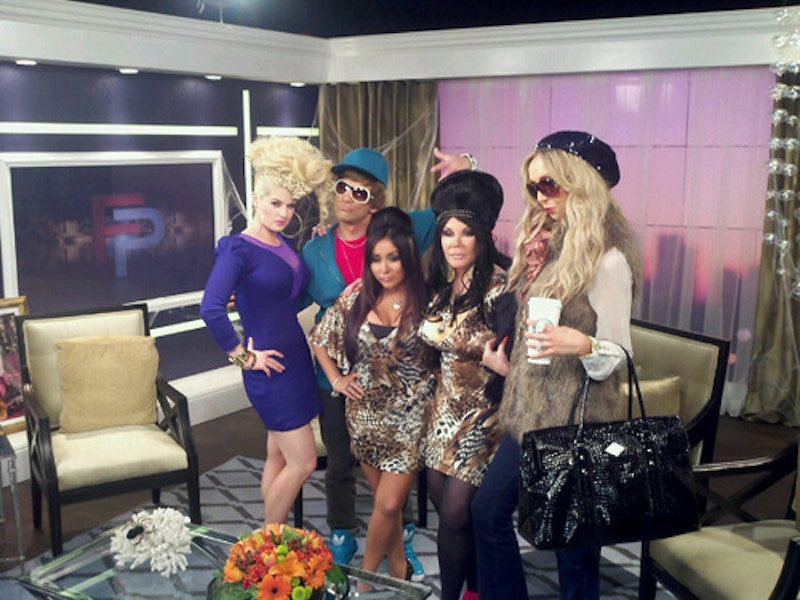 Don’t tell my (third) husband I said this—he’ll crucify me—but, you know, there’s something about you that I can’t live without. I can’t do it. What can I say? It’s your perfect Butterball glow; that bump on your head. And—yes!—the leopard print. Honey, how could I possibly enter a room of people without the leopard print?

I know what you’re thinking. But don’t worry. It ain’t gonna happen, not over my dead body.

My husband thinks you’re a train wreck. The partying, the drinking, the sex. But I said, hey! What a fabulous train, and if you knew any better you’d be on it, too, my friend. I don’t understand why he just doesn’t let me enjoy my television programs, you know? Let me tell you: I never complain when he’s salivating over those Kardashian bimbos—another story, another letter.

Anyways. So I’m gonna be honest with you, Snooks—can I call you Snooks? I am so glad you’re mugshot-ing, chugging, and tanning your way through Hollywood. I mean, Mazel Tov. What is it with you Jersey girls? It’s like somebody should change the state flag to a couple of rollers and a tanning bed. And that’s my kind of state. It’s about time we had a hot mess like you as a star. Forget Lindsay Lohan and Paris Hilton and Nicole Richie circa 2006. Only real stars can make people want to dye their skin orange.

But never let a man hit you and get away with it. Why do you think God invented stilettos? And while we’re at it, tone it down with the drinking, honey. I get that it’s your thing, it’s just that...you’re not even five feet tall. Your liver, honey. Your liver! My cousin Suzy—also an alcoholic—was such a drinker that she won the 100 million dollar MEGA MILLIONS but was too out of it to collect the prize by the deadline. True story, swear to Fendi.

You’re such a breath of fresh air. You know that? So real. I get sick of these Kardashian and Real Housewives bimbos who get coked out on Botox and yap yap yap. Who cares about these plastic bitches? Why are they on all the magazines? But then you came along and I gotta hand it to you: you’re a real woman, although, like me, you look sort of like a drag queen, which makes it even funnier. It’s called show business, people. There’s nobody like you—the most popular costume on Halloween. And I went as you, too.

That’s what I love about you: you’re funny and you know people are laughing at you, so you give everybody what they want to see while you laugh back and rake in the millions. If that’s not business savvy, I don’t know what is.

Okay, Snooks. I don’t want to take up too much more of your time. I know you’re busy being on television and having a million Twitter followers. But I wanted to make sure I congratulated you on making it to the New York Times bestseller list! I mean, wow. I really didn’t even know you could read—but who needs to read when you can pay to have people read to you.

People are always going to hate on you, Snooks, but don’t drink the haterade. They’re just jealous because everybody wants to make five million dollars by drinking and having sex with hot guys, then becoming a New York Times best seller by writing a “novel” about being drunk and fucking hot dudes. Just be you, or some approximation of what your publicists/stylists/agents/managers/etc. tell you to be.

But what are you going to do after Jersey Shore, Snooki? I mean, every television show comes to an end, or an old cast is easily replaced by fresh blood, in which case “Snooki” could get replaced by Bufanaquishria. I know there’s no way in hell you’ll stand going from A-list to D-list. Could you be a guest judge on RuPaul’s Drag Race? Or maybe, you know, get some kind of talk show—”Bump It Up With Snooki” ? Some spray tan for thought.