The fine line between degradation and privilege. 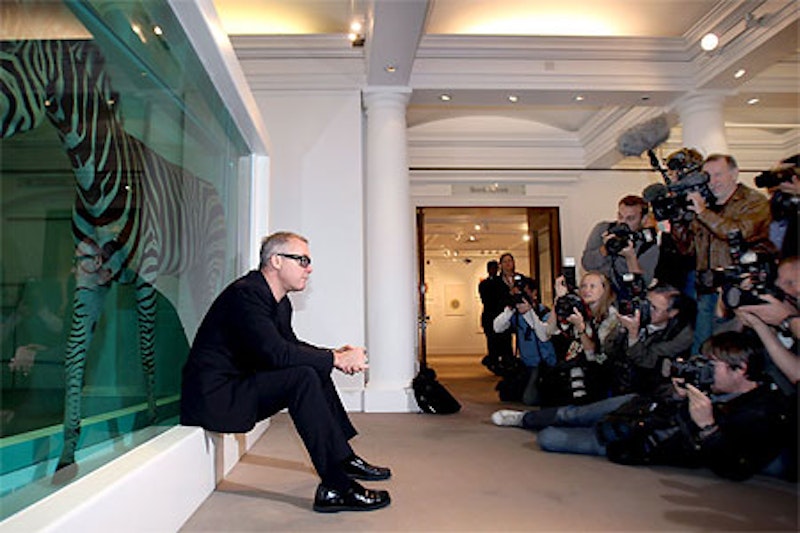 While Damien Hirst lounges about his 300-room manor house, in slippers presumably made from fetal pigs and smoking cigars replete with the remains of Pharaohs’ hearts extracted from canopic jars, you now have the opportunity to work under his distant, indirect tutelage, for a little more than living wage.

Whether or not you expect your slow climb to creative greatness to originate from being in the presence of Hirst’s radiant success as a notable living artist, please bear in mind that you’ll need to possess all of the skills with which every great artist must arm themselves. His two page synopsis of every precise skill necessary to execute his morose ideas would give pause to just about anyone who’s previously considered themselves an “artist”—but then again, if you could do all of these things within Hirst’s precise parameters, shouldn’t you have some modicum of success already? How does “Damien Hirst’s Bitch” look on a resume anyhow?

Hirst, like most artists you’ve heard of, is a marketing machine who is well aware that the sound of every ruffled feather is the arrival of another dollar. Sure, anyone who works in the scale and complexity which Hirst employs would surely need a team of people to assemble his works, but how much Hirst himself physically contributes to these works is a constant point of controversy, but it’s really not a new one. Questions about production and the nature of art date back to Warhol, and even back to the uncertain history of the protégés of many Renaissance painters lending their own brushes to works that bore their teachers’ name. Is the "artist" the idea, the execution, or a graceful synthesis of both? That’s a rhetorical question. Maybe it’s even a koan.

Sure, learning the complex mechanics of working with biological remains could be infinitely profitable, but how does an artist emerge from Hirst’s deep, dark shadow and use these skills in a manner that is not directly referencing Hirst himself? It seems like a massive sacrifice of personal creative values to spend such a considerable amount of time executing someone else’s ideas. Is Hirst a genius because he knows how to market his own manufactured mystery and controversy, or because he has really great ideas? I prefer the crystal-covered skull left outside the museum in which Hirst’s diamond-encrusted skull was being displayed. Hirst is a cartoon of artistic pretension.

We’ve seen artists like this before. The world’s worst artist, Michael Godard, has created an artificial miasma of hype around himself which disintegrates under any amount of scrutiny, and allegedly employs “artists” to create his pathetic tableaus of Vegas-themed anthropomorphic foods, while vociferously claiming that he’s the most popular and/or richest artist in the world, and channeling at least a dozen domain names towards his violently stupid works. This isn’t to place Hirst and Godard in the same realm, even slightly, but the principle’s the same: they use the impenetrable veil of “art” to flummox the labyrinthine art world into giving them power.

The fact that Hirst is paying such a paltry sum to his employees is a point of contention, but if you’re pursuing a career as an artist, it’s unlikely that you’re making too much anyhow. Maybe $32,000 a year won’t feel like you’re being stepped on, and maybe you can pretend that your dreams are transmutable for a little while, but each time Hirst sells a piece that he hasn’t touched for $10 million (which you cannot, contractually, ever talk about being a contributor to), it’ll probably sting a bit.