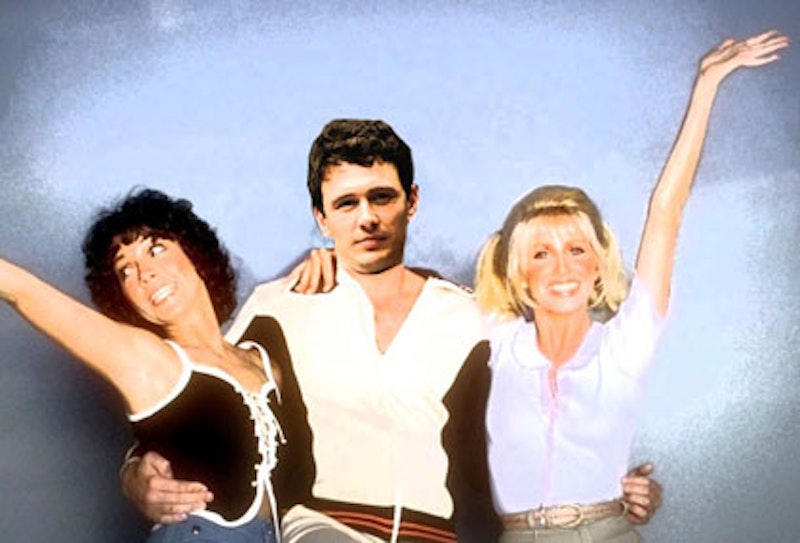 James Franco hit Park City, Utah, this weekend for the 2011 Sundance Film Festival, where the actor and upcoming Oscar host had no movie to promote—but rather an interesting art project involving Janet, Chrissy and Jack.

Franco: Where's my fucking satchel? My 13-inch MacBook Air is in there, with, like, my entire new novel.

Janet: You mean your man purse?

Franco: Hey, I've been to Europe—like Barcelona and Prague, and they call it a satchel over there. Europe is really advanced and cool. There's more to life than just San Diego, you know.

Franco: That's not funny Janet. Don't make fun of a person's art. Just because you threw yourself at me and I rejected you doesn't mean you have to act like a 12-year-old.

Franco: What the fuck?

Janet: Your mustache, dude. It's like the Unauthorized Biography of Pubic Hair. Call your agent. I can see it on The New York Times bestseller list.

Franco: Jeez, Mrs. Roper. You really are a sick old lady. No wonder Stanley's face is a frozen grimace. I meant my 13-inch Macintosh laptop "air," what they call it because it's light. That's what I carry around at Columbia and Yale, where I drink my Odwalla "C Monster" to maintain my immune system, since I'm so busy.

Mrs. Roper: Well, next time you want to plug in that 13-inch, you know where I live.

Chrissy: She lives upstairs. Is that where Europe lives?

Franc: Shut the fuck up, Chrissy.

Janet: Chill out, James—don't talk to Chrissy like that or I'll give up your sublet, which reminds me, you're two weeks late on rent again.

Franco: Honey, my DVD royalty check from Pineapple Express alone could pay that rent a hundred times over. I could stay in this dank 70s condo for two goddamn years, no problem. Ain't working at no stupid flower shop. Ain't got my hair all dyked up like Pat Benatar or something.

Janet: "Or someone," you mean.

Franco: Hey I got an MFA in creative writing. I can use any words I want. Just throw in some line breaks in my thoughts, and violà—poetry.

Janet: This is going to be a long half-hour show.

Franco: It's a meta-joke, meta like "ironic" and postmodern and stuff, like when you take one thing and—oh, forget it.