The Skeleton in Slippers 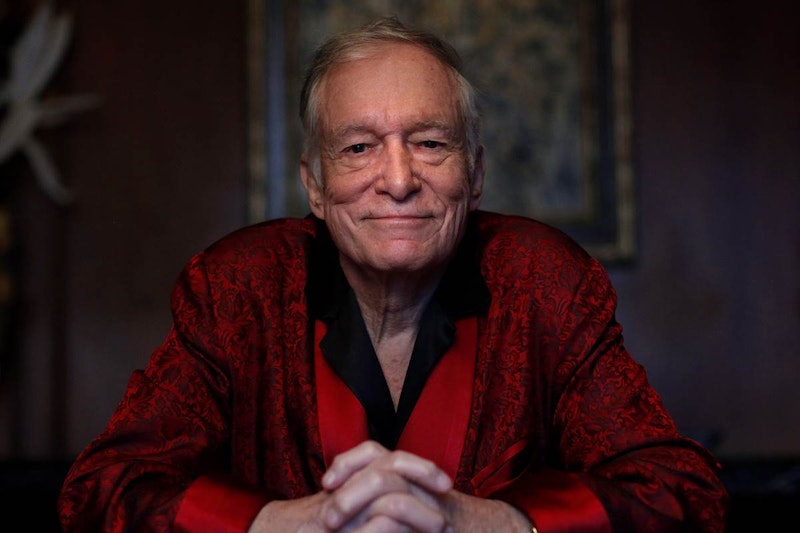 I imagine Ross Douthat as having the lips of a soft man determined to speak. Beneath them is a plump, flaunting bowtie. Perhaps it’s brown as his beard, which is trimmed. Or perhaps the bowtie is plum.

Douthat swirls the brandy in his snifter and touches the glass’ base to the table. “Liberals,” he says, and his gravity is dutiful but not affected. “Liberals,” he continues, “should ask why their crusade for freedom and equality found itself with such a captain, and what his legacy says about their cause.” He looks to the ceiling. Douthat means old Hefner, that combination of skeleton and yachting cap whose pelvis would get entangled with so many young blondes. Dead now, dead late enough for his dream to have shriveled and rotted. When last seen, it was something like a streak of liquid with fur. Not that Hef lost his dream; the problem was that he kept it. Hefner died at 91, and he was still going at those blondes. They didn’t want him.

They fucked him because of money, and he fucked them because of compulsion. This pajamaed stick pharmaceutically grew another stick and then twitched it, and he thought doing so was an exercise in life. This skeleton lurked in rooms and corridors that were supposed to be luxurious but lacked daylight and taste; eventually (Douthat assures us) they failed to lack in dog piss. The chief inmate, that slippered punk, stocked the rooms and corridors with women stuck in a permanent loitering, a clutch of chicks herded from rec room to grotto, from grotto to projection room, from projection room to bed, over and over until their brains creviced.

We hear of eating disorders and drug abuse. We wonder about what the girls signed, since Hef had no janissaries, just lawyers. Apparently the documents didn’t foreclose telling us about the dog piss or the boredom or Hef’s tendency to call Quaaludes “thigh openers.” Maybe the girls stayed for the same reasons so many people stay with their bad set-ups: fear, laziness, the belief that the Lush Good Thing before you must be the thing that you want. These motives have also fed a good deal of masturbation, though one isn’t supposed to see it that way (or not the last I heard). Hefner trafficked in both, a man who bred stultification near and far so he could sit atop his pile and watch ranks of bored girls wilting beneath his thumb.

But he spoke about equal rights, and he was more liberal than conservative. How did this despair-mongering parody of a man wind up on my side? That’s the question Douthat poses, his challenge to the liberal’s self-accounting. The answer is this: Hef crouched indoors all day, absorbing media. He was a room boy, a fellow who lives off magazines, TV, videos, and the rest. Not dumb, but always trite, his approach to media was simple: go with the good stuff, whatever that might be. He wanted the best stereo, and he wanted the top-drawer ideas and opinions. These were liberal because people of that bent hold so many media jobs. They hold the jobs because belief in equal rights and social progress have become hallmarks of the educated classes, most of whose members are educated as a result of equal rights and social progress.

Hef saw little in the liberal’s creed to put him off. Perhaps that’s a judgment on liberals. But Jimmy Swaggart was put off by exactly zero of what he saw in Christianity. People lie to themselves, and they sort ideals to flatter their personalities. Nobody ever became a liberal because of Hugh Hefner. He became one because of everyone else.