What the late publisher did and didn't do for women's lib. 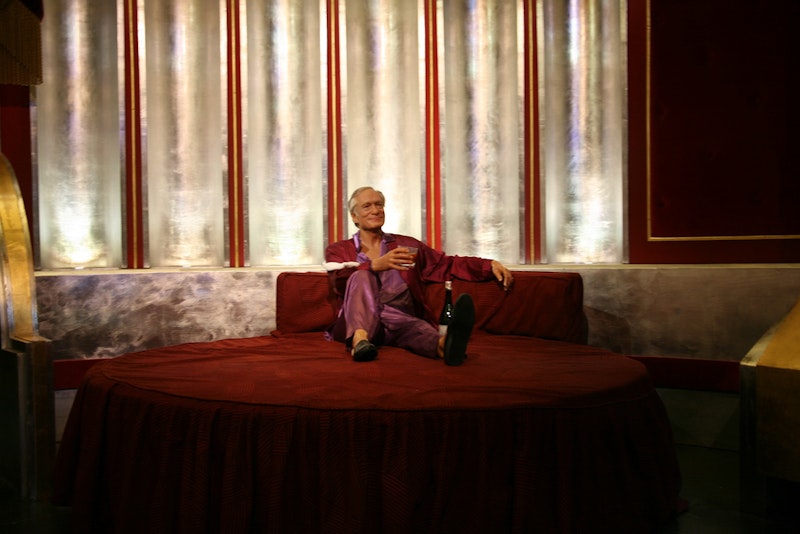 In 1963, a woman calling herself Marie Ochs walked into the Playboy Club in New York and applied for a job. Ochs was actually a young journalist named Gloria Steinem, going undercover for the short-lived magazine Show. Her two-part expose would undermine the perception of the Bunnies as glamorously carefree, and reveal that they were in fact overworked and underpaid, with the costumes leaving them with swollen feet and bruised torsos. Steinem's article was the opening shot in what would be a strange relationship between Hugh Hefner and feminists, where they’d be adversaries and allies, sometimes at the same time.

Inspired by the Kinsey Report, Hefner would preach a philosophy that encouraged sex for pleasure, including the idea that nice girls also enjoyed sex. In 1953, it was a revolutionary message, as Victorian views of sexuality still persisted. Reliable birth control was a challenge to find, and divorce was not only a social taboo, but difficult to obtain in most states. While the pressure to remain chaste until marriage largely focused on women's behavior, men lived in fear that a night's dalliance might result in a shotgun wedding. The idea that sex could be fun was a nice fantasy, which Hefner knew how to sell.

In a lot of social issues, Hefner maintained liberal views. He was openly supportive of the Civil Rights movement, ahead of the curve in coming out against anti-sodomy laws, and had a permissive view of marijuana use. While his views on women's rights were consistently liberal, especially when it came to policy, on more interpersonal aspects, he was a little harder to pin down.

Playboy was most famous for its nude centerfolds, and the selling point for the clubs were the beautiful Bunnies. Hefner promoted the idea of the "girl next door," to get away from the overly seductive pin-ups of the 1940s, in addition to making a clear distinction from porn, and present normal women in realistic settings. The charm of the Playmates was a playful, flirty demeanor—as though they were always in on the joke. The settings were usually something one might actually encounter, like a dorm room or a low-lit den. A classic from the 1950s was a Christmas centerfold of Bettie Page trimming the tree in her birthday suit, as one does.

In the same year that Steinem's article appeared, Betty Friedan published The Feminine Mystique, often credited with inciting feminism's second wave. The 1960s would also see the birth control pill, in addition to court rulings that would strike down laws that interfered with its distribution. As feminists became more vocal, Hefner and Playboy would find themselves in its cross hairs. An infamous protest outside the 1968 Miss America pageant had feminists burning copies of Playboy and Cosmopolitan, plus bras and girdles, as symbols of female oppression.

By 1970, Hefner had a television appearance interrupted by protesters, and a "curse" from a radical feminist group calling themselves Women's International Terrorist Conspiracy from Hell (WITCH), who wrote, "h.h.--Wherever you go; Whatever you do; The Black Hex of Death is upon you." Letters to the magazine implored Hefner to make a statement on women's lib. Protests outside the magazine's Chicago headquarters became a persistent nuisance. Hefner relented, describing what he perceived as two types of feminism—the more moderate form pushed by Helen Gurley Brown at Cosmopolitan, and the militants protesting Playboy: "Though we are opposed to the destructive radicalism and the anti-sexuality of... militant feminism, our position on women's rights... is as consistently liberal as our position on all human rights. We've been crusading for a long time for universal availability of contraceptives... as well as for the repeal of restrictive birth control laws... We believe that any woman who wants to shun the homemaker's role for a career, or who wants to combine both, should have the opportunity to implement that decision... We believe that many distinctions, apart from the purely physical, do and should exist... This leads us to conclude that there should be distinct social roles for men and women."

For much of the 1960s, most of Hefner's industry contemporaries would only hire models in one shade. In 1965, Jennifer Jackson, the first African-American Playmate, was featured in a centerfold—31 years before Tyra Banks would grace the cover of Sports Illustrated’s swimsuit edition. Throughout the '60s and '70s, Playboy would continue to feature more women of color in the magazine. Despite this, Playboy is known for its blonde bombshells.

From Marilyn Monroe in the premier issue to the Girls Next Door of the 2000s, it's clear Hefner had a type. The preference for blondes has been frequently cited in feminist criticism, especially when suggesting that Playboy objectifies women by reducing them to hair color and breast size. This critique was especially acute when Hefner emerged post-divorce in the late-'90s, maintaining several girlfriends at a time. The Playboy look of this era was also criticized for straying far from the naturalism of the 1950s to obvious artifice—fake tans, fake hair, fake boobs. The complaint of objectification wasn't entirely about looks. Playboy's celebration of conspicuous consumerism had many feminists wondering if Hefner viewed women as just another bachelor pad accessory.

During the '60s, Hefner embarked on his own radical lifestyle change: staying home. Still in Chicago, he became less present at Playboy's headquarters, and innovated the home office by installing his own (complete with secretary). If he needed anything, it would be couriered via Playboy limousine. He eventually brought the party home too—the women, the food, the movies. In Bunny: The Real Story of Playboy, Russell Miller writes, "Hefner liked to describe the Mansion as a 'controlled environment,' by which he meant that he lived in a world that revolved entirely around himself."

Buying a Beverly Hills mansion in 1974, Hefner's hedonism reached new heights. Despite having long-term relationships, and even dabbling in marriage, no one would accuse him of monogamy. To some, this has been enough to accuse him of being abusive and manipulative. In the days since Hefner's death, a Cosmopolitan listicle on things Playmates have said about the dark side of life in the mansion has been making the rounds. For the most part, what stands out is that the women quoted were disappointed that a man running a media empire out of his home had some strict house rules, and surprised that an octogenarian's sex life came with some geriatric quirks. Some of the rules, like a longtime ban on Bunnies dating club members, were created to avoid the ongoing scrutiny of Chicago Mayor Richard J. Daley, lest Hefner be accused of running a brothel. Beyond the Cosmopolitan piece, there have been rumors of sexual violence plaguing Hefner and the Playboy empire for some time. Among the dozens of women accusing Bill Cosby of rape, some met the comedian when they worked as Bunnies. And yet, in Bunny, Miller writes of Playmates and Bunnies finding a safe haven at the mansion from abusive partners who would be prevented by security from entering.

Throughout the '70s and early-'80s, a specter of tragedy hung over the Playboy empire. Hefner's longtime assistant and confidant Bobbie Arnstein developed a drug habit after the death of her husband that led to her being swept up in an international drug trafficking case. Over the course of the investigation, two Bunnies in Chicago and Vancouver died of overdoses, and Arnstein eventually committed suicide. The most high-profile blow to ever strike Playboy was the brutal rape and murder of Playmate Dorothy Stratten by her estranged husband. The scrutiny of conservatives and feminists alike was at an all-time high, and in addition, the corporation was losing money on the Clubs and a misguided foray into the hotel business. Hefner's daughter, Christie, would take over in 1983, restructuring the company, closing the clubs, pulling away from the hotels, and revamping the magazine.

Hefner's legacy in regard to the sexual revolution and the women's movement is a complicated one. At his best, he encouraged people to pursue safe, pleasurable sex. He used his eye for talent to hire women at a time when even women's magazines wouldn't. Beginning in the early-'70s, the Playboy Foundation lobbied to legalize abortion, expand equitable education access for women, and equal pay. Occasionally, it picked up the legal bills of the feminists picketing Playboy. At worst, he was, at heart, a dirty old man who got lucky.

With Hefner's passing, it appears that his son, Cooper, is looking to reinvigorate the brand and its ideas. The uptick in encouraging discussions of consent are a step in the right direction.