BoJack Horseman and the Complications of Motherhood 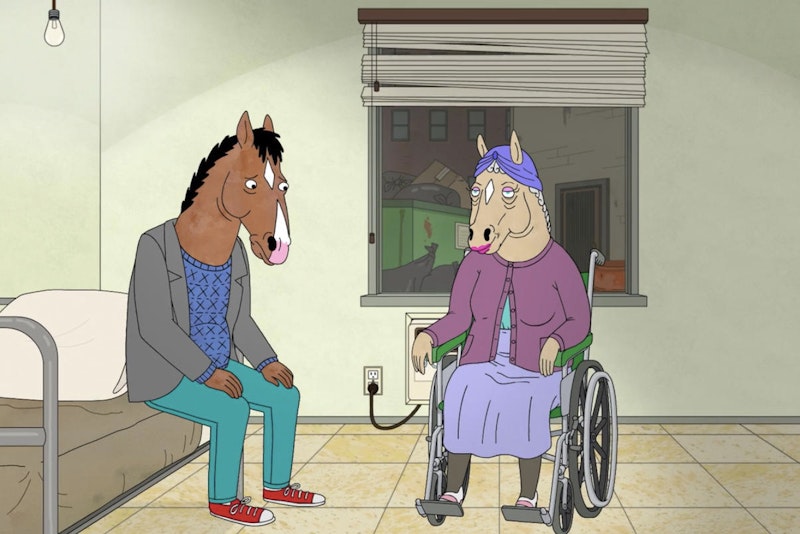 I didn’t expect to get a powerful and necessary message about motherhood from Netflix’s Bojack Horseman, but that’s exactly what the fourth season of the critically acclaimed animated series delivered. In two episodes, one at the beginning of the season and the other at the end, the backstory of Bojack’s mother, Beatrice Horseman, is told, complicating the previously black-and-white abuse she inflicted on her own son that’s generally used to explained Bojack’s bad behavior.

Episode two of the fourth season delves into Beatrice’s childhood, which was marked by both incredible wealth and unbearable grief. At a young age, Beatrice lost her brother in World War II, a loss that sent her mother, Honey Sugarman, into a manic depressive episode. Honey’s grief in the past is told alongside Bojack’s grief for his friend Sarah Lynn, who died in his arms, in the present. While Bojack’s subsequent mental breakdown doesn’t have heavy or permanent consequences because of his position as a wealthy male horse, Bojack’s grandmother’s grief for the loss of her child earns her a prefrontal lobotomy to control her “womanly emotions,” as her own husband puts it.

The prefrontal lobotomy was performed in the 1940s and 50s in the US to control mentally ill people, and was mainly performed on women and experimented on black people. The procedure causes Honey to become an empty shell who warns Beatrice to “never love anybody like she loved [her brother],” effectively teaching young Beatrice of the danger of feelings of love and care in a woman.

In episode 11, Beatrice’s backstory continues, revealing her as a rebellious teenager who struggled to conform to her father’s expectations. Already scared about the dangers of attachment and motherhood because of what happened to her own mother, Beatrice becomes pregnant with Bojack after a one-night stand with his father, a working class horse called Butterscotch who doesn’t call the next day, but marries Beatrice when she refuses to get an abortion.

Soon, Beatrice regrets her decision to become a mother and marry a virtual stranger, shifting all of the blame and abuse onto her son and husband. Beatrice’s unhappiness raises questions around the ungratefulness that comes with motherhood and women’s labor that’s performed for free. Distraught about how hard it is to care for a baby, Beatrice tells Bojack that “he better be worth it,” but how can one person be worth the abandonment of the person Beatrice used to be? More often than not, motherhood requires sacrifice, and it’s obvious that Beatrice underestimated the hardship of having a child.

The relationship between Beatrice and her husband Butterscotch becomes especially strained because of her wealthy background. She begs him to get a better job so she can hire help or at least lead a more financially fulfilling life. Beatrice’s higher class entitlement and the expectations of unpaid labor that come with her gender clash, producing a regret that she projects on her husband’s mistress: “Don’t let that man poison your life like he did mine… Please don’t do what I did.”

This portrayal of motherly regret, even if depicted by a cartoon horse, is important because it challenges conventional narratives around motherhood, and complicates the “blame the mother” trope that’s so often used to justify bad male behavior. Bojack spends his life struggling with self-worth that causes him to lash out, leaving him lonely and unhappy—which he openly blames on his mother. Motherhood is generally presented positively, as a calling and gift, but the much less happy truth is that it’s not for everyone.

Demonizing women who don’t fit that positive narrative doesn’t expose the hardships of childrearing, nor does it start a necessary conversation about how motherhood isn’t simply in a woman’s nature. Bojack Horseman decidedly humanizes the evil mother trope by relating Beatrice’s struggle to the oppressive expectations of her gender; she grows up seeing what “womanly emotions” earned her mother, and was forced to promise not to love unconditionally. Perhaps shockingly to some, Beatrice’s story proposes that it’s possible for women to regret not having an abortion, and leads the viewer to wonder: if motherhood were truly—both legislatively and culturally—a choice, would we be better off as a society?