Six feet under with Harvey Weinstein. 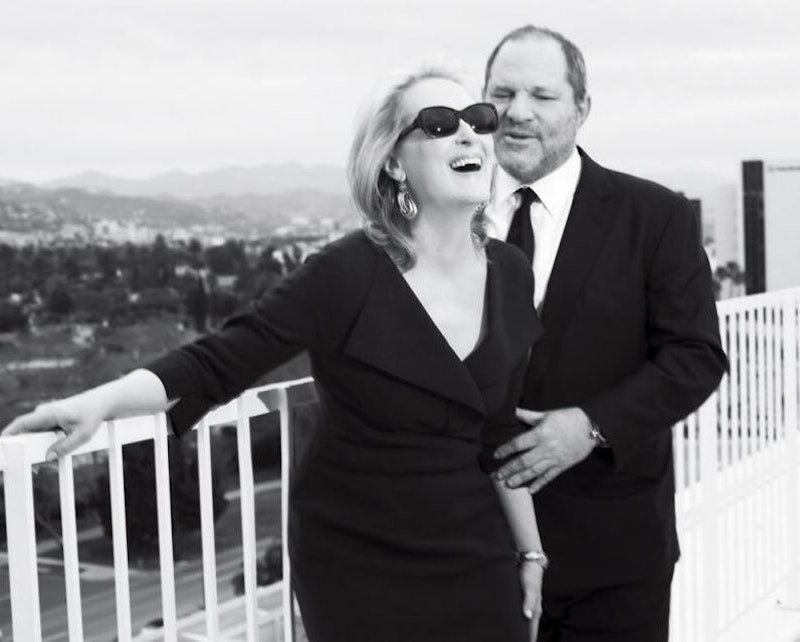 Harvey Weinstein fell but the structure still stands. Hollywood, like any other major industrial complex, is filled with open secrets, half-truths, sly favors, discrimination, and abuse. Harvey Weinstein has been coercing and manipulating and harassing women to do disgusting things to him since before I was born. Eight (known) settlements over three decades. Ashley Judd and Rose McGowan were the only famous actresses to come forward and speak with The New York Times about their own humiliating experiences with Mr. Weinstein when the paper published its extensive expose on the former Miramax and Weinstein Company executive on Thursday. Judd recalled thinking “How do I get out of the room as fast as possible without alienating Harvey Weinstein?” McGowan declined to comment to the Times, but wrote on Twitter the night before: "I want to buy the movie rights."

Since then, her timeline is full of righteous indignation, applause for other women who have come forward like Lauren Sivan and others like Mika Brzezinski, who withdrew from a three-book deal with Weinstein Books in the wake of the allegations. Yesterday, Jenni Konner, co-creator of Girls, said that Weinstein being fired by his own company “is going to scare any man in Hollywood using his power for anything but making movies and television.” She added that “I see this as a tipping point […] This is the moment we look back on and say, ‘That’s when it all started to change.’” Lord willing.

As the story snowballed, we saw a familiar pattern play out: a mind-numbingly stupid and tone-deaf response from Weinstein and his lawyers, one of whom described Weinstein simply as “an old dinosaur learning new ways” (She was promptly fired on Saturday). The same lawyer described her process explaining to Weinstein what he did was bad and why—as if he’s a ten-year-old boy. Weinstein’s attempts at sounding contrite in the Times piece, paired with his simultaneous lawsuit against the paper, which he alleges broke a deal with him and only gave him two days to respond, just made everyone look ridiculous and woefully inept. It reminded me of Jerry Sandusky’s phone interview with Bob Costas in the fall of 2011, and Anthony Weiner’s multiple mea culpas, and Bill Cosby quoting Fat Albert as he left the courthouse, and O.J. Simpson’s If I Did It, and all of the dense nonsense spewed by Roger Ailes and Bill O’Reilly after they were fired from Fox News. It’s not just that these incredibly powerful men only sound remorseful when their ass is on the line, it’s how inexplicably crippling their statements inevitably are, and how much they compound their own problems. Subconscious guilt burning bridges by doubling down? Or a truly pathological inability to shut the fuck up when it’s most necessary?

I think Konner’s sentiment is optimistic, and judging by McGowan’s tweets since Thursday, there are dozens and dozens more women that have refused to come forward even after Weinstein has been ousted and forced into early retirement. Everyone is on Adderall and the casting couch remains. The movie industry doesn’t need any more hits or unforced errors. Can’t wait to hear what Quentin Tarantino has to say about all this, how long he knew. But look at how BBC protected Jimmy Savile for decades. Same goes for the Catholic Church. It took thirteen years for Hollywood to dramatize that scandal with Best Picture winner Spotlight—I wonder how long until a rival studio whips up their own piece of pulp on the casting couch and people like Harvey Weinstein.