We're supposed to believe that Japanese life is a daily freak show. 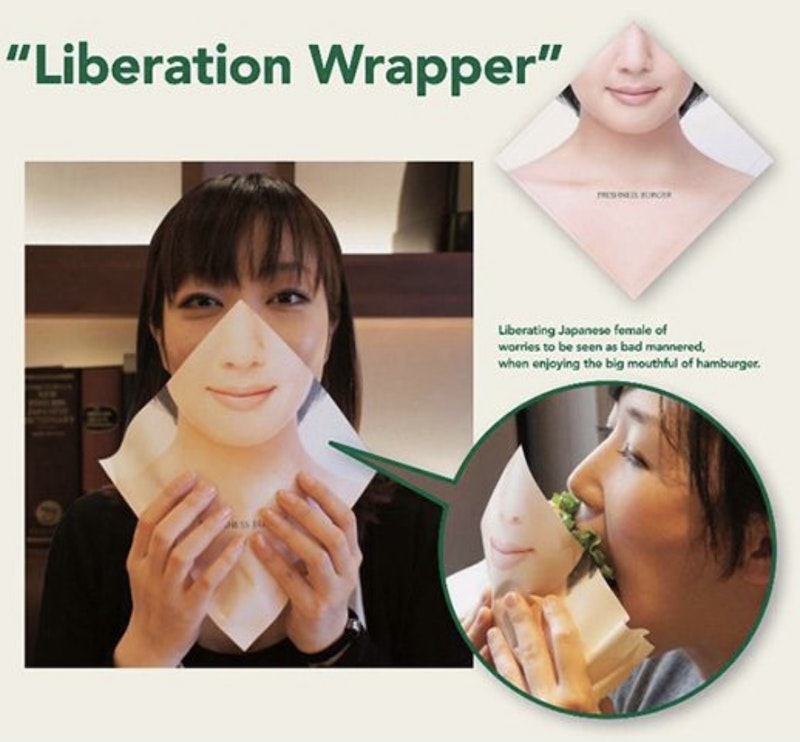 The French are rude; Germans have no sense of humor; and Americans are obnoxious. How about the Japanese? They are weird, or so the media tells us. The Japanese have their "bagel heads" who practice a culinary-themed form of body modification via a "saline inflation" process. A Japanese hamburger chain, Freshness Burger, invented a burger wrapper that women can use to shield their mouths while eating to appear dainty, as Japanese custom dictates. It's called the "liberation wrapper." And then there are the vending machines selling used women's underwear that are everywhere.

The media would have us believe that Japanese people, like the Floridians they also stereotype, can't get enough weirdness in their lives. But the bagel head phenomenon originated in Canada, and it was never the "crazy new Japanese fad" the headlines announced. Instead, it was fringe behavior blown out of proportion. Bagel heads were unlikely to be seen anywhere outside of fetish parties, and the media didn't report that the bagel shape on their forehead only lasted a short time because giving the impression that it was permanent was more sensationalistic. There were just a handful of those vending machines selling "previously owned" panties, but why advertise that when you're going for clicks? As for the burger masks, that's weird, but it boosted sales so I'd call it good marketing.

It's not that there isn't plenty of weirdness in Japan, but when you've never lived there and your image of the country is formed entirely by media coverage, reality gets distorted. I recently wrote about Hollywood Plays Itself, a documentary analyzing how the film industry shoehorns the entirety of Los Angeles into a handful of unflattering narratives. This is exactly what the media does to Japan. There's some truth behind the "weird Japan" stories, but the reportage makes it out to be a widespread phenomenon when it's usually something isolated, or even a hoax.

At one time we were led to believe that an eyeball-licking fetish known as "worming" was sweeping Japan's youthful population. The coverage on this "phenomenon" never failed to provide warnings about the health risks involved in this odd practice that was supposed to be pleasurable due to the many nerve endings in the cornea. As it turned out, this widely-covered story could be traced back to a single article on a fringe Japanese website using a single source—an anonymous teacher in a Tokyo primary school. It was an urban legend, but the story spread to China and, eventually, the Western media.

CBS News warned that eyeball licking carried the risk of blindness, and ran a quote highlighting the potential health hazards from Dr. Robert Glatter, an emergency medicine physician at Lenox Hill Hospital in New York City. CBS didn't bother contacting any ophthalmological associations in Japan, as Tokyo-based journalist Mark Schreiber did in debunking the story. Two such organizations told him they knew nothing about this dangerous new teenage craze. The Guardian was forced to retract its eyeball piece, but similar stories are still up on the Sun and the Daily Mail.

The New Yorker, once known for its obsessive fact-checking, has fallen for the "weird Japan" narrative. In a National Magazine Award–winning 2018 article, staff writer Elif Batuman reported on Japan’s rent-a-family industry, which involves paying actors to play absent fathers, husbands, children, and other family members. But this month, the magazine appended an editor's note on the story stating that three of Batuman's sources in Japan made false biographical claims to both the writer and a fact-checker, undermining the credibility of the entire piece. In 2019, the Japanese media produced evidence that an employee of Family Romance, the Japanese rental-family agency described in The New Yorker article, had falsely posed as a client of the company in a TV documentary.

When I lived in Japan, one of the weirdest things I'd see was people wearing surgical masks in public. Every single time I saw it I'd laugh to myself, but now I wonder if that was actually odd behavior. To the Japanese, the fact that Westerners don't take off their shoes at home is weird. "Weirdness" is often a subjective judgment. The media likes that angle because they can spend money on a story about, say, baseball in Japan, or they can rehash the latest "weird Japan" story that other media outlets have already run, which requires minimal effort. Some theorize that the media preoccupation with weird Japan is racist, but laziness and an addiction to clickbait journalism is the real cause. The media cover weird Japan for the same reason they the cover Trump's tweets—it's easy, cheap, and entertaining.

Japan's had 2877 COVID deaths so far, while the U.S. had over a hundred times that figure. Which country is weirder? Japan hasn't elected anyone near as freaky as Donald Trump.