The War On Tiki Bars

Our cultural watchdogs are telling us that they're "problematic." 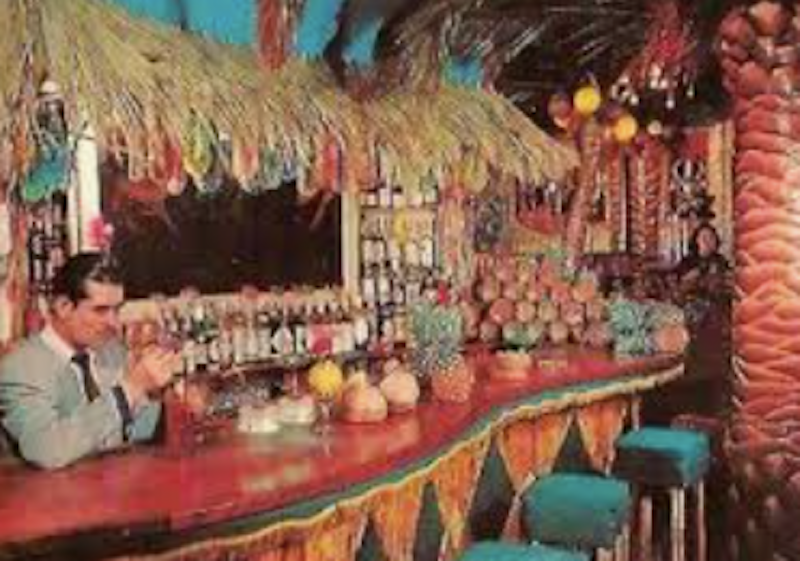 I've been to my share of tiki bars in Hawaii and Florida over the years. Their faux-Polynesian kitschiness makes for a fun, escapist atmosphere, but what I've heard lately indicates that the fun's illicit. That's what the ever-vigilant cultural appropriation police have been saying, anyway.

The New York Times has jumped on the anti-tiki bandwagon with a recent, smug article, "Reclaiming The Tiki Bar." "They provide an intoxicating escape from the burden of the world," co-writers Sammi Katz and Olivia McGiff tell us while a pandemic's raging, before going on to explain why we should feel guilty ("genre’s history of racial inequity and cultural appropriation") about seeking out this sort of escape. Among the numerous problems with the article is that it appears to be little more than a rehash of one The Atlantic ran over a year ago.

The Times story informs us of the "painful and unexamined" history of the tiki bar, but doesn't tell who's felt the pain and why, so I'll remain skeptical. The writers claim that even the booze the bars have always featured—rum—is problematic because slaves in the Carribean were once used in its production. But that's a stretch, as when Donn Beach (né Ernest Gantt) opened the first tiki bar in the U.S., Don the Beachcomber, during the 1930s in Hollywood, slavery in the Carribean had already been banned for nearly a century. Is cotton also problematic because American slaves were once forced to pick it?

Donn Beach was a visionary, but his tiki bar idea didn't catch on in the U.S. until after World War II, when returning soldiers deployed to the war's Pacific theater longed to recapture some of the flavor of the exotic locations they'd visited. The bars have drifted in and out of fashion since then, replaced by other fads, but they're currently enjoying a resurgence that has brought out the social justice critics along with the customers.

Katz and McGiff are concerned that "tiki bars can often reinforce the idea that Oceania is just a place to vacation." But even if going to tiki bars does make people entertain such a notion, I doubt that the people of the South Seas would have much of a problem with a fantasy version of their culture that might inspire Americans to visit their region and experience the real thing. The ones who might be troubled by the proposed "just a vacation place" scenario are mostly young Americans educated at East Coast universities.

Lost in this controversy are how South Sea Islanders—not people living in Brooklyn—feel about the tiki bar. If they generally don't find them offensive, is there even a controversy just because others want to take offense for them? When I lived in Hawaii, there was no particular resentment of the ubiquitous tiki bars from the people of Polynesian descent who make up such a large percentage of the population. I got the impression that they consider them cheesy, and put them in the same category that black people used to put the Hollywood Blaxploitation films—a contortion of reality done for profit that's not to be interpreted as actual cultural representation.

If tiki bars did claim to represent Polynesian culture, it’d be easier to take this matter more seriously, but they're a pastiche of concepts that were put in a blender, and what came out was just a fantasy that Americans find enticing as a vicarious form of travel. Still, if you live in the wrong place, you may have to shut your tiki bar down. That's what happened in 2017 in Corvallis, Oregon to Cloud Davidson after his place, the Hapuna Kahuna Tiki Bar & Kitchen, was open for just one week. Davidson was accused of cultural appropriation and insensitivity. He said that some residents of Polynesian ancestry, including those with the Oregon State University Asian and Pacific Cultural Center, complained about a number of things, including his use of a Hawaiian name for his place and the plastic leis that were handed out to customers. But nobody has exclusive rights to Hawaiian names, and if you don't wish to receive a plastic lei then don't go to the place handing them out. Davidson said that some Hawaiians and other Polynesians liked his bar and didn’t want him to change it, but he wasn't in a "majority wins" situation so he reopened with a new concept.

So many allegations of cultural appropriation rest on flimsy foundations that I've developed a reflexive distrust of all of them. Take the controversy surrounding the Washington Redskins. You'd have thought that Native-Americans were incensed over that name, but a Washington Post poll found that 90 percent took no offense. If tiki bar owners want to remove any representations of Pacific Islanders' gods and religious symbols from their mugs and wood carvings, that wouldn't be a bad idea, but I wouldn't stay away from one that didn't. Nobody has a patent on their own culture. Taking these vindictive culture cops seriously just emboldens them to police more vigilantly and shut down businesses they disapprove of.

This isn't the time to attack bars and restaurants because you have a "feeling" they're offensive. The pandemic's killing them already and the government appears not to care. Nobody should be piling on businesses facing mass extermination just so they can score political points.