How Can Anyone Hate Adam Sandler? 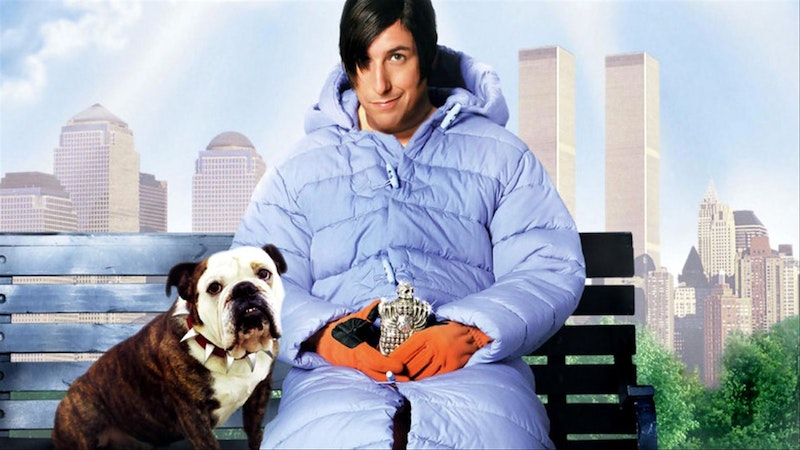 How can you hate Adam Sandler? It’s not in my DNA. Little Nicky, Big Daddy, Happy Gilmore, Billy Madison, Eight Crazy Nights, The Wedding Singer—these are foundational texts. Few comedians have had more influence on movies in the last quarter century than Sandler. Does anyone else even come close? Tim Heidecker and Eric Wareheim, but largely by proxy. Judd Apatow and his brood, sure. But everyone knows who Adam Sandler is, even though he hasn’t had a good movie in a while—that’s okay. He gave us Bob Barker on the golf course, missing breakfast at McDonald’s, all of Little Nicky, and of course, “I award you no points, and may God have mercy on your soul.”

Punch-Drunk Love was his only tour-de-force performance before Uncut Gems. In the 17 years in between, he tried here and there: first Spanglish in 2004, a muddle that I remember nothing about other than its runtime (131 minutes); and then Reign Over Me in 2007, a 9/11 movie that was more well-intentioned than the other two from the previous year but nevertheless a swing and a miss (his serious performance as a mentally ill man dealing with PTSD reminded me most of The Waterboy, unfortunately); Funny People in 2009, another overlong Apatow movie I only remember for its use of “1979” by The Smashing Pumpkins and how undeserving its use was. Looking over his filmography now, there are so many I forgot: Click, a pseudo-PKD pseudo-comedy snuck into multiplexes; 50 First Dates, the last of his classic comedies. He’s been prolific since 2015: a film every year and uninterrupted commercial success.

Why do the English hate Adam Sandler so much? Bile spills beneath a rave review of Uncut Gems by Mark Kermode for the BBC: “You mean to tell me Sandler makes comedies?” “There are societies that LIKE Adam Sandler comedies?!” “Right... so what is the film about?” “And the story is??” Despite giving Uncut Gems a positive review, Kermode has a three-minute wind-up about how awful Sandler’s comedies are (“absolute proper turkeys,” in his words). Even if his performance is properly praised, it’s always couched in the mutual understanding that he’s mostly a shit comedian and a shit filmmaker who doesn’t deserve any money from any civilized person. I wonder how the French like Sandler, if they adore him like Jerry Lewis. But of course that bizarre affinity is just as dismissive of Americans: the French like Jerry Lewis movies because to them, he’s the perfect avatar for the ugly, dumb American.

Film critics still have a massive comedy problem. More than any other genre, the critical response to a comedy is inversely proportional to its audience effect. Would Bridesmaids have had as much cultural impact if it had an all-male cast? No, because that would simply be Grown Ups, two movies orbiting around Sandler and SNL friends. To use snobbish critic criteria against them, Bridesmaids is just as “obscene” and juvenile in its humor as any Sandler or Schneider or Spade comedy, it just happens to be Melissa McCarthy shitting in the middle of a busy street, not Chris Farley. Bridesmaids is a good movie, Grown Ups isn’t, but “juvenilia” is not what cripples it.

Sandler’s classic comedies also all produced iconic characters: Billy Madison, Happy Gilmore, Bobby Boucher, Little Nicky (son of Satan), even the Opera Singer on SNL. These characters will endure long after he’s gone, just like how gangsters mannerisms coined by James Cagney have been passed down through Coppola and Lumet, and then Mann and DePalma, and onward and onward. Whether or not he gets the credit is another question (culturally, of course—because this isn’t a commercial issue, he's doing fine).

Then again, maybe it is: do people resent Sandler for, in their eyes, phoning it in with his Netflix deal, content to make shit movies for lots of cash? I suppose so: a recent episode of Chapo Trap House featuring the Safdie brothers was met with some bizarre dissenting comments, with multiple people saying they’d tuned out all Sandler-related media because he’s just a “craven capitalist” churning out crap to make money. These are the same people that criticized Joker, the most class-conscious movie of 2019, and proudly declared they hadn’t seen it and never would. Too bad: if those Tankies had ignored the misleading pre-release press, they might’ve enjoyed the most politically subversive superhero film yet made.

No one is worse than the Academy in recognizing good work. An anonymous voter in the actors' branch told The New York Post that Sandler's performance in Uncut Gems "'was a tour de force. He’s emerging as a truly great actor, but then he does cheesy Netflix comedies that are really dumb,' said the character actor. He admitted that, as with Hustlers, some voters may not even have bothered to watch Awkwafina’s The Farewell or Sandler’s Uncut Gems. 'There are a lot of movies, a lot of performances per year for us to watch. Unfortunately, actors become brands. Sandler’s brand doesn’t scream ‘Oscar,’ but Leo DiCaprio’s and Jonathan Pryce’s do.'"

Anyone who came out of Uncut Gems and didn’t think Sandler at least deserved a nomination for the Best Actor Oscar, I can’t trust them. Only Leonardo DiCaprio was better this year, his Rick Dalton (along with shoe-in Brad Pitt’s Cliff Booth) feels so real to me that when I think of a movie like Inception, or Ad Astra, or The Revenant, or Troy—I don’t think of Leo and Brad. I think of Rick and Cliff. But as far as Best Actor is concerned, DiCaprio’s performance doesn’t drive Once Upon a Time in Hollywood the way that Sandler’s Ratner does in Uncut Gems. It’s a modern classic, and as with Punch-Drunk Love, Sandler is responsible for a lot of that.

I remember Roger Ebert’s review of Punch-Drunk Love in 2002: “Sandler, liberated from the constraints of formula, reveals unexpected depths as an actor. Watching this film, you can imagine him in Dennis Hopper roles. He has darkness, obsession and power. He can't go on making those moronic comedies forever, can he?"

Well, he tried. And you whipped him for it. Can you blame him for Grown Ups? He was having fun with his friends. At least Sandler isn’t a prick like Jerry Seinfeld, or a stubborn transphobe like Dave Chapelle (having said that, his 2011 “turkey” Jack and Jill was roundly roasted for being unfunny and offensive). He doesn’t have the miserable, bitter disposition of a dying Jerry Lewis being interviewed by a poor Hollywood Reporter employee on his first (and presumably last) assignment. Will Sandler ever give monosyllabic answers in an interview out of spite? Has he ever walked out of an interview? Has he ever had any battles in the press or PR disasters? No, he’s handled himself remarkably well. What’s not to love? Give the guy a fucking break—and an Oscar.