Man Gave Names to All the Animals 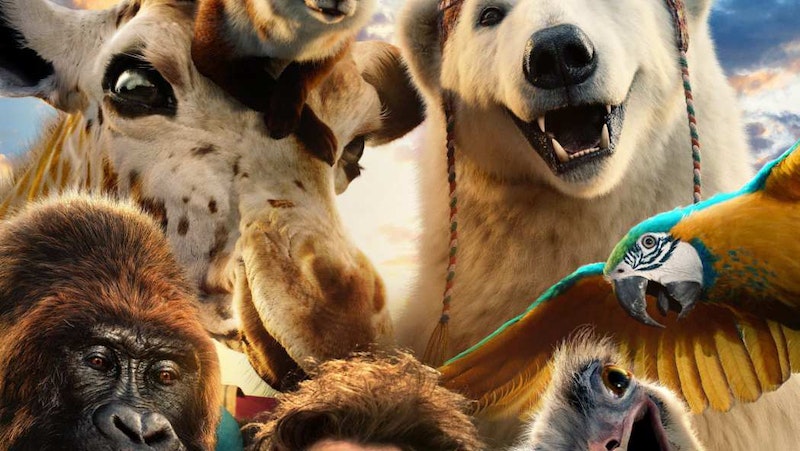 There are so many bad movies made and released today—for example, Bad Boys for Life and Sam Mendes’ sterile and wholly unnecessary “prestige” offering 1917 (which my son Nicky eviscerated recently)—that the venom directed at the pretty funny and largely anodyne Dolittle is puzzling. The Washington Post bragged that Dolittle was the first film to “have the esteemed honor of being this newspaper’s first zero star review of 2020.”

The New York Times’ Manohla Dargis called it “a dreary, overextended yawn,” and in comparison to the rest of her review that was tame. Her conclusion was typically arch: “Increased awareness of our contemporary environmental crisis might explain why, unlike the [Eddie] Murphy movies, this ‘Dolittle’ is set in the past. Because if animals really could talk, they wouldn’t be pleasantly cooing and chatting us up as the world burned. They’d be screaming.”

God almighty, if there are any decision-makers left at the Times, give Dargis a slot on the op-page and be done with it.

I suppose Dolittle is an easy target, perhaps a stand-in for critics to vent about a film industry that’s loaded with vapid superhero movies, remakes and exceedingly dumb comedies. And Robert Downey, Jr.—I can’t remember the last time I liked one of his movies—turns in a slack performance, definitely the worst aspect of the fairy tale.

Also in the Post, Bethonie Butler resorted to this cliché in rounding up negative snippets about Dolittle: “Godspeed to parents of such children as you head to the theater this weekend. May these withering lines prepare you for the one hour and 41 minutes you’ll never get back.” If we’re thinking in that vein, I’ll never get back the time I wasted reading The New York Times’ rambling interviews with Democratic candidates in preparation for their “dreary” and toothless double endorsement of Elizabeth Warren and Amy Klobuchar, an exercise that showcased a lack of clarity on a topic of obviously far more important than a movie. While Klobuchar was no doubt delighted, the slip-slidin’-away Warren must’ve been pissed. Which I find most pleasant.

My wife and I saw Dolittle last Sunday afternoon—reluctantly, I’ll admit, since January’s film offerings aren’t top caliber—and enjoyed it thoroughly, perhaps because we had few expectations going in, and were prepared to do a runner if it was awful. It wasn’t: as noted in this space before I like talking animals (and not just my boyhood favorite Mr. Ed) and got a boot out of a macaw, squirrel, gorilla, polar bear, ostrich, glasses-wearing dog, duck, giraffe, tiger, dragonfly, dragon and mice yapping it up, and bossing Dr. Dolittle around. Emma Thompson voiced Poly, the hilarious macaw that runs the show and is de facto leader of the menagerie.

It’s all a little silly, as Dolittle and the critters go to great lengths to save the young (early 20th century) Queen of England, mixing in modern colloquialisms like “my bad” and “bro”—I wish Bernie Sanders was in the film; he’d be a lot more comfortable in that setting than the stuffy offices of the Times, or anywhere near the living-in-name-only Hillary Clinton, who declared that “Nobody likes [Sanders], nobody wants to work with him, he got nothing done,” and said, in a huge boost for the Vermont senator, that she didn’t know if she’d endorse him should he face off against Trump—as they do battle with Dr. Blair Mudfly, played by a hammy Michael Sheen. As I said, the film is slight, but no more so than the universally beloved Paddington, and it was refreshing not to endure about 500 explosions and a hundred shootings on the streets of Miami.

As is the case with films like Dolittle, there’s no need to pay rapt attention—no subtitles, no convoluted plots—that gives you time to let the mind wander. I like that: you’re in a dark place, the background of a pleasant film, and with no electronic devices, a perfect time to consider the windmills of your mind. I pondered the latest weird comment by Joe Biden (in his fruitless Times interview, which may or may not be fake, but that doesn’t matter much, when we’re considering the craic-a-crazy O’Biden), when he said: “By the way, and that’s what some of these Bernie people don’t get. You have to get to the center too. It’s, I was eating a corn dog the other day, this is like a corn dog, with some mustard. When you get to the middle, it’s hard and tough, and dry [CHUCKLES] but you have to eat that too. You have to eat that to finish it. But it’s hard.”

Say what? Biden’s either playing the Trump non-sequitur card (usually planned to confuse dumb reporters) or he’s lost his marbles. It reminded me of 24-year-old Bob Dylan’s press conferences in 1965 when he’d toy with interviewers by rambling on… and on about bent carnies, peg-legged thieves in El Paso, midgets playing violins in a wide-open plantation, grifters with the brains of Rimbaud, the inspiration he drew from drinking red wine in New Orleans graveyards at one a.m., laying dead carnations by mausoleums, smokin’ farmers’ daughters, the forgotten Joe Louis and Josh Gibson, Persian fevers and the new Dewey Decimal system he was about to create. If Mayor Pete knows all the words to the national anthem, dollars to doughnuts (or corn dogs) that Biden can recite “Absolutely Sweet Marie” line by line.

That segued into thoughts about MAGA Catholic Boy Nicholas Sandmann and his windfall (and his lawyers) from CNN, which settled out of court recently in a defamation suit against the teenager. No number was thrown out, but it was rumored to be in the $25 million range, a pittance for CNN which enabled them to avoid a jury trial where who knows what dirty dealings by the fading network would crop up. I’m looking forward to seeing what The Washington Post and NBC, also sued by Sandmann, does: if the paper also settles, that’s very big news and no doubt will bring forth a raft of more litigation against media organizations. I hope Jeff Bezos orders his staff to go full throttle and defend itself in court. That’d be a five-star carnival that’d make Trump’s daily jazz look as flat as a John Kerry joke.