Plus, 1994 miniseries of The Stand found lacking. 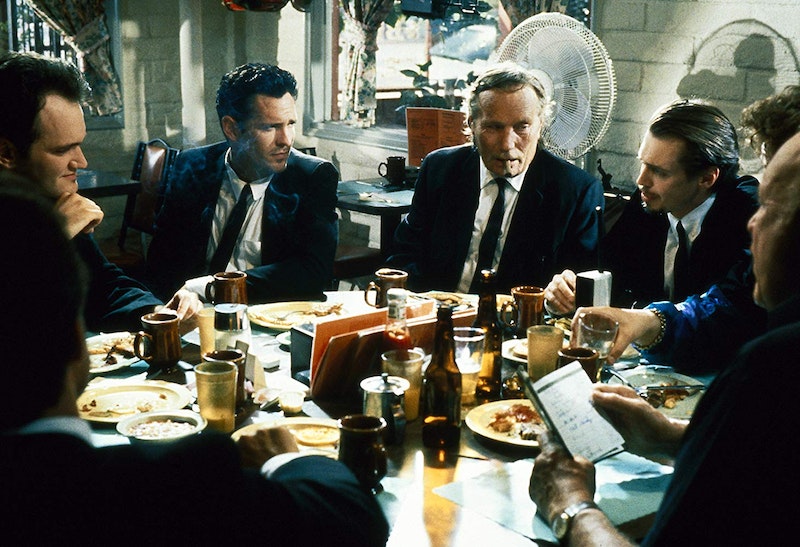 “Nah, nunna that bullshit!” barks Lawrence Tierney. “Here’s how it goes: skinny ties, suits. Everybody wearing the same. You got it? The ties, the suits, everybody sitting at the table and you’re bantering. Then everybody gets up. You all go out the door together and you cross the parking lot together. The six of you. Then you go rob the jewelry store. After sitting in a public place all dressed the same. Maybe the diner’s got a security camera, they can see all of us together. No security camera, okay, there’s diners, there’s patrons. They can see us and maybe they want to know, hey, why all suits and ties? It’s fucking Los Angeles 30 fucking years after the Rat Pack, these people got suits and skinny ties and they’re all walking out at the same time like it’s fucking formation. People can see that and they can ask themselves, Hey, who are those guys? What are they doing? People in the diner ask themselves that, this caper’s gonna work.

“Another thing. Names. Who are you? That’s right—Mr. Blue. Who are you? Yeah—Mr. Orange. Code names. Okay, who am I? Yeah, Joe Cabot. Anybody asks who I am, that’s my full name, first and last. And who’s this? Yeah, Nice Guy Eddie and he’s… You got it, he’s my son. Okay, okay. Everyone got the idea? In case the cops get you, none of you gonna know each other. All you’re gonna know is the name of the guy who organized the job and the name of the number-two guy, who’s his son. You got nothing else to tell them. Just the names of the two guys who put this all together and who know everybody else’s name since we hired you. We do it like that, everyone’s going to be okay. And yeah, we’re gonna sit with you in the diner. In case there are security cameras.”

DVD corner. The 1994 miniseries made of Stephen King’s The Stand somehow turns out to be mediocre. Everything’s done as if people will have to watch, not as if they’ll want to watch. Loud or quiet, active or still, gunshots or conversation—it doesn’t matter. The scenes all settle in a heap and lie there until the lights go out. The show’s lackluster, mushy-kneed hopelessness surprises me because it’s been forever since I watched a network miniseries. Now I relearn the old lesson: eight hours at one go is too much for a TV network. Like a pat of butter spread over a freeway, the intelligence and talent at the network’s disposal leave immense bare patches, bare patches that we call Molly Ringwald and Rob Lowe. Gary Sinise is the lead; he seems to be saving his energy. King wrote the script, Mick Garris directed.

Perhaps there have been no more network miniseries since cable took over quality drama. If so, The Stand is a late-stage dinosaur. By 1994 the beast had lived beyond Ernest Borgnine and Jan-Michael Vincent. Now it fed off ex–Brat Packers. Someplace there may be a miniseries with Judd Nelson inside it (corrupt senator, jittery scientist?). The Stand serves this evolutionary purpose: because I watched this thing, I won’t watch that other thing.