No Love at First Bite

New Netflix adaptation of Dracula by Steven Moffat is a dud. 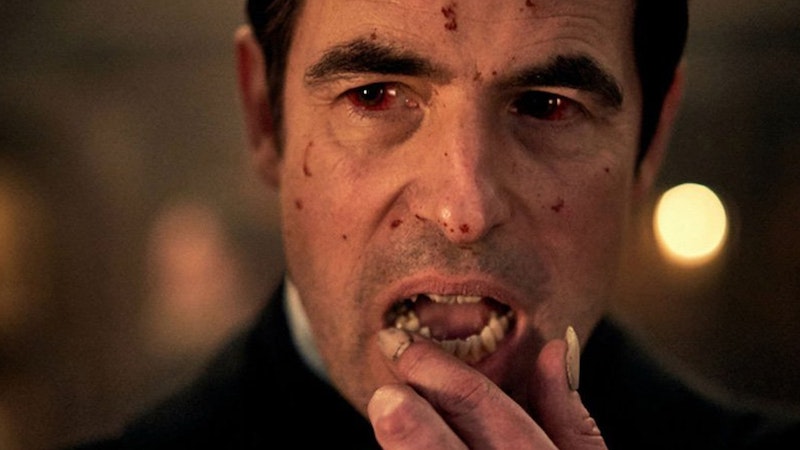 Adapting a classic novel isn’t easy. The audience has preconceived notions what the story is or ought to be about, and there’s a level of expectation and prejudice. Mark Gatiss and Steven Moffat have adapted the horror classic, Dracula by Bram Stoker (BBC production, currently playing on Netflix). Gatiss and Moffat are no strangers to adaptations of classic works. They’re responsible for updating Arthur Conan Doyle’s famous detective, Sherlock Holmes. That show has been successful with both British and American audiences, and for the most part, it’s done well. This isn’t true of Dracula.

Like Sherlock, Dracula follows the same pattern: television series with three 90-minute episodes. This presents a problem because most television series turn into soap operas. Thankfully, Dracula doesn’t slip into that and there are plenty of dramatic and frightening moments (look for a twisted and undead baby) but after the first episode (“The Rules of the Beast”), the drama and the symbolism of a vampiric force begins to wane.

Following Stoker’s plot, the first episode takes place in 1897 where we witness a British real estate solicitor, Jonathan Harker, assisting Count Dracula in purchasing property in England. Very quickly, he begins to fall under the Count’s spell, who needs more fresh blood to revitalize his undead being. As Dracula feeds on Harker, Harker begins to wither away, and Dracula grows stronger. Despite Harker’s transformation into an undead creature, he still maintains some level of strength and mindfulness, and explores the secrets of Dracula’s dark castle. Its labyrinthine ways are mysterious and Harker is determined to solve the puzzle of Dracula.

This is where Dracula more resembles Sherlock—its fast-moving camera work, dripping blood, and the aspect of solving a mystery (an unwelcome and rather awkward insertion into the story). All of this is told in a reflective approach to a nun, Sister Agatha Van Helsing. There’s no Dr. Van Helsing, a man who fights Count Dracula, but a woman, who’s rather un-nun like. This wouldn’t be entirely bad because there are many religious characters in mystery novels who aren’t traditional. Ellis Peters’ monk Cadfael comes to mind. However, Sister Agatha is a woman who didn’t want to be trapped in a loveless marriage so she joined the convent; she’s not particularly religious, and her faith is filled with cynicism and even contempt for Christ. Her personality is forced and she sounds more like a rendition of any woman detective in a contemporary television series—hellbent on proving that men are chauvinistic pigs and women can be detectives, too. All of this feels clumsy, and instead of taking this change as an opportunity to create a difference between good and evil, God is just another aesthetic fetish and affectation.

Episode two, “Blood Vessel,” takes place on a ship, Demeter, bound for England. Count Dracula is determined to find some fresh blood of a higher echelon of society, as opposed to all those Transylvanian peasants that have given Dracula barely any vitality and power. The events that occur on the ship are removed from the original story. The plot’s driven by a curious collection of characters, all upper class. Sister Agatha is there too, although it’s not clear how she ended up there. At this point, Dracula feeds on almost all of the passengers and some crew members, before the ship’s set on fire. Dracula’s in his coffin and ends up on the bottom of the sea, only to be revived 123 years later by Dr. Zoe Van Helsing, a great-great niece of Sister Agatha.

This is when things really get rotten. The entire third episode (“The Dark Compass”) is as undead as the hapless victims imprisoned in Count Dracula’s castle. The temporal placement of the plot into contemporary times could’ve been done well if the writers retained even a semblance of the central notion of Stoker’s novel. The idea of Dracula or any vampire is more about the mythological aspects of this creature, as well as the subconscious fears that are within us and not within the vampire. It’s about the fight between good and evil, and the aesthetics and tools of our contemporary culture shouldn’t take precedence over the substance of the story.

What makes the final episode even more unbearable is that it’s dull. The character of Lucy Westenra is reduced to just some party girl, but this has no power whatsoever because our current society has become so secularized and amoral that her behavior is completely acceptable as opposed to the Lucy Westenra of the Victorian era.

Zoe Van Helsing oscillates between her own personality (which is meek due to her illness) and the forcefulness of Sister Agatha and once again, she’s more of a feminist, British woman detective than an equal adversary to Count Dracula. The only part of the last episode that’s worth watching is the last four minutes or so when Dracula and Zoe/Agatha have sex, which was too short.