You decide: Skippy or Jif. 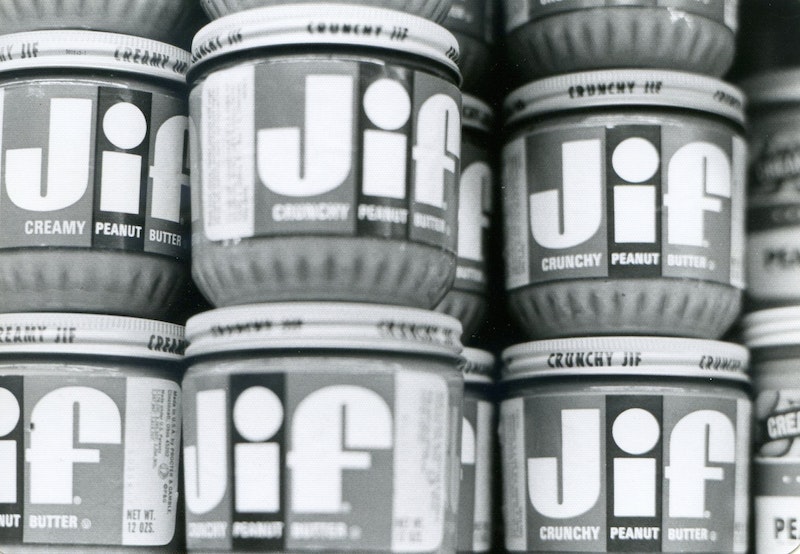 I can’t remember the last time I ate a peanut butter sandwich. Is that peculiar? Didn’t think so, until I read a post my longtime friend Jeff Murray wrote on Facebook, extolling, at age 66, the pleasures of the high-calorie spread. I’ll return to Jeff below, and a recent email he sent on the subject, but for now, let’s concentrate on Skippy, Jif and other varieties of most children’s favorite kind of food. The picture above, taken on a lark in ’74, with a font that was typical of the time, was rescued from a box of college snapshots. As a kid, I preferred Jif to Skippy, but that didn’t mean much to my mom, who almost always stocked our larder with the latter, probably because it was two cents cheaper by the jar. Or maybe that’s unkind, and my view was a minority in our household. Jif was a tiny bit sweeter—probably also the reason I opted, when possible, for Miracle Whip instead of Hellman’s—and that was appealing.

As I recall, when I was very young peanut butter was a vehicle for jelly—Welch’s Grape, always; don’t think I was even cognizant of the word “jam” (in its most innocent meaning) until later on, and certainly not “preserves”—to be slathered on Wonder Bread or Levy’s Rye in a two-to-one ratio to the Skippy. But I lost my taste for jelly by third grade or so, and switched to peanut butter & Velveeta sandwiches, peanut butter & leftover pot roast and on occasion peanut butter & pickles. Or, making myself a plate of canapés while watching Mr. Ed, re-runs of I Love Lucy or The Twilight Zone, I’d have Ritz Crackers “sandwiches,” stuffed with peanut butter. Even then, I felt bad for my dad when my mom would pack his lunch for a day at the car wash, and, in a rush, cobbled together a couple of peanut butter sandwiches. That had to be depressing, but as was his wont, he never, ever complained. Some might say he was enabling my mother in her total disinterest in preparing food, but I think he was simply the epitome of a good sport.

Now, here’s a twist. It was Christmas Day in 1970, and my friend Bobby Walton—after our respective families had exchanged gifts—came over in the afternoon for a couple of hours of sledding down one my neighbor’s steep hills. Bobby, on a high horse, was filling me on the details of a Huntington High School senior’s wild party a few nights previously—we were both sophomores—which I’d missed for some forgotten reason. Maybe I didn’t like the host or had a babysitting job, but in any case, it was a mistake. He told me about a popular jock, drunk as a skunk, dropping trou and chasing after one of our fellow 10th graders, a swell chick who was terrified by the sudden madman, yelling “I want to fuck you!” There was a lot of booze swilled at this no-parents zone, plus joints passed around like candy cigarettes and, apparently, some free-love calisthenics in a barely-lit living room. Bobby claimed he got some action, but I could tell by his eyes that he was fibbing. Still, that was enough gossip to last a week.

Kind of bummed, after we’d finished dodging trees and cars with our sleds, a few cuts and bruises to show for this interaction with nature, I went home and read every single word of the explosive John Lennon interview in the latest Rolling Stone. John was pissed—and RS proprietor Jann Wenner egged him on to spill the beans on the evil, money-grubbing, no-talent McCartney, primal screams, goddamn Yoko and what a scam The Beatles were. Even then I knew that John was either on the spike or stoned with an Arthur Janov-cocktail of drugs, and was venting to Wenner, but even if he was fabricating and varnishing the truth, I couldn’t get enough of the Working Class Hero’s bile. This isn’t a mere digression, for I was also munching on a new product—Skippy’s cashews—that was under the tree for me that morning. Man, that was eatin’!

And after that my peanut memory is mostly blank. Yes, I dabbled in the organic (and really oily) peanut butter at the food co-op Sam’s Belly in Waverly as a college sophomore in ’75, but not much. Much later on, when my kids were tots they obviously ate a lot of PB&J sandwiches while parked in front of the tube, but I never snuck even a bite. Zero interest. And, frankly, the thought right now of digesting a peanut butter sandwich, no matter how fancy the bread, makes my stomach flip. Not like a dish of steamed cauliflower, or an antipasto plate of head cheese and olive loaf, but pretty close.

Which brings me back to Mr. Murray. He wrote: “The peanut butter monkey remains on my back. He’s bound and gagged but immune to Stockholm Syndrome. He will never be my friend. Not 10 minutes ago, no joke, I was at my grocery store in Saugerties, NY and the peanut butter monkey was kicking up a terrible fuss as I hurried along that awful aisle, averting my eyes from The Stuff in its manifold oily, sweet, junky variations. Goes straight to the Goober Gland, you know, no fuss or muss with any digestive formalities. For a moment, it makes everything all right. You’re no longer desperately hungry, but you want more. That is, until you’re scraping the bottom of the jar with a butter knife and at last you’re a little sick, and sad.”

I got a little “sick” reading that, but it’s entirely possible that Jeff has the same feeling about my “Cheetos monkey.”