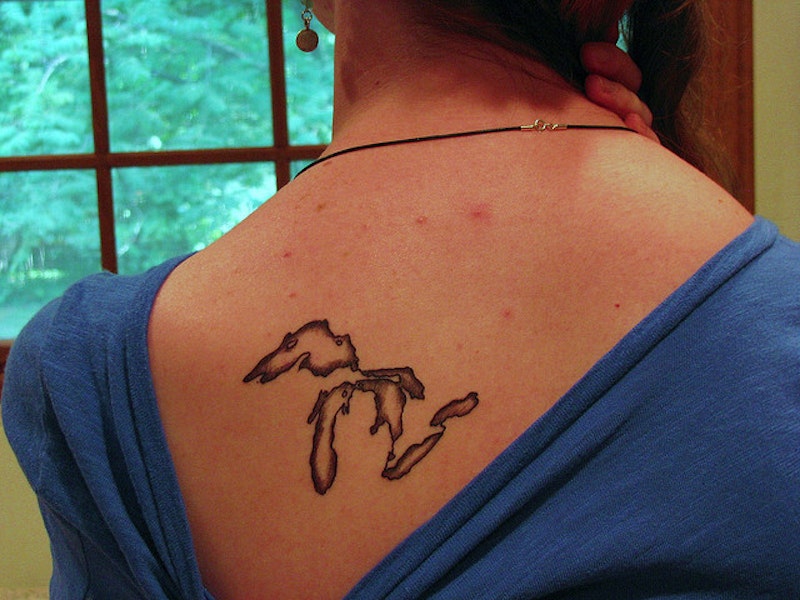 For some reason I’m completely obsessed with getting a tattoo on the meaty part of my right arm. No stupid pictures or color or anything like that. When I’m 45 I don’t want to wonder why I got a picture of the Lady Gaga egg tattooed on my ass cheek, though that would be fun to talk about at my tenure review hearing. I’m actually thinking a little simpler, a little more minimalist. Maybe a word spelled out in gigantic letters. Or if not a word, maybe a few rectangles or some lines traveling from my wrist to my inner arm? That could be kind of cool.

The hardest part about getting a tattoo is figuring out what the hell kind to get. That little image or word needs to basically sum you up and evoke your “youness.” A tattoo is a branding after all, and when you get one you’re branding yourself in all the literal senses of the word.

A month ago I had this great idea about getting the Fibonacci Sequence on my arm. 0,1, 1, 2, 3, 5, 8, 13, 21, 34. It represents truth and beauty, two things I’m totally about. But then a friend of mine (thankfully) ruined that when she said, “Oh, you want to get numbers on your arm? You mean like what they did to people in the Holocaust?”

And that was the end of that.

The problem with tats is that you can’t just get one, and you can’t stop at just a tat. I plan to supplement whatever tat I get with gauges in both my ears. Not the real gauges, because I can’t be having my ear lobes dangling all around like that. “Fake Gauges”—regular earrings that give the illusion of a gauge while leaving your earlobe fully in tact. Very emo, I know, but there’s something endlessly appealing to me about this look. Let’s call it Adult Emo, because in any given city there are grown ass adults running around with gauges and fake gauges and piercings.

For me, the whole thing about getting tats and piercings is about solidifying a look—this kind of rock-and-roll-glamour-intellectual-chic. You know, mostly black clothes, perhaps torn, a silver ring on every finger, 10,000 bracelets on each wrist, and some kind of intellectual ink on my arm. On special occasions I can’t wait to wear a gauge in one ear and a gigantic, completely obnoxious chandelier earring in the other.

All my obsessions over earrings and body art have led me to wonder what’s so appealing about body art? Is it something sporadic you do on a drunken night out with Shontay?    Or is it something you plot and obsess over for weeks on end?

There’s a longstanding myth in popular culture that nothing’s sexier than a girl or a guy with a school of strategically placed tattoos. The myth probably has a lot to do with how attracted you are to edginess and risk, and the assumption that a dude/girl with a tattoo flies by the seat of their pants. That somehow, having a tattoo amps up your sexiness and says something about your desirability.

Sociologists and theorists of identity have argued that we often fashion ourselves after the kinds of people we’re attracted to. It’s interesting to think about, right? How many of you dress the way you do because you’re basically trying to bait some hot bro or chick? The kind of girl you like is only into preppy guys, so you dress preppy. Or whatever.

But even as I might be attracted to implied “edge” in other people, I don’t think I’m fashioning myself that way to attract that. Fashioning an identity is this really complicated thing where it’s simultaneously about the rejection and projection of an image. When we get dressed we’re saying to the world “Hey, I’m just like you, but I’m actually not at all like you.”

Style creates community, one that helps mediate relationships between people with like interests. The irony of all this, though, is style in the age of uniqueness, when everybody thinks they’re unique when the only way to be unique is to be exactly like everybody else.