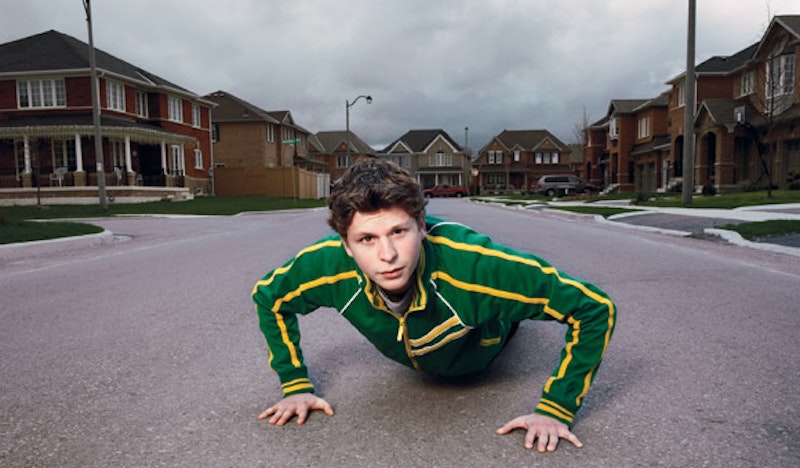 When Michael Cera dreams of unicorns, he also dreams, simultaneously, of Unicron (link: http://en.wikipedia.org/wiki/Unicron), which is jarring and incongruous and hard to explain during therapy sessions.

Michael Cera is still bummed that he wasn’t able to score a starring role in Kick-Ass.

If you encounter and recognize Michael Cera in passing, on the street or something, and you greet him in an informal way—“Hey, Michael Cera!” “Michael!” “C-Dog!” or more ridiculously, as “McLovin”—Michael Cera can be depended upon to reciprocate with a wan, noncommittal “What’s up?” and a tight, twee smile. What you will not be able to recall afterwards: whether Michael Cera’s teeth were visible, even briefly, when he smiled, or the exact color of his eyes.

Right now, Michael Cera is wearing his Rastafarian dreadlock wig entirely without irony; he’s at home alone, rocking the wig in tandem with a Bob Marley tie-dye toga for no other reason than because he can, and because Cool Runnings is on cable again.

Over the past several years and scores of magazine profiles, Michael Cera has cultivated something of an anti-mystique mystique that suggests that, at heart, he’s just a regular guy whose career is a happy accident, that he doesn’t really care about being famous, that, really, he doesn’t much care, that maybe he’s shell-shocked by celebrity and is in some sort of denial. This is bullshit, because in reality, Michael Cera loves celebrity, craves it, can’t get enough, it’s like near-pure smack or that ring Frodo’s trying to protect, it’s so powerful, and so Michael Cera is constantly Googling himself via his iPhone, demands that his publicist send him any and all media clippings she stumbled upon, takes every critical slight personally, is endlessly baffled and sent into hyperventilating fits by the conventional wisdom that “Michael Cera” is shorthand for a strain of developmentally arrested man-child and a widely mocked and derided sub-genre of early 21st century cinema.

It makes Michael Cera so mad, almost mad enough to tell Hollywood to fuck off, to drop the fuddy-duddy nice-guy act and make the leap into building and managing white-slavery rings full-time, up until recently Michael Cera had only been dabbling, a triple dead-bolted tenement basement here, a padlocked trailer in the middle of a shipyard there, but maybe it’s time to man up on this thing, to jump in with both feet, as it were.

Michael Cera only watched Napoleon Dynamite once, because it hit a bit too close to home.

Even at Sesame Place, Michael Cera is bringing his heat.

After a vigorous, pulse-pounding workout—either pedaling his 10-speed through L.A. or a marathon Wii bowling session—Michael Cera likes to unwind with Wow Wow Wubbzy DVDs and a chalice of lambs’ blood.