Superman For a New Generation

The genius of One-Punch Man. 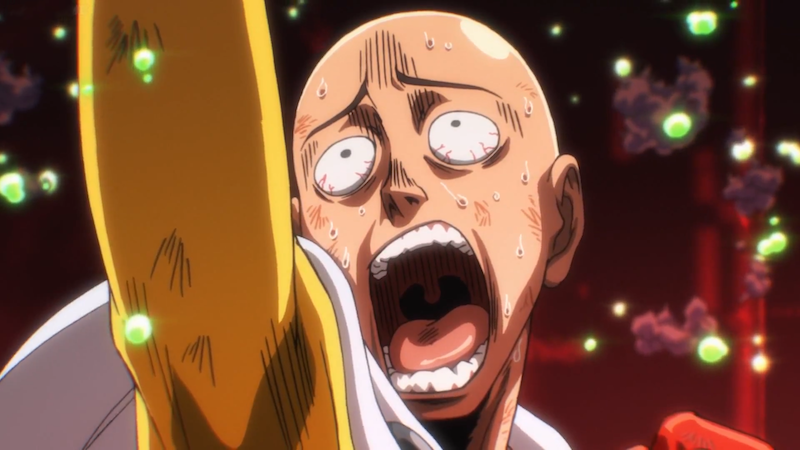 I’ll get this out of the way: One-Punch Man is the most important comic series of the past decade. The storyline engages with themes of boredom, the dangers of a phony meritocracy, and the inability of even the “greatest” among us to make the slightest change to a rotten status quo. It’s intended as a satire of the entire spandex-and-super power genre, and it often succeeds. Most of the time, though, it’s just heartbreaking.

The manga, a collaboration between author One and illustrator Yusuke Marata, follows the adventures of Saitama, a bald-headed superman who can kill almost any creature in the universe with a single blow. However, he’s also a feckless underemployed millennial, living in a shoebox-sized apartment in a polluted city that eventually winds up destroyed by one of those extinction-level threats he always dispatches with the greatest of ease.

Meanwhile, the world is ostensibly policed by the nonprofit Hero Association, a bureaucratized network of powerful beings ranked according to their strength and effectiveness. Outside of a handful of talented “S-class” heroes, these people are mostly just rent-seeking careerists looking to manipulate the system to rise in stature, thereby earning higher salaries and lucrative endorsement deals. Many of them, particularly those clustered at the bottom of the hierarchy, are simply regular men and women with a bit of martial arts or military training.

If one goes by their performance in the manga, the heroes are often completely ineffectual, even well-meaning ones like Genos, a cyborg-killing machine who regards the omnipotent Saitama as his sensei. Unlike Saitama, Genos has tremendous tactical ability in combat as well as a long-term strategic vision (he hopes to capture an evil scientist); also unlike Saitama, his body is destroyed in every battle of significance, including once by another S-class hero who was merely irritated with his presence.

As the series progresses, Saitama slays one vicious monster after another, but his efforts do nothing to improve society. He eventually joins the Hero Association, but lacks charisma (his hero code name is “Bald Cape”) and progresses slowly through the ranks. The ease with which he kills opponents convinces the public that he’s cheating, somehow stealing his triumphs from the more deserving, better-known heroes who had been battered by the bad guys.

Meanwhile, as monster attacks increase, the heroes devote earnest efforts to outclassing one another, banding together into gangs for protection or hunting each other for sport. The shadowy figures who run the Hero Association also have their own agenda, working behind the scenes to research new weapons and other technologies for reasons that have yet to be revealed.

One-Punch Man is a timely updating of the Superman myth: what if you could defeat anything in the universe and nobody cared? Saitama, whose limitless powers were developed by running daily 10ks and doing push-ups, impresses no one. His accomplishments are denigrated by everyone besides Genos, a tired old martial artist named Bang, and a heretofore-invincible alien who was the first person to withstand multiple punches from Saitama.

The other super-humans, by contrast, either work overtime to keep their faces in the spotlight or are too unstable to do much good. Amai Mask, a powerful and sadistic hero, avoids encounters with ugly villains while occupying a Justin Bieber-esque niche in the pop culture of this fictional world. The Blizzard Gang, a group of middling heroes with modest powers, force other heroes to join them so that they can take down monsters at less risk to each individual member. And the less said of Puri-Puri Prisoner, a “hero” who decided to voluntarily imprison himself so that he could sexually assault bad guys, the better.

Many great works of literature, such as the short stories of Flannery O’Connor, focus on the struggles of people to communicate with one another. One-Punch Man is no exception. Every encounter between heroes is characterized by a tremendous disconnect. Nobody wants to listen to anyone else, and the results are continued chaos and pointless violence.

Saitama, who has the strength to change everything, is too focused on clipping coupons and playing video games to do anything beyond the bare minimum, remaining oblivious about the affairs of the world until he’s forced to exterminate dangerous foes at the last possible moment. His heroic counterparts are endowed with varying levels of virtue, but are too busy maximizing their own personal interests to accomplish anything noteworthy. While they plod along, hundreds of thousands of normal people die, their lives lost to abstract threats—fiery explosions and laser beams from UFOs—that they never could’ve comprehended. The tragicomedy at the heart of One-Punch Man is as old as time: competition for merit, money, and scarce resources causes everyone to behave in monstrous ways, and not even the most powerful monster-slaying force in the universe can make a difference.