The Enigma of Takeshi Kitano

Madcap comedian to the Japanese is known as worldwide auteur. 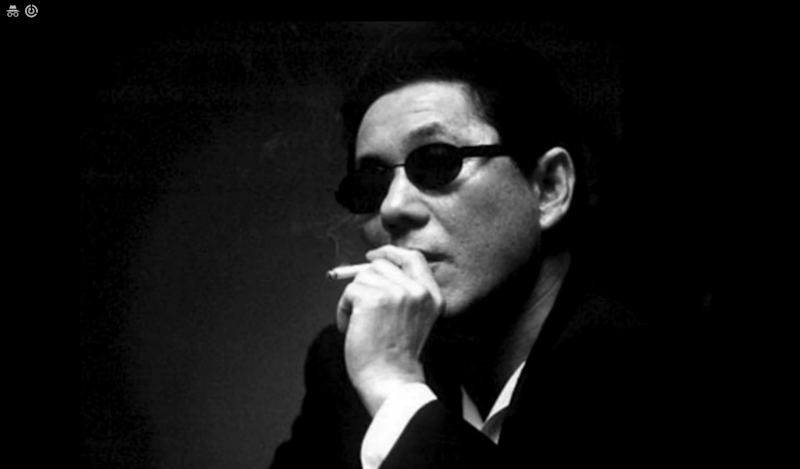 Takeshi Kitano is Japan’s best kept secret, although you’d have a hard time finding an adult Japanese person who hasn't heard of him. The following words are all applicable to the 69-year-old: comedian, TV show host, movie director, painter, newspaper columnist, sculptor, actor, poet, film editor, author (50 books), screenwriter. He can even do a mean tap dance.

Kitano's like looking at a lenticular print. What you see depends on the angle you view him from. If he came to your attention from watching his Tokyo Broadcasting System TV show, Takeshi’s Castle, you'd be surprised to learn that he’s also an acclaimed actor and director. The program, which became a global cult hit, was a screwball game show. Kitano was just messing around for a nice paycheck. Imagine Francis Ford Coppola hosting The Price Is Right. When Kitano’s in his comic or acting persona, he's known as Beat Takeshi, which is the stage name the Japanese know him by.

The few Americans who are aware of Kitano are mostly arthouse film buffs who, if they were suddenly exposed to his Takeshi's Castle persona, would be baffled. It's like discovering your doctor is a sidewalk busker on weekends. Kitano’s known as a comedian and ubiquitous TV presence at home in Japan, and acclaimed auteur abroad.

An English language trailer for one of his films describes the Japanese polymath as equal parts Jim Carrey, Howard Stern, and Martin Scorsese. That's not a bad start, but there's a major omission. Jim Carrey may apply loosely when he's Beat Takeshi on TV, but in his film actor persona names like Steve McQueen and Clint Eastwood come to mind. On the wide screen, Kitano follows the “less is more" school of acting. Watching his films, you get used to seeing his granitic face whether he's getting ready to kill someone or just smoking a cigarette. He amplifies his powerful screen presence with silence.

Kitano’s film work is where his talents are best showcased. He's partial to making yakuza films. They suit the ex-boxer, who’s a natural badass skilled at using his rugged face to conjure up menace. Moving up the ranks on the comedy circuit in his early performing days, Kitano mixed with gangsters. He once mused publicly that, if not for his mother, he'd have become a yakuza himself.

Kitano uses violence, but not in the extended way a fetishist like Quentin Tarantino does. His violence is quick and brutal, and then it's over. He understands its cinematic power, and uses it like punctuation. The viewer never gets bored with his mayhem, as can happen with Tarantino.

Hana-Bi (1997), in which Kitano starred, wrote, directed, and edited, exemplifies his minimalist approach. His character, Nishi, says almost nothing for the duration of the film. You can't find anything to cut from it because he's already stripped it down to its bare essence. Nishi’s wife is suffering from leukemia. He never talks to her, but she needs only his presence. Kitano plays an ex-cop who turns to crime to pay his wife’s medical bills. There's a scene where he stabs a yakuza debt collector in the eye that's as gruesome as it is quick. Then the film is right back to scenes of peaceful contemplation, often at the beach, the director's favorite backdrop. In one scene, Nishi returns home with two pastries and spends two wordless minutes with his wife. She takes his pastry for herself and hands him back the strawberry on it. She pours tea for him, and then tries to light a cigarette. He takes it out of her mouth. They're re-enacting familiar rituals of intimacy.

Kitano’s films are stylish and beautifully framed. Their minimalist, experimental electronic soundtracks, often by composer Joe Hisaishi, compliment the starkness on the screen. In Violent Cop (1989), he sets a street fight between two combatants to a jazz score and runs it in slow motion. In Zatōichi (2003), a period drama, he brought in tap dancers for the film’s ending, dressed them as farmers and carpenters, and had them dance to hip-hop beats.

In Sonatine (1994) perhaps Kitano’s most fully-realized film, he depicts a nighttime gangster-style massacre simply with the flashing lights of gunfire in a window. He just hints at the extreme violence inside. Tarantino would have elaborately choreographed it, milking it for maximum gore. The director draws from his comedy bag in this yakuza tale, devoting much of the screen time to his character, middle-aged gangster Murakama, goofing off on a beautiful Okinawa beach with his underlings as they wait for action. In the film's most delightful scene, he enacts a sumo-wrestling match in the sand. Kitano knows non-stop action experiences diminishing returns at a certain point. He's playing his favorite role in Sonatine—the weary gangster who doesn't fear death because he's had about enough of life already. He can still have fun on the beach even as he senses that death is on its way, because death equals relief.

Watching a clip of Beat Takeshi in his early stand-up comedy days, you’d wonder how he arrived at his laconic widescreen persona. He was a motor-mouth then, as he is in many of his TV appearances. Some actors wisely choose minimalist acting, relying on their screen presence because they're not that skilled with words. Beat Takeshi, the film actor, had options however. I'm not clear on his motivations, but his choice to emphasize the visual aspect makes his work and aesthetic much more accessible to the international audience.